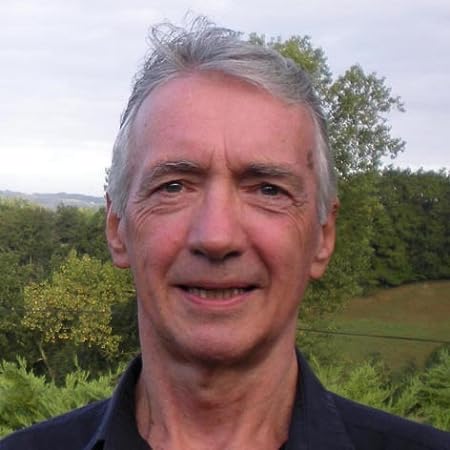 Hi ... and welcome! I have worked briefly as a UK tabloid journalist and I have just completed A RISING STAR - a romance saga I greatly enjoyed writing. I have also written four dark humor thrillers where my main character, Rudi Flynn, is a London based US journalist who drinks too much, keeps getting diverted emotionally by attractive women, and reluctantly agrees to become a US/UK secret agent. In UNDER COVER, DARK CLOUDS and HARPS & TEARS, my man Flynn is up against nasty Islamic jihadists who want to nuke London, Paris and New York. While in WEIMAR VIBES his target is the evil Oscar 'Führer' Kerner, who is trying to drag the UK and Europe back into a Hitler horror scenario.

I grew up in Ireland, where the Holy Ghost Fathers were grim, but girls from the Jacobs biscuit factory were great. I wrote short stories at Trinity College Dublin before moving to the Athens Daily Post. Here, in the port of Piraeus, worldly dark-haired women asked if one might like to have a good time, while in Syntagma Square tourists talked admiringly about the Acropolis and the Parthenon.

Back in London on my first booze-fueled tabloid it was 'deliver, or you're out!' So as an assistant leader-writer I duly attacked the Germans in 60 words while praising the virtues of British farmers in 120. It was much the same on tabloids two and three where I occasionally invented disgracefully scandalous stories about celebs, politicians and others who happened to be in the news ... but then I started writing fiction ... which I love!

My Amazon author page is at amzn.to/1B32gsa and my International Author Network page is on http://bit.ly/1CapXQX There are blogs and excerpts from my stories on my writerrowan.com website at bit.ly/1a4d4bt and I'm with Twitter @WriterRowan. 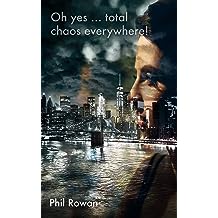 Oh yes ... total chaos everywhere! Jul 17, 2019
by Phil Rowan
$2.99
Journalist Rudi Flynn is recruited by the US State Department to try and get a handle on what's happening around the world, where populism and right-wing tendencies are seriously escalating. First off it's Europe with riots in France and bombs in Dublin. Then it's the sinking US Rust Belt, followed by drug-infested Mexico and serious problems for governments in south America. There are LGBT activists campaigning in Trinidad as wealthy tourists are harassed in Jamaica, while in Cuba an Army General offers help in trying to halt the massive transition of drugs up to the US and Canada.

Australia, Japan and China are faltering as the US President fires a missile into the sea close to North Korea. The French Interior Minister is shot in Paris, and there are resonances from the Nazi days in Eastern Europe as Flynn hears tales of what's driving the increasingly dictatorial leaders and their promiscuously inclined female advisors. Terrorists explode a bomb outside London's Victoria Station, while in the North of England impoverished teenage girls complain about being forced into prostitution by Pakistani migrants. There are riots in Stockholm and Holland is no longer a liberal hub.

As Flynn flies back to the States the airline pilot says that non-nuclear North Korean missiles have just hit New York, where Flynn's apartment building has collapsed. There is then a move by Russia and China to get a proper peace treaty going with the US in Moscow. It works well and when Flynn returns to Washington his wife Maria has come to see him. They were on the point of getting a divorce, but she now wants to start a family, which may be feasible as Flynn has just been offered a job in Washington with US Homeland Security.
Read more 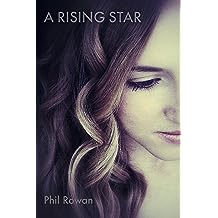 A Rising Star Apr 23, 2017
by Phil Rowan
( 1 )
$2.99
A couple of students at Trinity College in Dublin quickly get the attention of an influential Hollywood agent. Playwright Jack Flynn is contracted as a script-writer, but it is his girlfriend Maria Reilly - the star of his Dublin play - who really makes an impact, first in a ten-episode Hollywood series and then in a film as a widow who saves her deceased husband's floundering advertising and media business from collapse.She impulsively stopped taking contraceptives when she met and fell for writer Bertie Windsor in India, but she is now pregnant. He proposes on a bended knee, and she accepts. So they have a wedding ceremony with a few guests for a celebratory lunch in California, and Maria is taking a call from her Irish sister when her contractions start. She then delivers a boy, with assurances from her Hollywood producer that he will wait for six months before starting on her final series, which will have Maria as a US Presidential candidate.
Read more 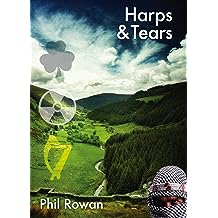 Harps & Tears Feb 18, 2013
by Phil Rowan
( 4 )
$2.99
Harps & Tears is a dark humour thriller that centres on Bronkovski: a Polish American nuclear scientist whose wife left him for a Jewish environmentalist. He is furious, and intent on revenge against the state of Israel. When we meet him, he is making a nuclear bomb in rural Ireland's West Cork for ruthless Islamic activists.

Briefly ...
We start with US journalist Rudi Flynn arriving in Dublin. His editor in New York is really into the Land of the Harp. She wants all he can send her on Celtic Tigers and New Irish Women. Flynn, however, is more interested in a lead he has on the embittered nuclear scientist, Bronkovski, and what he may be up to in West Cork.

Our frequently wayward journalist is lured in and seduced by Irish charm and blarney - although he is aware of a powerful Dublin businessman, who knows Bronkovski, and who has politicians and cops in his pocket. Flynn's local contact, Muldoon, is up for a bit of devious blackmail, and our guy's hotel receptionist, Siobhan, agrees to seduce and probe the emotionally challenged nuclear scientist. Middle East money is funding an assassin in West Cork, while in Dublin an Israeli academic is targeted. There are ruthless rogues everywhere, but Flynn has a few cool female allies - and as his local contact takes a crucial call, mayhem is averted in rural Ireland.
Read more 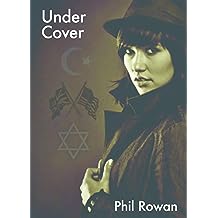 Under Cover Jun 4, 2012
by Phil Rowan
( 2 )
$2.99
Under Cover has right-wing/anti-immigrant tendencies escalating in Europe with increasing conflict between moderate Muslims and radical Islamists. American journalist Rudi Flynn is recruited by a US/UK intelligence team to counter Iranian activists who are plotting to nuke soft Western targets.

Briefly ...
A French writer Flynn knows is shot in the Paris Luxembourg Gardens and has his throat slit by an Islamist assassin who shouts 'Allahu Akbar!' as his target collapses. Flynn befriends his murdered colleague's sexually pro-active and occasionally quite outrageous right-wing Front National mistress, Chantelle. He also works with Sophia, a seductive and very attractive Israeli agent who briefly kidnaps him in India. He is then sent to Cuba to check out a French Algerian Muslim by Leah, his Controller at the US Embassy in London. Here he gets a pointer from the Guantanamo detainee, who professes to be a Muslim moderate, but is later shot as an activist. Flynn's double agent act finally falls apart in Paris. The Iranian nuclear bombers want to execute him, and it's about to happen when Sophia and her Israeli associates come to his rescue in the remote French Correze countryside.
Read more 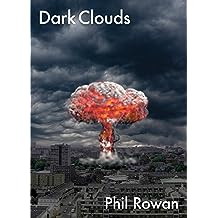 Dark Clouds Dec 30, 2011
by Phil Rowan
( 7 )
$2.99
Dark Clouds centres on al-Qaeda terrorists who hope to cause nuclear mayhem in London. The main character, Flynn, enjoys a drink and is empathetic with friendly females ... but is he really up for tackling dangerous Islamic jihadists – people that see Westerners as misguided infidels who need to experience the purifying wrath of Allah?

The bad guys want to irradiate 'decadent' Brits, who are perceived as enemies of Allah. It is scary, but a US/UK Security Service team believe that Rudi Flynn can help them avert disaster. His Muslim American girlfriend, Faria, fell with the North Tower in New York on 9/11 and he is now working as a journalist in London. He is trying to forget what happened in Manhattan on that fateful Tuesday, but he still has some Islamic contacts. One of whom, Rashid, is in the loop with jihadists and wants to cross over.

Flynn is wary about going undercover, but an oil rich Syrian he knows is suspected of funding the bad guys. On the up side, he has just met Ingrid – an artist who invites him to join her on a Greek island where he can write about a fiery Fenian ancestor. This won’t happen, however, unless he delivers for Carla Hirsch: his ice cold and very focused US Homeland Security controller.
Read more 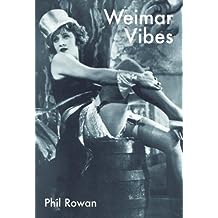 Weimar Vibes Sep 15, 2011
by Phil Rowan
( 6 )
$2.99
Set a few years hence, Weimar Vibes is a dark humour story that mirrors elements of the economic, political and social mayhem that erupted in Germany during the late 20s and early 1930s.There is chaos on the streets. Oscar 'Führer' Kerner is whipping up an anti-immigrant frenzy in Europe. UK Defence Intelligence recruits Rudi Flynn, an alcoholic American journalist. They want him to win Kerner over and compromise him. He can then attract escalating right-wing support in the UK, while working undercover for Her Majesty.

Flynn is reluctant. He yearns for Guardian (left/lib newspaper) reader Julia Stein and doesn't want her thinking that he is a deranged neo-Nazi apologist. But the situation is serious. Flynn's mentally unstable wife is in the care of nuns in Alabama. He is broke and can't pay his mortgage; so he either signs up for the Brits as a strident right-wing Nationalist or he gets repossessed.

We start with explosions in Morocco and the main character, Flynn, being hit with a brick during riots in a Paris Muslim banlieue. We finish with troops on the streets in London and the British Prime Minister announcing that elections must be postponed.
Read more