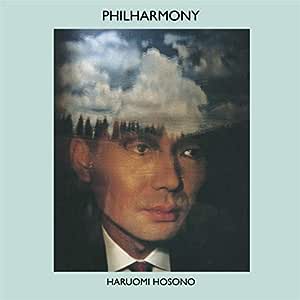 Following YMO's first wave of success, Hosono took a break from the group and, with help from Alfa Records head Kunihiko Murai, established Yen Records in 1982. The label's inaugural release was Philharmony, a masterwork recorded almost entirely by Hosono himself at his brand new LDK Studio. With unlimited studio time and freedom to explore, Hosono let himself loose with an array of synthesizers and the latest gadgets, from the Prophet 5 to the E-mu Emulator - all listed as "guest performers" in the album credits. Inspired by the possibilities opened up by these music-making tools, Hosono found new ways to approach his songwriting, resulting in a set of songs that showcase his ability to constantly and consistently innovate and create new standards. With ambient synthscapes like "Luminescent/Hotaru" and the abstract sample-based expressionism of "Birthday Party" sitting perfectly in tune alongside pop favorites like "Sports Men" and "L.D.K.", Philharmony is one of the most well-loved of Hosono's albums, and a favorite of the artist himself.

Benjamin E Andreu
5.0 out of 5 stars A Piece of Musical History
Reviewed in the United States on December 4, 2001
Philharmony is indeed a bit of musical history, now conveniently availiable in CD format. Haruomi Hosono is without a doubt one of the most original and creative minds in popular music within the past 30 years, essentially pioneering many genres from world music to techno to ambient to trance during his long, varied career. His 1978 classic, Cochin Moon, basically wrote the book on modern electronic music. While Philharmony isn't quite as impressive, it still belongs in the canon of all time legendary electronic albums.
This CD captures Hosono's genius, as he deftly uses the (then) emerging technology of digital sampling, later made popular by the likes of everyone from Stevie Wonder to Peter Gabriel to the Orb. Keep in mind that this album was originally recorded all the way back in 1982 (coincidentally the same year compact disc technology began revolutionizing the recording industry), and represents the first time digital sampling was ever used to construct an entire musical album. It begins with Picnic, a quirky little instrumental that is neither ambient nor structured, but in a league, like so many of Hosono's works, all by itself. The second track, Funiculi Funicula, is a uniquely Japanese and more uniquely Hosono-esque "adaptation" of the traditional Italian folk song. Hotaru is more trance-like, and builds more successfully on the use of digital sampling to create its simple but irresistable "groove".
Platonic, not exactly a pop tune, but too strongly rythmic to be ambient, may be very well be the ancestor of the techno trance sub-genre of the 90's. Another great example of Hosono's precocious use of the technology of the day. The two pop songs on the disc, LDK and the ever catchy Sports Men, are very much in the YMO vein and come off mostly as showcases for Hosono-sensei's strange sense of humor and clever use of everything digital.
The real ambient pieces on the album, Birthday Party and Air-Condition, are typical Hosono all the way - eerie, dark, a-musical, enthralling, and even aggressive; finally disintegrating into a loose cloud of fractured noise. These two tracks are actually the antithesis of the harmonic, relaxing, passive, and even genteel ambient style developed by that other musical trailblazer of the 70's and 80's. Brian Eno, this is most definitely NOT!
The title track is simply incredible. Philharmony is a brilliant display of musical technology for technology's sake, as Hosono uses only a digitally sampled voice to construct the entire piece. But at the same time the track is a testament to Hosono's irreverant take on avant-garde composition and song structure, destroying once and for all the era of the primitive, unimaginative tape loops that hallmarked the styles of Eno, Robert Fripp, and so many others during the 1970's. Musical history indeed.

R M SMITH
4.0 out of 5 stars a national anthem
Reviewed in the United States on May 6, 2001
If your a fan of y.m.o you'll love this cd, it's kind of a long the same vein as 'technodelic'. Song's like LDK would have quite easily sat in the recording. Within the first few seconds of the first track PICNIC you know what your gonna get. Beautifully odd strange electronics leading straight in to a load of robots singing their song as they go on a day out. The next song FUNICULI FUNICULA seems to be a national anthem for some kind of army stuck in a video game...honest...you'll be huming it as well! Harry Hosono manages to make the most quirkiest music beautiful he kind of catches you off guard. One minute it's all tongue in cheek the next he puts up some straight forward(ish) electro it's a mixture of both instrumental and words all be them odd; 'my loves like a tear-jerker, like mouldy junk food' but anyway a good album if you want a bit of fun and can listen to music that doesn't take itself too seriously... I wouldn't play it to anyone though!
Read more
2 people found this helpful
Helpful
Report abuse
See all reviews