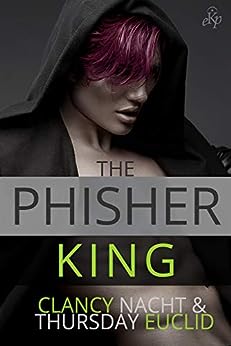 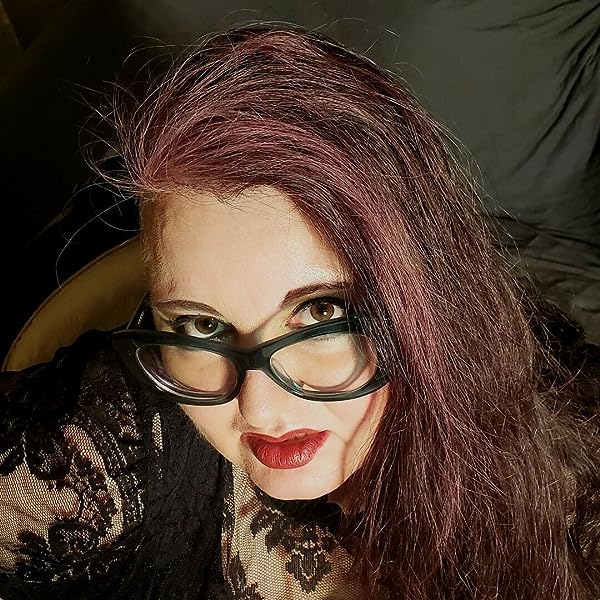 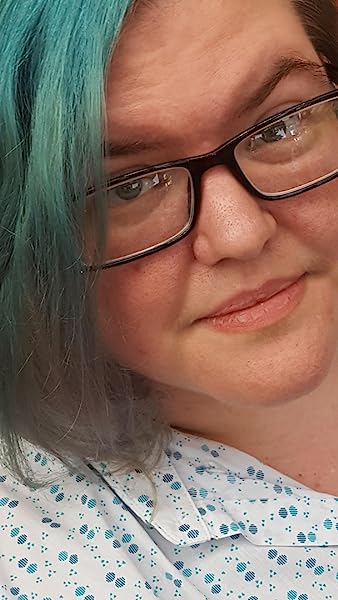 by Clancy Nacht (Author), Thursday Euclid (Author) Format: Kindle Edition
Book 1 of 4: The Phisher King
See all formats and editions
Sorry, there was a problem loading this page. Try again.
In his nightly ritual of trolling dude-bros online, college student and hacker Hunter Walsh uncovers a terrorist plot to bomb Seattle Pride. When his digging hits a wall, he anonymously surrenders his findings to the FBI—only to discover he didn't cover his tracks as well as he'd thought. Agent Callum Riggs shows up on his doorstep with an ultimatum: Help the FBI find the culprits or face jail time for his hacking. Hunter hates and mistrusts the Fed, but he has no other choice.

Straight-arrow Cal has better things to do than babysit a pink-haired criminal—even if Hunter is everything Cal wants and has never let himself have—but he can't ignore the lethal threat Liberty Association poses to their community. When the Bureau refuses to allocate more resources to the case, Cal is forced into a devil's bargain, not only tolerating Hunter's rebellious behavior in exchange for his help but serving as Hunter's personal bodyguard 24/7.

Will these total opposites work together to foil a deadly plot? Or will their constant bickering and seething sexual tension endanger everything both men hold dear? And if they do succeed, can enemies become lovers, or will their differences keep them apart?

Veronica Lynn Pit Bull
VINE VOICE
4.0 out of 5 stars Sweet, cute and a little funny
Reviewed in the United States 🇺🇸 on January 1, 2023
Verified Purchase
The Phisher King is a cute story with likable characters, a little action and intrigue, a decent emotional connection between the MCs and no real angst. 31-year-old FBI agent Callum Riggs is really buttoned up. He isn’t in the closet, but he’s always tried to be the picture of conservative, normalcy – to prove to his parents that being isn’t going to destroy his chance for a successful, respectable life. (Spoiler alert, his parents are jerks - and now I sound like Cal, but they’re not actually in the book). Cal tries to be the picture of professionalism on the job to include never swearing at work. Which is honestly just bizarre. It took me awhile to get used to it as his character quirk; because no normal person would take it to the extreme that he does. But that’s the frakkin way his cockadoodie character is written, God darn it all to heck! Obviously, the absolute last thing that Cal should be doing on the job is lusting over 22-year-old, pink haired, pierced, sassy-brat criminal hacker Hunter Walsh.

Hunter is a sympathetic character. He’s not really a criminal. Well, he does do some technically illegal things. But he’s also a college student. And mostly he’s just young and a weird combination of idealistic and disillusioned. He also has jerk parents, thereby proving people should not be allowed to procreate indiscriminately; and a somewhat tragic but not entirely fleshed out backstory.

The real star of the show is Bruiser, or Bru to friends and family. Bru would be Cal’s yappy little, Napoleon complex, sweater wearing rat dog. Cal is fairly FBI straight-laced Butch to Hunter’s semi-twinky punk; so Bru was the way Hunter could tell for certain that Cal really was batting for the other team and not just pulling Hunter’s leg to gain his cooperation. The award for “most character emotional growth” also goes to Bruiser the Pomeranian.

The plot is pretty straight forward. Hunter enjoys hacking and trolling, and when he stumbles upon some alt-Right psychos planning a Pride Day massacre, he passes the tip on to the FBI. The FBI, having all their resources allocated to important things; requires Hunter’s ongoing hacking assistance. Cal and Hunter are forced into close proximity and opposites attract with a surprising level of emotional development. There’s some miscommunication and misunderstandings and past experiences and inherent personality traits mucking things up; but shockingly they end up talking to each other. There’s no relationship drama, a little bit of a Daddy-vibe that apparently gets highlighted later in the serious, some hurt-comfort caretaking and a kickass little dog. TPK is sweet and cute and a little funny.
Read more
Helpful
Report abuse

Rebecca Slone
VINE VOICE
5.0 out of 5 stars 5*
Reviewed in the United States 🇺🇸 on February 22, 2020
Verified Purchase
Oh man what a book! I loved it! Hackers, FBI, catching bad guys, getting blown up. The only bad part. Homophobic buttheads that they’re trying to catch.

Hunter’s been in trouble before. He’s kind of used to it. Thanks for covering something up, he has a movie record on top of being in constant trouble for hacking. But in his haze of highness, he’s hoping the knock at the door is food. Only it’s not. It’s the FBI. And Hunter may be in bigger trouble. He’s been caught as being the anonymous tip, thanks to being in a high haze, and somehow did cover his tracks. Now he basically has a choice, help the FBI uncover the plot to blow up Pride or be in trouble. Not much of a choice really. And to make matters worse, Hunter and Cal are firing Sparks off one another. Hunter is using it to goad Cal and Cal is ticked off. But after Hunter’s apartment and is defiled, Cal knows he has to get him somewhere safe. So he takes him home. Not his ideal plan but he has no choice. Each day is torture. Hunter goading him or something. But they are still working on the case. But when Hunter pushes too far, Cal snaps and the passion explodes. The problem is Cal can’t get it out of his head Hunter is technically a criminal and he thinks this is wrong. Both are fight so hard to keep distance in their way but it’s a losing battle. They problem is, the people plotting about blowing up Pride have found Cal and Hunter and the house gets blown up. So it’s a question of will the bombers get to them before they solve the case or take their chemistry further.

Hunter cracks me up so bad in this book. I know some of his sass and snark are defense mechanisms, but man can he lay the smack down. That’s what has me going with these two. He goads Cal so bad. Sometimes he’s just teasing, other times it’s lust and other times he’s responding to Cal being a punk. But it makes for interesting reading lol. But it’s scary for them both too. Both are gay and have an investment in Pride. Not just that bit why blow up people for being different? It’s infuriating and scary and frustrating as they do all they can to stop this madness before too many get hurt.

Skye Kilaen
4.0 out of 5 stars One of the best hacker depictions I've read in romance, enjoyed this
Reviewed in the United States 🇺🇸 on November 25, 2019
Verified Purchase
Bad boy hacker anarchist brat in protective custody of by-the-book FBI agent? Yes please, although see content warnings below - some of these things bothered me more on a second read than they did way back when I read this the first time. YMMV and I still do enjoy the characters.

I really enjoyed this M/M age-gap romantic suspense, and not just because for once, a hacker is depicted writing a script and having to wait for it to run instead of just banging away at a keyboard in real time. (I'm married to a programmer, I notice these things.) I love a good bickering couple in romance, and these guys fit the bill perfectly. Our computer genius is Hunter, who uncovers a plot to bomb Seattle Pride. FBI agent Cal can't get backup on the case without more evidence, so he offers Hunter a deal: help dig for clues, and he can avoid jail on hacking charges. Opposites attract, sparks fly, and eventually they even manage to sort things out so they're not insulting each other all the time haha. Also the case gets solved, though not without some tense moments, destruction of property, and violence. Good times!

Content warnings, updated on second read: During the main characters' first meeting, Hunter attempts to shoulder past Cal to get out of Hunter's apartment, and Cal slams him into the door hard enough that he splits Hinter's lip. Cal slut-shames Hunter for taking PrEP, and Hunter rightfully calls him out, Cal does end up realizing he's being a jerk. Use of some ableist slurs: idiot, maniac, moron. Assertion that many homophobes are closeted queer people, and Cal manipulates an arrested right-wing terrorist into coming out while he's in custody. Attempted sexual assault by a third party which is handled very sensitively IMHO.
Read more
Helpful
Report abuse
See all reviews

Rowan
5.0 out of 5 stars So Amazing
Reviewed in the United Kingdom 🇬🇧 on April 9, 2018
Verified Purchase
This is my very first book my these authors, and such a good story. Cal is an FBI agent tasked to follow a lead about a group who intend to target the Pride parade. The info was sent by Hunter who is a hacker. When Cal turns up at Hunters door for more info the two, though totally opposite seem unable to stay apart. This book is definitely worth way more than the 5*’s allowed, do yourself the biggest favour ever and read it
Read more
Report abuse

Amazon Customer
5.0 out of 5 stars Five Stars
Reviewed in Canada 🇨🇦 on September 1, 2017
Verified Purchase
Really enjoyed this book and made me want to find other reads by this author.
Read more
Report abuse
See all reviews
Report an issue
Does this item contain inappropriate content?
Report
Do you believe that this item violates a copyright?
Report
Does this item contain quality or formatting issues?
Report