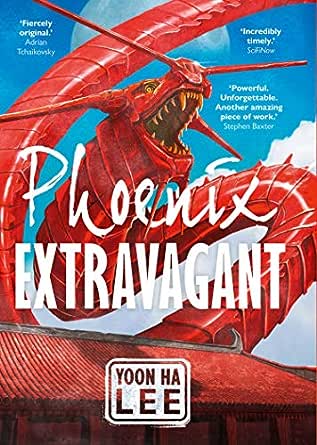 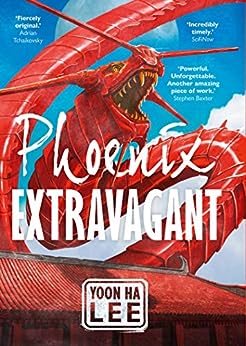 “An arresting tale of loyalty, identity, and the power of art... Lee’s masterful storytelling is sure to wow.” ― Publishers Weekly, starred review

"Phoenix Extravagant is a book containing ruminations on imperialism, the function and sanctity of art, acculturation, and the morality of love. It also contains a bloody big and unexpectedly adorable mechanical dragon." -- Jonathan L. Howard, author of the Johannes Cabal books

“Powerful. Unforgettable. This is another amazing piece of work, and I have the feeling I need to read it again to get it fully!” -- Stephen Baxter

“… a smart, thought-provoking book, and one which feels incredibly timely.” ― SciFiNow 4 star review

“A story of art, love, human connection, the power of creation, colonialism, and the roles we all have to play in fighting oppression." -- Paul Weimer

“Phoenix Extravagant marks a different way of looking at Empire and power and living within, under, and against that than Lee’s first novels, but no less a powerful one. A fantastic, brilliant undertaking.” -- Waterstones Bookseller’s Review

“A powerful, deeply moving book that is a wonderful read, without question one of the best of the year.” ― Every Book a Doorway

"The emphasis on art and painting gives the writing a poetic quality, added to by the elements of magic and mythology, which shows the depth of Lee’s research with a deft hand." ― The Nerd Daily

"An elegant, eloquent novel, tense and full of incident." ― Locus --This text refers to the hardcover edition.

Yoon Ha Lee's novel Ninefox Gambit came out from Solaris in 2016 and quickly garnered massive critical acclaim and was short-listed for the Arthur C. Clarke, Hugo and Nebula Awards. It won the Best First Novel Award in the Locus Awards and the Reddit Fantasy Award. His story collection Conservation of Shadows was released by Prime Books in 2013. He lives in Louisiana with his family and an extremely lazy cat, and has not yet been eaten by gators. --This text refers to the hardcover edition.

4.1 out of 5 stars
4.1 out of 5
96 global ratings
How are ratings calculated?
To calculate the overall star rating and percentage breakdown by star, we don’t use a simple average. Instead, our system considers things like how recent a review is and if the reviewer bought the item on Amazon. It also analyzes reviews to verify trustworthiness.
Top reviews

Beauty in RuinsTop Contributor: Fantasy Books
4.0 out of 5 stars A powerful #fantasy of art, identity, imperialism, and family
Reviewed in the United States on October 16, 2020
More than just a beautiful story of a nonbinary protagonist and their mechanical dragon, Phoenix Extravagant is a powerful tale of art, identity, imperialism, and family. Yoon Ha Lee deftly juxtaposes the beauty of words with the starkness of plot, the hard edges of her characters with the soft edges of her monster, creating a reading experience that’s as unique as the story being read.

Jebi is an artist and a sibling, inspired by the need to create, but increasingly driven by the need to share the financial burden of family. They resent the Razanei invaders and lament the loss of their people’s culture, but they’re no revolutionary. Even after getting trapped in a job with the Ministry of Armor, it’s not a sudden desire to overthrow the invaders that consumes them, but a horror at seeing the corruption and consumption of Hwagugin art to create weapons.

It takes a while before the mechanical dragon becomes a character, but Jebi and Arazi make an interesting pair. One has chosen nonbinary as a natural choice, and one has had nonbinary thrust upon them by artificial design. Neither wishes to play a role in games of war and rebellion, even though one was created as a weapon and the other groomed to enable such weapons. One is fighting to remain true to family, the other is longing to be part of a family. It’s a bold act of treason on Jebi’s part that allows Arazi to communicate, to express its thoughts, feelings, and desires, but it’s an even bolder act of treason from another person trapped between cultures and worlds that allows for the pivotal escape.

For a story that’s defined by empire, invasion, conquest, and rebellion, Phoenix Extravagant isn’t necessarily about any of them. It’s about people and cultures . . . about identity, choices, and love . . . explored against that backdrop of rebellion. Interestingly, it’s often hard to see good and evil here, despite the overthrow of a people and a consumption of a culture. There are a lot of moral grey areas, a lot of questions about intent, and whether the looming threat of Western invasion is genuine or just a political ploy, there’s no escaping the significance of that fear.

There’s a wonderful point where, in working so hard to free Arazi, Jebi realizes their own people will want to use it as a weapon against the Razanei – or perhaps against the West – and they cannot stop that, but at least they can ensure it has a choice. That moment sums up so much of the story, and in light of the rather surprising ending, the consequences of that choice weigh even more heavily upon the final pages.
Read more
One person found this helpful
Helpful
Report abuse

Lukasz
4.0 out of 5 stars Fun
Reviewed in the United States on November 1, 2020
Just look at his cover - magnificent, isn’t? Dragons are cool, but automatic dragons are something else.

Phoenix Extravagant, set in a fantasy version of Korea during the Japanese occupation, revolves around politics, war, and rebellion. Instead of showing the conflict through the eyes of devious politicians or fighters, it follows Gyen Jebi, a non-binary painter destined (or rather maneuvered) to shift the scales of the conflict. A delightful change from the smash and bang seen often in occupation narratives. Gyen wants to paint, and they care little about politics or war.

The Empire of Razan conquered Hwaguk and transformed it into Administrative Territory Fourteen. Gyen’s sister, Bongsunga, has revolutionary ties. She feels betrayed when her sibling registers for Razanei name, hoping it’ll allow them to secure a job. Jebi accepts an offer from the Razan government’s defense sector. His job involves reducing classic Hwagugin artworks to magical pigments necessary to program the behaviors of automata used to control the populace. A neat magical system. Without getting into details, Gyen ends up teaming up with a mecha dragon against the government.

The world, while inspired by history, is extravagant, atmospheric, and mysterious. The book tackles the theme of colonialism and various forms of response from colonized nations (resistance, acceptation, partial assimilation). As mentioned before, politics happen in the background but influence Jebi’s life to the point where they can’t remain impartial. The choices they face and erratic actions they make pulled me through the novel.

While they unravel the mysteries surrounding recent massacre, they grow involved with the lives of a sizable cast of characters, including Arazi - a sentient mecha dragon. Gyen’s actions are never thought-out. They react on impulse and often finish in even bigger troubles.

Lee does a fine job breathing life into each of the protagonists, imbuing them with hidden depths that slowly reveal over the course of the book. That said, Gyen’s relationship with Vei felt slightly forced. I didn’t feel any chemistry between them. In contrast, Gyen and Arazi banter made me regularly smile.

Even though I liked the book, it has a few downsides. First, it’s somewhat predictable. Second, the climax of the book moves at jet speed but it doesn’t resolve all conflicts, and I would expect a stronger closure from a book marketed as a standalone.

Despite its stumbles, Phoenix Extravagant was well worth the time spent reading it. It’s fun and entertaining. I wouldn’t mind seeing more entries in this well-crafted world. The open (sort of) ending gives hope Arazi will return. Fingers crossed.
Read more
One person found this helpful
Helpful
Report abuse
See all reviews