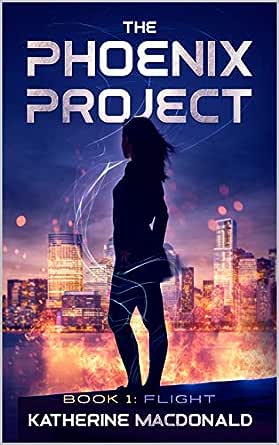 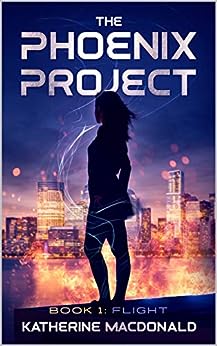 4.8 out of 5 stars
4.8 out of 5
10 customer ratings
How does Amazon calculate star ratings?
Amazon calculates a product’s star ratings based on a machine learned model instead of a raw data average. The model takes into account factors including the age of a rating, whether the ratings are from verified purchasers, and factors that establish reviewer trustworthiness.

Lola
5.0 out of 5 stars Oh wow, that ending oh my gosh
Reviewed in the United States on March 20, 2020
Verified Purchase
This. Was. AMAZING! Like a rollercoaster that you don't want to get off. This author has such talent. Action, scifi, romance, a tough heroine, witty banter, and a touch of existential dread. I was practically heartbroken for a character that's already dead before the story starts, and that takes skill
The characters are all diverse without it being thrown in your face.
The pacing was just right, now I usually always lean towards liking faster paced books but I thought this had the perfect balance of slow and fast.
It has the found family trope in it and it's done very well. I LOVE all these characters so much. Ashe is tough and bada** and the witty banter between her and Nick is just so funny. Mi's character is absolutely hilarious and I love his sarcasm. Ben is precious and Abi is interesting, I hope we get to see more of her. I also love that a lot of tropes that are seen with heroines are being turned on their head here. Ashe is by far stronger than her love interest, and she's not shy about her body for example. And her personality isn't dulled by meeting the love interest, nor is she suddenly weak. There's a lot more focus on the action and political drama than the romance, and I prefer that.
Now the ending. That ending, rarely do endings leave me wanting to scream and speechless at the same time. It IS a cliffhanger and while I love cliffhangers when handled well(this one was definitely perfect) I try to avoid books that have them unless the entire series is out because I get impatient. I have a feeling the sequel to this will be worth the wait and I already plan to buy it as soon as it's out.
Now, there is some typos throughout and the formatting was a little off in places. It probably could've used a proofreader or a second one if there was one, but definitely don't let those turn you off from checking this out as the story is amazing and more than makes up for it.
I'm looking forward to book two now!
Read more
Helpful
Comment Report abuse

Taliesin Govannon
5.0 out of 5 stars A stunning story-telling achievement of the highest order!
Reviewed in the United States on April 6, 2020
Verified Purchase
I read a lot of books, the vast majority of which I enjoy. Every once and awhile, though, a book comes along that goes beyond mere enjoyment. A book that transports you into another world, and one that leaves you thirsting for more.

This is one of those books. "The Phoenix Project Book 1: Flight" is the story of Ashe a genetically engineered superhuman who spends her days trying to take care of her adopted brothers and sister after they escaped from the lab that created them. they eventually run across the Phoenix project, a group of resistance fighters trying to stand against a murderous authoritarian government.

The story may have familiar elements, but author Katherine McDonald combines them with realistic dialogue and fleshed out, fully realized characters to create a truly unique reading experience. About halfway through the novel, I started getting a growing realization that this was one world that I would gladly lose myself in novel after novel.

I told my wife that this story was like The Hunger Games meets X-Men, but that description doesn't do it justice. It is a unique world all of its own.

I am legitimately blown away. "The Phoenix Project: Book 1: Flight" is a stunning story-telling achievement of the highest order!
Read more
Helpful
Comment Report abuse

Leah
4.0 out of 5 stars An enjoyable read!
Reviewed in the United States on July 7, 2020
Verified Purchase
I initially chose this book because the blurb reminded me of books I’ve really enjoyed in the past, including the Shatter Me series and the Project E.L.E. series. The idea of a “super” teen is very appealing, especially one designed for nefarious purposes who rebels against her makers.
The book is set in first person so it’s a fairly simple matter of slipping into the mind of the main character, Ashe. Made in a lab and trained to be an unfeeling killing machine, she revolts and her ‘family’ escapes into the slums of a city known as Luca. Now Ashe might inexperienced with life, but she is a certified badass chimera and responsible for three other lives so she does her best to care for her own in a place where people are starving.
The initial “us against the world” vibe is altered when the MC does a terrible deed against those who don’t deserve to suffer and guilt sets in. Once the guilt exists, the rest unfolds. She joins the Phoenix Project, those she wronged, to fight for what is right. Soon it’s a family affair, and, of course, there are a couple boys. The good looking Nick is also part of the Phoenix Project, and he’s got his own grudge against the establishment, while Gabe, her childhood love haunts her every day.
It doesn’t take long for everything to go wrong and for Ashe to face a terrible choice: to allow her family to risk themselves to save their new friends, or run and hide, a chance for Ashe and her family to live another day.
Of course, no good story would be complete without the main antagonist, the Institute, the very place where Ashe was created and fled with her family into hiding. Once she joins the Phoenix Project, she comes face to face with her oldest nemesis, Adam. Not only is does he seem void of emotions, he is eager to recapture Eve and bring her back to the Institute.
The story continues on with action and suspense. There are flares of romance and passion. Soon she has to return to the place that created her to fight the destiny in order to make the choices she believes in. The conclusion, as part of a trilogy, leaves a cliffhanger, but good news, the rest of the The Phoenix Project Trilogy is available now.
While there are a few punctuation and sentence flow issues another editing pass would easily fix, overall I found the story to be well-written and a quick, fun adventure. Although there were a few emotional scenes, this book is fast-paced, and I am sure anyone who picks up The Phoenix Project: Book 1: Flight will enjoy the time they spend in Katherine Macdonald’s world.
Read more