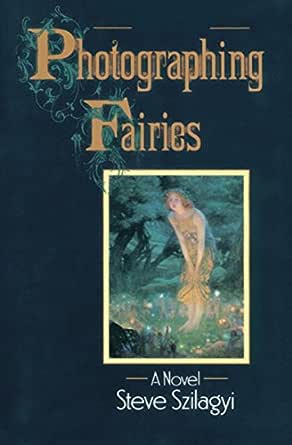 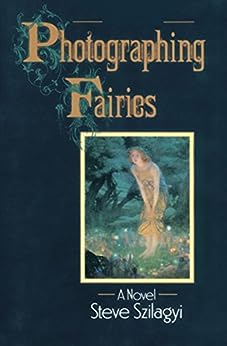 This rather bizarre first novel is an engaging mixture of fact and fiction. Hoping to win a reward offered by Sir Arthur Conan Doyle, hapless photographer Charles Castle tries to prove that some apparently genuine photographs of fairies are actually brilliant frauds. Soon, however, Castle wants to prove the opposite; he is desperate to locate and photograph on his own the fairies he thinks populate an English garden. This quest leads him into a series of mishaps involving gypsies, murderers, and a whole cast of truly unique characters. Readers will feel compelled to finish this book to see what happens to all the strange characters Castle encounters on his venture. Recommended for general readers with a taste for slightly offbeat stories.
-Patricia C. Heaney, Nassau Community Coll., Garden City, N.Y.
Copyright 1992 Reed Business Information, Inc. --This text refers to an out of print or unavailable edition of this title.

Do you believe in fairies? American 1920's photographer Charles Castle doesn't--until a tantalizing photograph that just might show several fairies sends him packing off from his London studio to a Burkinwell inn, the Starry Night, on a quest to prove their existence. At first the photograph, the property of hard-headed constable Michael Walsmear, doesn't impress Castle; but a second look sends him off to eagerly credulous Sir Arthur Conan Doyle, who commissions him to buy the negatives before they can compete with Doyle's highly prized (and obviously bogus) photos of fairies. Even before he arrives in Burkinwell, Castle is set upon by Paolo and Shorty--a pair of thieves clearly destined to turn up later, confirming first-novelist Szilagyi's unashamed use of melodrama and coincidence to fuel his rickety plot--and rescued by pert Linda Drain, whose husband, Rev. Thomas Drain, enjoys solitary midnight orgies in a grove where ten- inch fairies (yes, fairies) trip over his naked body. Inquiries of Esmirelda, the Rubensesque servant at the Starry Night, reveal that it was the same fairies who drove Bea Templeton to panic and run in front of Walsmear's car, leaving behind her enraged husband Brian, who doesn't believe in fairies, and her innocent daughters Anna and Clara, who play with them every night as Castle struggles to get the troupe on film. A portentous frame-tale--Castle's awaiting execution for an unspecified crime--promises that things will turn out more grim than Grimm. The farrago of Twenties setting, Victorian plotting, folkloric conventions, and postmodern twitting of same makes this a curiosity most likely to appeal to readers willing to suspend several sorts of disbelief at once. -- Copyright ©1992, Kirkus Associates, LP. All rights reserved. --This text refers to an out of print or unavailable edition of this title.

In this offbeat first novel, set in England during the 1920s, a photographer tells a mesmerizing tale about how he was enlisted by Sir Arthur Conan Doyle in his crusade to make the world believe in fairies.
Copyright 1993 Reed Business Information, Inc. --This text refers to an out of print or unavailable edition of this title.

s in the 1920s, when a blustering country policeman, Constable Michael Walsmear, literally punches his way into American photographer Charles Castle's London studio. Walsmear has what he claims are photographs of fairies. Sir Arthur Conan Doyle, whom Castle approaches to verify the pictures, offers a large sum of money to have Walsmear's photographs destroyed. But even more than cash, Castle wants the truth. His quest takes him to Burkinwell, a seemingly peaceful country village seething with secrets. Armed with a camera, he encounters gypsies and wild dogs, the innocent girls of the photos and the murderous thieves who threaten them, a beautiful garden and unspeakable sexual practices. He also discovers the most shocking truth of all: that absolute purity and utter depravity are folded together in the human heart.<br>"A remarkable novel . . . full of charm and enchantment." -- Los Angeles Times<br>"Mesmerizing and offbeat, PHOTOGRAPHING FAIRIES is an irresistible treat . . . . Th --This text refers to an out of print or unavailable edition of this title.

Ohio-born Steve Szilagyi (pronounced Sil-ah-jee) graduated with honors from Columbia University, winning the Columbia Bennett Cerf Award for Fiction for his unpublished story collection The Night Sophia Loren's Dress Caught Fire in a Restaurant. A painter and illustrator, Szilagyi has published drawings in New York magazine and other national publications. Photographing Fairies was his first novel.

4.0 out of 5 stars
4 out of 5
25 global ratings
How are ratings calculated?
To calculate the overall star rating and percentage breakdown by star, we don’t use a simple average. Instead, our system considers things like how recent a review is and if the reviewer bought the item on Amazon. It also analyzes reviews to verify trustworthiness.

AvalonianDragonGirl
5.0 out of 5 stars Interesting story inspired by the Cottingley Fairy Incident.
Reviewed in the United States on May 13, 2018
Verified Purchase
It was a great read. I highly enjoy stories like this one, where only a few of the characters are aware of something supernatural in an otherwise ordinary world. I had seen the movie on the Syfy channel several years ago, and just had never gotten around to reading the book until now. I especially liked that the movie differs somewhat from the book, especially since I saw the movie first, when I prefer reading the book before seeing the movie.
Read more
4 people found this helpful
Helpful
Report abuse

Hamoncan
3.0 out of 5 stars Good, yet tedious
Reviewed in the United States on October 29, 2019
Verified Purchase
First 70% of the book is very tedious. I kept watching the counter. It does finish strong, although kind of weird. Not at all what I expected. I find it hard to read books with unpleasant main characters.
Read more
2 people found this helpful
Helpful
Report abuse

Neal W
5.0 out of 5 stars A Fascinating read
Reviewed in the United States on March 22, 2014
Verified Purchase
If you liked the NetFlix version of Photographing Fairies you will be mesmerized by the novel. An excellent story. A page-turner. You will never take another walk in the woods without recalling this story.
Read more
5 people found this helpful
Helpful
Report abuse

C. Williamson
2.0 out of 5 stars Two Stars
Reviewed in the United States on April 6, 2015
Verified Purchase
Not the best I have read. It could have been so much more.
Read more
3 people found this helpful
Helpful
Report abuse

N. Moore
2.0 out of 5 stars No magic here
Reviewed in the United States on February 20, 2018
Verified Purchase
I did not quite see the point of this book. Did not finish it.
Read more
2 people found this helpful
Helpful
Report abuse

kellytwo
5.0 out of 5 stars A quirky delight
Reviewed in the United States on April 18, 2008
Offbeat, quirky--to be sure. This engaging story, set in the early 1920s is great fun to read, due to the slightly off-kilter main character, Charles Castle. He's naïve to the point of painfulness, and prone to go charging off in new directions without the assistance of a reliable map. A photographer by trade--and a not-so-good one at that--he is thrown off balance when his London studio is invaded by a small-town constable, Michael Walsmear. Walsmear has photographs that he wants to be validated. Problem is, they're not very good photos, and the subject is entirely improbable.

But, to prove that many times we see what we want to see, Castle--after a bit of tweaking--does see the `fairies' captured on film by Walsmear. Castle then rushes off to see Sir Arthur Conan Doyle (the creator of the marvelous Sherlock Holmes mystery novels) who has a bit of a reputation in this field. In fact, Sir Arthur has his own photographs of fairies, for which he is seeking validation.

From there, the tale gets `mysteriouser and mysteriouser' until all the loose ends are satisfactorily tied together. Along the way, while journeying to the small rural village of Burkinwell, Castle is robbed on the train by two very strange characters, Paolo and Shorty, who may or may not be members of the gypsie troupe, with caravans parked just outside the town limits. There's also Esmirelda, the maid-of-all-work at the Starry Night (the local hostelry); the beautiful Linda Drain, wife of Tom, the local minister, who has his own difficulties with which to contend; the Templetons--father Brian, and daughters Anna and Clara--whose garden houses the fairies, and . . .

Some books can be easily capsulized; others stubbornly resist. This is one of the latter. It's beautifully written with a wry sense of humor and inquisitiveness not often seen anymore. The setting seems to me to be completely accurate for the time and place, and it is populated by a most unusual and enigmatic assortment of characters. It's an absolutely delicious read!
Read more
15 people found this helpful
Helpful
Report abuse
See all reviews

Lyn, Middleton
3.0 out of 5 stars OK if you believe in fairies
Reviewed in the United Kingdom on August 24, 2020
Verified Purchase
I read this book as it was on my book group list. Not for me, very far fetched. It also surprisingly contained some violence and sex scenes. Very expensive too at over £7.
Read more
Report abuse
See all reviews