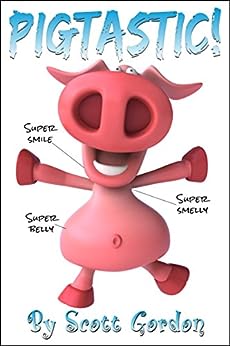 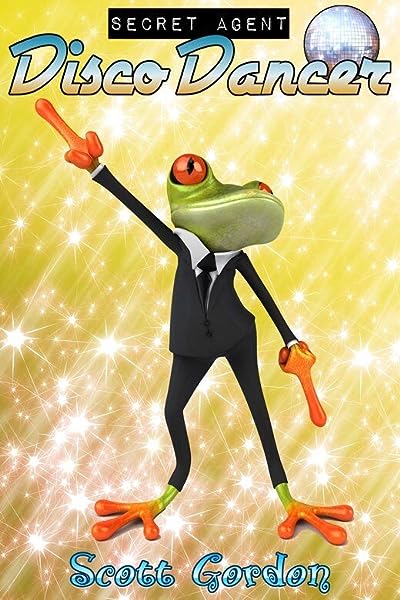 Pigtastic (Accept people for who they are!) Kindle Edition

4.1 out of 5 stars
4.1 out of 5
88 global ratings
How are ratings calculated?
To calculate the overall star rating and percentage breakdown by star, we don’t use a simple average. Instead, our system considers things like how recent a review is and if the reviewer bought the item on Amazon. It also analyzes reviews to verify trustworthiness.
Top reviews

Amazon Customer
5.0 out of 5 stars Pig Out!
Reviewed in the United States on April 6, 2015
Verified Purchase
This is the complete review as it appears (http://ianwoodnovellum.blogspot.com/2015/04/pigtastic-by-scott-gordon.html) at my blog dedicated to reading, writing (no 'rithmatic!), movies, & TV</a>

Scott Gordon is a children's author who is well known for porking his nose into other people's funny business, so it's hardly surprising he's come out with this story of a friendly pig in a poking-fun kind of story - and right now 9as of this posting) it's free on Amazon in ebook form.

Pigs are actually adorable as piglets. They're hilarious and play like puppies. Pigs are smart animals, too - very similar in intelligence to dogs, but they're nowhere near as domesticated, so I wouldn't recommend one as a pet, even though, when given a chance, there are quite clean animals, too. I might make an exception for the one featured here, who looks like a pig who'd be fun to hang with.

The moral here is not to judge by appearances. Although our friend looks like he might be a bit odd, and his nose is rather peculiar by our standards, that's no reason to turn your own nose up at the little guy. I think he (or maybe she!) is probably very su-wee-t.

How can you not like someone with lots of energy, and who is also into exercise and fun? As you skate through life hoping not to become board (or is it bored?) you might want to consider the serious advice and take a page or two out of the play-book offered here. It's not sty-in-the-sky, you know!

Scott Gordon once again brings craziness and 3-D effect art to his pages in a simple, but bright and colorful story of fun, friendship and taking people for who they are. I think that's a good pork-trait to paint. Or is it a pig-ture?
Read more
Helpful
Report abuse

Roger P. Royer
4.0 out of 5 stars Funtastic
Reviewed in the United States on March 10, 2018
Verified Purchase
Yet another fun book by Scott Gordon for kids. Spectacular digital art and fun for kids learning with a special pink pig.

Now there are ads after the main book but you don't have to read them. I did. I found the books for kids in different languages interesting and fun to look at just not for me. I can see how they are useful.

Blackrosephantom
5.0 out of 5 stars Working out your mind, body, and life.
Reviewed in the United States on December 28, 2015
Verified Purchase
This book is awesome! The author loves his son so much. You can just tell through every page, in every book. I can relate to the working out part, lol. I struggle with accepting some people. This book is right to teach parents and kids to learn and try to accept different kinds of people. Donald trump and his racist fans should read this, and other books, and stop fearing and hurting non-white people.
Read more
Helpful
Report abuse

Miranda
1.0 out of 5 stars Too drawn out
Reviewed in the United States on April 8, 2015
Verified Purchase
There was little writing per page as though the target audience is just learning to read, but some of the words are much too large if that's the case. The pig is cute at first but interest is quickly lost because you see it so much.
Nice message but overly drawn out and not interesting enough.
Read more
Helpful
Report abuse

Kindle Customer
5.0 out of 5 stars Are You Pigtastic?
Reviewed in the United States on May 31, 2015
Verified Purchase
I like this book very much. It gives a message all children need to learn - acceptance of other people for who they are. This is a great book to help remind children that everyone is not the same, and if they were, the world would be a boring place. The story reminds me of people I have let into my life and the wonderful things I would have missed had they not been there!
Read more
Helpful
Report abuse

Jbarr5Top Contributor: Baking
TOP 1000 REVIEWER
4.0 out of 5 stars Pigtastic
Reviewed in the United States on April 23, 2015
Verified Purchase
Pigtastic (Accept people for who they are!)
Other works by the author are highlighted at the beginning. This is about a pig that understands there are a lot of
things he has no control over and to do the best you can with what you have. Lots of links for other author's works that are free certain days.
Read more
Helpful
Report abuse

Cinisajoy
5.0 out of 5 stars Great read.
Reviewed in the United States on April 6, 2015
Verified Purchase
I highly recommend that all children read this book. It is about acceptance of yourself and others. Plus the pig is really cute.
Read more
One person found this helpful
Helpful
Report abuse
See all reviews

K. J. Kelly
2.0 out of 5 stars Confusing and disappointing short picture book, ostensibly about accepting others for who they are
Reviewed in the United Kingdom on April 8, 2015
Verified Purchase
I really don't think this book what achieves what it sets out to do.
The blurb states it's about accepting others as they are - worthy, and worth a download I thought. But it doesn't make a lot of sense.

The Pig talks more about the fun things we can do with him (go to Ireland?! Skateboard etc) and the "seeing past exterior" angle comes in at the last moment almost as an afterthought. And the book never explains why anyone would have a problem with Pig anyway (poor? Works out but is still fat? Not at all clear).

There are no other characters either, so it's confusing WHO doesn't like/accept the Pig.

My son liked the pictures - cool dude sunglasses, surfboards. But the point wasn't at all clear, the terms used (exterior) inappropriate. Pictures are fine for a computer-style graphic, but most of the book (more than 50%) was taken up by ads for other 'on offer' Kindle picture books.

Can't say I'd recommend this, unfortunately, but it would be most suitable for 5-8 year olds.
Read more
One person found this helpful
Report abuse

M. Dowden
5.0 out of 5 stars For Everyone
Reviewed in the United Kingdom on January 7, 2012
Verified Purchase
I should point out that this is only a short story, indeed it only accounts for half of the download, the other part is made up of ads for other books, and a picture of a little girl, Alyssa Mowetzy, and a get well message.

Anyway, to the actual story. If you have downloaded this to a colour device, then you will see that this is in colour, however the pictures are perfectly okay on the black and white screen of a kindle. Illustrated throughout by the pig on the cover, this is a short message really of accepting people for who they are, something that we all need to remember from time to time. Little children should love this, but as an adult myself, I must admit that I loved this as well.
Read more
2 people found this helpful
Report abuse

Sarah
4.0 out of 5 stars A hit with my 4-year-old!
Reviewed in the United Kingdom on April 16, 2015
Verified Purchase
Downloaded for free from Amazon.co.uk

I wasn't really expecting much from this book, but for some reason my 4-year-old has asked for this story every night for a week! There's not much to it - a pig who works out but is still himself, and has a heart of gold and treats people nicely. This has been a big hit with my little boy though :)
8 out of 10
Read more
Report abuse

Kindle Customer
1.0 out of 5 stars No story
Reviewed in the United Kingdom on April 6, 2015
Verified Purchase
There was no story with this book . Just details of other books from this author
Disappointed didn't even give that much details about the books
Read more
One person found this helpful
Report abuse

N evans
4.0 out of 5 stars I <3 this book.
Reviewed in the United Kingdom on April 20, 2017
Verified Purchase
This book is ... is ... I don't know how to describe it but I think it was a great book and I highly recommend it as it has a message to accept people for who they are, even if they seem strange.
Read more
Report abuse
See all reviews