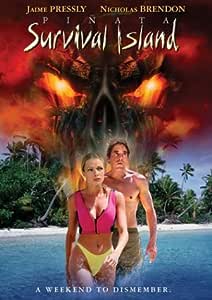 A group of college fraternity and sorority kids show up for an island adventure, the annual Cinco de Mayo treasure hunt. The testosterone runs high and the scheming is down and dirty to collect the most underwear before crossing the finish line. The fun and games soon turn into a contest of survival when two of the co-eds smash an ancient piñata, reviving the demon spirits within. Suddenly the drunken and sexy exploits become hide-from-the-creep. Only something this evil could tear such good friends apart!

4.2 out of 5 stars
4.2 out of 5
63 global ratings
How are ratings calculated?
To calculate the overall star rating and percentage breakdown by star, we don’t use a simple average. Instead, our system considers things like how recent a review is and if the reviewer bought the item on Amazon. It also analyzes reviews to verify trustworthiness.
Top reviews

Einsatz
TOP 1000 REVIEWER
3.0 out of 5 stars "Hit it with a stick!"
Reviewed in the United States on July 17, 2014
Verified Purchase
"Many moons ago.............." some idiot came up with the idea of a killer piñata and thought to make a movie of it. They shoved some poor guy into a rubber suit and shot what could easily be termed just another slasher flick involving some miscreant pottery (a bunch of dimwitted kids stranded on an island, a killer on the loose, they get picked off one by one...). Very little of this is original or unexpected. There's an extensive back-story dealing with the genesis of this killer piñata. It's served up quite seriously until they get to Cinco de Mayo 2001 and the entrance of the dopey kids on their way to a university sanctioned scavenger hunt. A bare butt is flashed, swearing ensues, they handcuff the kids together in teams of two then send them into a jungle to collect underwear (and get killed). It must have been a very liberal university.

While watching this hodgepodge of lunacy I did form a begrudging fondness for it, enough so that I feel the need to keep it to watch again someday. (It's barely adequate as a horror flick, but I like it anyway.)

Grindhouse and Horror
3.0 out of 5 stars Maybe if you like SYFY channel creature films
Reviewed in the United States on June 12, 2012
Verified Purchase
This film might appeal to people who watch a lot of those CGI creature films on the SYFY channel. It has some good gore scenes, but a film like this would've been better if it was gorier; it's only gory in some parts. It also would've been better if they threw in some nudity but there's none. It's a silly film about a giant monster pinata that kills off a group of people on an Island that are playing some underwear hunting game. It's from the same director as TRANSYLMANIA, so that might give you an idea of what you're buying. It's pretty bad but I thought it was kind of fun at times. The directing is mediocre, and it has no effective atmosphere or suspense. The place where they filmed the movie is OK, but it doesn't film its locations that well. The characters are also uninteresting in this film that sometimes gets tedious in between the gore and violence. Despite some effective and violent gore scenes, the film isn't depressing. It's easy to follow and might be of interest to people who like to watch lots of those SYFY channel monster movies. It has its moments, but I thought it got a little boring in parts.

The quality is really good. There's a good extra that shows how they made the creature. The monster was played by a midget in a monster suit at first, but then the creature was changed and enhanced with CGI.
Read more
Helpful
Report abuse

Robert I. HedgesTop Contributor: Pets
HALL OF FAMETOP 1000 REVIEWER
1.0 out of 5 stars A Movie Proving That Ancient Piñatas And Panty Raiding Do Not Mix
Reviewed in the United States on October 30, 2006
Verified Purchase
I can't even believe I watched this movie. This is worse than awful, even for people who enjoy ultra-cheesy B-movies. The film begins with ludicrous narrative pontification on an ancient tribe in South America which was beset with a plague due to their sins; eventually a shaman put a pig heart in a pinata and in an elaborate ceremony set it loose. The narrator explains that all would be well as long as the "magically charged clay" was not disturbed.

After a jump cut to May 5, 2001 (Cinco de Mayo) we find a group of semi-attractive non-actors on an island. This is a college outing, but surprisingly features little skin, perhaps proving that ancient Aztec gods and bikinis don't mix. At any rate the group is broken into couples who are handcuffed together and are sent on what amounts to a scavenger hunt on the island for pre-positioned underwear. As if this could get any stupider, one couple immediately locates the demonic pinata, and, logically, breaks it open with a rock.

The demon turns out to look like a half pig-half terrifying devil monkey creature if it was rendered by a sock puppet. It is the worst single piece of CGI animation I have ever seen in my life, and if this doesn't make you involuntarily roll your eyes, you are not paying attention. The CGI devil pig thing sees with some kind of infrared vision that not only rips off "Predator" directly, but also reminded me of "Land of the Lost" when Enik was in the pyramid. Throughout the film there are bad and pointless flashbacks to earlier scenes, some of which are mere seconds old (in case you forgot), and the whole thing comes to a mystifying conclusion that is a cross between the end of "Ghostbusters" and a weaker episode of "Mod Squad."

In all truth, I can't think of a single good thing to say about this film, so I think I will conclude by strongly advising anyone against watching this movie for any reason. It is not scary, it is not funny, it is not campy, and it is not worth your time. It would, however, make an excellent Christmas gift for a bad movie aficionado who truly believes that they can watch and find some type of perverse joy in any film, no matter how poorly crafted. I bet they can't.
Read more
4 people found this helpful
Helpful
Report abuse

gG
1.0 out of 5 stars Pinata: Survival Island - one of the best bad movies!
Reviewed in the United States on February 23, 2009
Verified Purchase
This is really a terrible movie, but my son and his friends enjoy watching awful sci-fi movies, so I got it for them. I think it's hilariously horrible, and would recommend it to anyone who wants to laugh out loud!

How many movies can they make about college kids on an island, being chased and mutilated by monsters and goblins?! PLEASE be sure that you get separated from the group, so that the monster can single you out and kill you!

Haven't we all seen enough of these that we might actually believe the girl who has the initial encounter when she comes back totally terrified and tells us what happened? At least check it out!! THEN GET THE HECK OFF THE ISLAND AS QUICKLY AS POSSIBLE!!!
Read more
Helpful
Report abuse
See all reviews

Susan
5.0 out of 5 stars Funny
Reviewed in the United Kingdom on September 10, 2019
Verified Purchase
Saw this movie advertised online years ago but could never seem to find it. Really quite funny, wouldn’t really say it’s a horror more a comedy horror I would have liked a sequel to this one actually as it was really lighthearted and good. Acting isn’t bad lots of people you would recognise from 90s shows and such
Read more
Report abuse