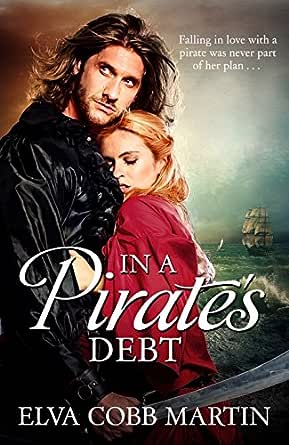 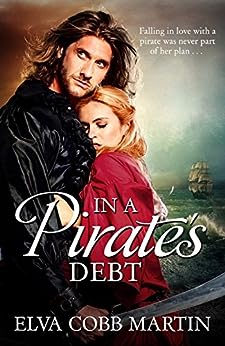 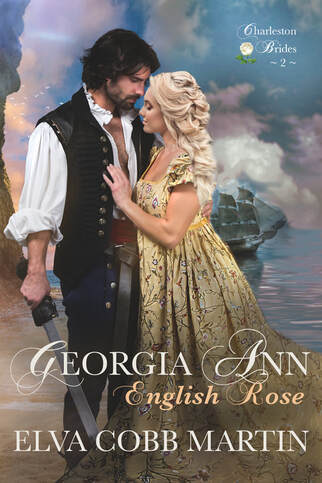 In a Pirate's Debt - Falling in love with a pirate was never part of her plan ... Kindle Edition

Elva Cobb Martin's passion is to write adventurous, romantic novels that not only entertain, but celebrate the moral truths found in classic fiction. Truths like honor and respect, fidelity and reverence. She lives in the South Carolina upstate with her husband and a mini-dachshund. For more information visit her web site at: elvamartin.com. --This text refers to the paperback edition.

4.4 out of 5 stars
4.4 out of 5
66 customer ratings
How does Amazon calculate star ratings?
Amazon calculates a product’s star ratings based on a machine learned model instead of a raw data average. The model takes into account factors including the age of a rating, whether the ratings are from verified purchasers, and factors that establish reviewer trustworthiness.
Top Reviews

Samantha Hite
4.0 out of 5 stars A good story!
Reviewed in the United States on June 30, 2017
Verified Purchase
I like the story although there are a couple parts that require some heroic levels of suspension of disbelief. I'm not saying it's terrible & it comes with the territory of pirate novels (I've read more than a few). I'm an avid reader of clean fiction and usually that involves Christian fiction. It's seems ms. Martin has fallen into the same trap Marylu Tyndall has in trying to redeem everyone. I just don't think that's realistic because evil isn't vanquished that easily. One more minor issue: please don't name two characters similar names! There's a John Hawkins & a James Hawkins & I had to flip back and forth to figure out which man was which. They're not relations in the story; so there isn't a "oh that's the older brother" or something to differentiate them.

I know that sounds negative, but overall it was good & I really liked Travay. I'll be recommending this book to my friends & I'll likely pick up future books from this author.

As a side note I heard about this book from Marylu Tyndall's blog. Is it just me or is this book a combination of her books The Redemption & The Red Siren? I'm not going to detail the plot points because it would be a major spoiler, but it's a thought...

Jennifer Berry
4.0 out of 5 stars An author with potential to be even better!
Reviewed in the United States on March 27, 2018
Verified Purchase
I liked In a Pirate’s Debt. The cover and description pulled me in, but I don’t think the cover models totally reflected the characters’ physical descriptions in the book. After reading, I also can’t stop thinking of things that could have made it even better for me. The story starts out with an attention grabbing moment by the heroine that I loved. I expected her to be feistier than she was for the rest of the story. I think more character development would have helped. At least one flashback of moments from childhood where we could see how the characters developed affection for each other. This could help me see why the hero cared since the heroine’s behavior sometimes came off as spoiled or uncaring. Many things are stated that I think the characters could have shown more convincingly with their actions. I loved how the hero saved his girl in the end. However his character was driven to find his mother throughout the story. So much so that I just knew this would be resolved by the end. Maybe this won’t be that important to other readers, but it was a bit of a let down for me. Although the rescue would undoubtedly have increased the book or distracted perhaps from the romantic thread. I found the other characters like Sinbad very interesting and liked the bit of background and transformation for him. I also liked the wisdom and actions shown by Mama Penn. I liked Travay but wanted more insight on her motivations. I also especially liked everything about Captain Bloodstone.
Read more
4 people found this helpful
Helpful
Comment Report abuse

MAC
3.0 out of 5 stars Not a shred of common sense in any of the main characters!
Reviewed in the United States on September 19, 2019
Verified Purchase
What you might like about this book:
1) A LOT of damsel in distress rescues! (I personally love heroic rescues and for any book to have a good rating I require one good rescue. This one had so many, I lost count.)
2) One amazing discription scene of a storm. It reminded me of the movie The Perfect Storm.
3) The plot had potential. It atleast was interesting enough that despite some of the things I absolutely hated about the book, I finished reading it, just to know the end.
4) It's a clean read. Yes people, no sex! It defies reason why some authors think that sex scenes are needed to write a good romance.

What I absolutely HATED about this book:

1) It was super preachy. Which wouldn't be a bad thing if it were true but the way god is described by the "christian" characters in the story is so wrong it's nearly blasphemous. Just think for a minute, what kind of god plays games with people's lives? And thankfully the main characters had a HEA but then what does that say about countless others that don't get a HEA in this life? They weren't good enough? God doesn't really care? I mean, it doesn't work. I hate it when they potray god as a cruel, petty child that purposely manipulates certain outcomes. Look I'm all for inspirational stories that throw out an occasional positive idea. Mostly because I know said books will be PG. Well enough, I don't want to offend but really there came a point where I would skim those portions because they literally were making me flinch.

2) There wasn't a hair split in two of common sense in any of the main characters and their personalities were completely underdeveloped. Lucan the H was an uncommunicative martyr who for no good reason has always loved the most self-absorbed self-righteous, wishy-washy, self-serving, egotistic, vain, dim-witted brat of a heroine I've ever seen penned on paper. But I suppose as long as you have gorgeous auburn hair and sky blue eyes it makes perfect sense! He was a dashing hero to be sure but I lost all respect for him by the middle of the book. To be honest, I was more interested in his friend Thorpe. Which hint hint it might have been nice to have developed his character more as an added side plot in the story so we wouldn't have been obligated to tolerate the 2 main ones throughout the whole book. I would have liked to have know more about Sinbad too. Was terribly curious about his story but the author never addressed it.

3) Travay Travay,...well she was everything I just mentioned about her multiplied by 3. She was such a snooty, mean spirited brat that I wasn't really invested in her escaping the clutches of Mr. Poole. To be honest, by the end of the book, she sort of would have deserved being married to someone like that...Well, no, I'll take that back, but I don't think she deserved Lucas either. Besides u can tell their marriage is headed for disaster considering neither one really knows how to spare the 5 mins it takes to "communicate" all the facts in order to avoid misunderstandings!

4) So many loose ends! So Lucas was saved but what happened to Thorpe and Sinbad and D-something? It's sort of hinted that they were there at the end but no clarification was made as to whether they were pardoned. Lucas' mother hasn't been rescued and with all the disasters our heroes kept encountering at sea, I have very low expectations they'll survive any future missions. What of Aunt Merle? Did she go back home? Is she back to selling her herbs? Personally, I thought her and Thorpe would have been good together if she were younger than potrayed and he was actually older than Lucas.

5) No common sense! I'm not going to go into detail on this one cause it's irritating. But my biggest pet peave is lack of planning. And the characters in this book Never planned their actions! They always just reacted to their situations. No wonder they kept falling into one scrape after another! Just plain DUMB!

So there it is. If you're starved for heroic rescues and swashbuckling drama. Go ahead read the book. It won't kill you. But if you have a real issue with any of the cons I mentioned you may want to avoid it.

All statements are a matter of personal opinion if anyone doesn't agree that's fine too. This was just my take on the book. If the author's intent was to potray her characters as I described them then she's one of the best authors I've read because she did a smashing job of it!
Read more
3 people found this helpful
Helpful
Comment Report abuse

Kindle Customer
5.0 out of 5 stars Well-written historical action and romance novel
Reviewed in the United States on August 20, 2019
Verified Purchase
Finally, a well-written unique and intriguing historical (1720s) action and romance novel involving piracy and adventure on the high seas. Always appreciate a novel whereby I actually learn something with unpredictability involved. Without reiterating the entire plot, childhood friends unexpectedly meet when Luke rescues Travay when escaping a forced marriage. Several more times Luke comes to her rescue until she must marry a hated enemy to save his life. Despite being a Christian novel, verses and lessons are integrated, although not overwhelming the reader with preaching but more actions instead. This novel kept my attention from beginning-to-end and is highly recommended for readers who enjoy this genre.
Read more
One person found this helpful
Helpful
Comment Report abuse
See all reviews from the United States

Helen Cox
5.0 out of 5 stars Fun, action-packed and full of romance. Pure escapism.
Reviewed in the United Kingdom on May 20, 2018
Verified Purchase
The central pirate Lucas Bloodstone is truly a creature of beauty. Like most pirate romances you need to be willing to suspend your disbelief to pretty outrageous levels, but who cares? This book is fun, action-packed and full of romance. Pure escapism.
Read more
Helpful
Sending feedback...
Thank you for your feedback.
Sorry, we failed to record your vote. Please try again
Report abuse