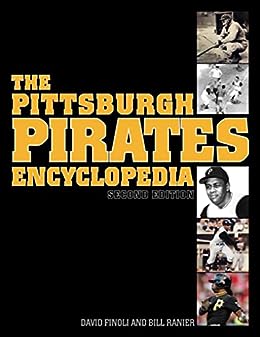 by David Finoli (Author), Bill Ranier (Author) Format: Kindle Edition
See all formats and editions
Sorry, there was a problem loading this page. Try again.
A comprehensive guide to Bucs history with player bios, stats, photos, and much more.

The Pittsburgh Pirates Encyclopedia captures the remarkable history of the Major League Baseball franchise through the stories of the individuals and the collective teams that have thrilled the Steel City for 125 years. The book breaks down the team with a year-by-year synopsis of the club, biographies of over 180 of the most memorable Pirates through the ages, and a look at each manager, owner, general manager and announcer that has served the club proudly. Now updated through the 2014 season, The Pittsburgh Pirates Encyclopedia will provide fans a complete look into the team's history, sparking memories of glories past and hopes for the future. Highlights include:

Packed with photos and stats, this is one of the most comprehensive books ever written about the Pirates, and a resource that no Bucs fan should be without.
Read more
Previous page
Next page
Due to its large file size, this book may take longer to download

David Finoli is a sportswriter from Monroeville, Pennsylvania, where he lives with his wife and three children. The Duquesne University graduate has penned six other books, including The Pittsburgh Pirates and The Birthplace of Professional Football: Southwestern Pennsylvania. Finoli has also contributed to Pittsburgh Magazine, and the Pirate Gameday Program.
Bill Ranier is the co-author, with David Finoli, of When the Bucs Won It All: The 1979 World Champion Pittsburgh Pirates. --This text refers to an alternate kindle_edition edition.

David Finoli is a sportswriter from Monroeville, Pennsylvania, where he lives with his wife and three children. The Duquesne University graduate has penned six other books, including The Pittsburgh Pirates and The Birthplace of Professional Football: Southwestern Pennsylvania. Finoli has also contributed to Pittsburgh Magazine, and the Pirate Gameday Program.
Bill Ranier is the co-author, with David Finoli, of When the Bucs Won It All: The 1979 World Champion Pittsburgh Pirates. --This text refers to an alternate kindle_edition edition.

Navy Fan
5.0 out of 5 stars Huge Pirate Fan
Reviewed in the United States 🇺🇸 on June 20, 2016
Verified Purchase
This encyclopedia is perfect for a Pirate fan. I enjoyed the statistical aspect of the book as well as the player biographies. I highly recommend for Bucco fans.
Read more
One person found this helpful
Helpful
Report abuse

Expendable1
5.0 out of 5 stars great deal
Reviewed in the United States 🇺🇸 on November 25, 2016
Verified Purchase
Great deal happy to do business with you..
Read more
Helpful
Report abuse

clemente_in_right
VINE VOICE
4.0 out of 5 stars Must-have for Pirates fans
Reviewed in the United States 🇺🇸 on April 11, 2019
This is an excellent resource for Pirates fans. David Finoli and Bill Ranier have done a sizable amount of work in putting this together. The book is organized into several sections. There is a summary of each year for the franchise. The top 100 players are ranked, followed by a list of other players outside the top 100. There are also sections devoted to managers, GMs, owners and announcers. Post-season appearances are also recapped, as are All-Star games that were played in Pittsburgh. The best and most disappointing games are also covered. Lastly, the minor leagues and all-time team records are listed. The book has a fascinating amount of detail that I have reference several times since I bought the book a couple of years ago. The book concludes with a thorough bibliography, but does not have an index.

The second edition was produced following the 2014 season, twelve years after the first addition. I'm hopeful that the authors will make another edition in due time. With a work of this size and scope, errors are bound to happen and there are several that could be cleaned up if a third edition is produced:

In the 1918 season, the authors note the White Sox victory would be the last the 'city of Chicago has seen to date'. This is obviously a miss in re-examining the text after the 1st edition. The White Sox won the World Series in 2005. And the Cubs have won in the years following the release of the 2nd edition.

The 1987 states that Jim Gott was part of the trade package received from San Francisco for Rick Reuschel. That's not correct. Gott was included in the deal that sent Don Robinson to the Giants.

The 2014 season contains numerous names that are not spelled correctly. The include Jayson (not Jason) Nix, Chris (not Tom) Heisey, John Holdzkom (not Holdzkum) and Peter Bourjos (not Bourjois)

There are also several errors in the player sections. Of note:
- Regarding Kent Tekulve's 12 wins in 1973, the authors note 'tied for the Texas League lead.' Tekulve was pitching for Sherbrooke in the Eastern League in 1973
- In the section on Steve Blass, it states the Pirates eventually 'tied things up at three' in the 1971 World Series. The Pirates had a 3-2 lead on the Orioles and the Orioles actually tied things up at three.
- Ron Necciai's career was shortened by a shoulder injury in the 1950s. The authors state that Tommy John surgery wasn't an option, since it had yet to be invented. They are sort of correct. TJ was still two decades away. But that's an operation for an elbow, not a shoulder.
- in the section on managers, the book states that Jim Leyland was from Perrysville, OH. The town is actually Perrysburg.
- in another miss left over from the 1st edition, the authors note in the Cam Bonifay section that, regarding his signing of Pat Meares, the Pirates are 'still saddled with his contract today'.

Toward the back of the book, in the section listing awards won by Pirates players, it lists Gary Sheffield winning the NL Player of the Year award from the Sporting News. Sheffield was a Padre in 1992.