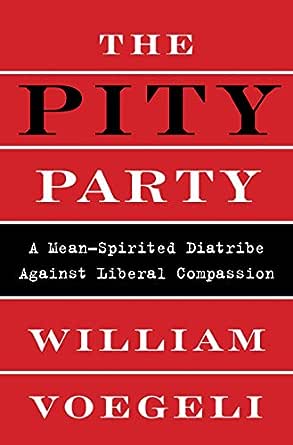 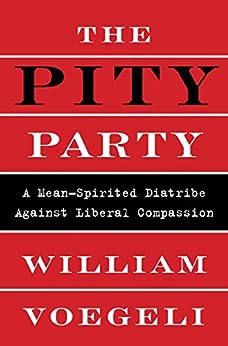 William Voegeli is the author of Never Enough: America's Limitless Welfare State, a visiting scholar at the Henry Salvatori Center at Claremont McKenna College, and a senior editor of The Claremont Review of Books. His reviews and articles have also appeared in City Journal, Commentary, First Things, the Los Angeles Times, National Review, and The New Criterion. He was formerly a program officer at the John M. Olin Foundation. Voegelli lives in Claremont, California.

When liberals don't have reason, authority, or the American people on their side, they turn to the one thing they never run out of: Pity.

For decades, conservatives have chafed at being called "heartless" and "uncaring" by liberals who maintain that our essential choice as a nation is between the politics of kindness and the politics of cruelty. In The Pity Party, political scientist William Voegeli turns the tables on this argument, making the case that "compassion" is neither the essence of personal virtue nor the ultimate purpose of government.

Over the years, liberals have built a remarkable edifice of government programs that are justified by appeals to compassion: Head Start, immigration reform, gun control, affirmative action, and entitlements, to name only some. As Voegeli amply demonstrates, the liberals who promote these massive programs are weirdly indifferent as to whether they succeed. Instead, when the problems they are intended to solve fail to disappear, liberals double down, calling for yet more programs and ever greater expenditures in the name of "compassion." Meanwhile, conservatives who challenge the effectiveness of these programs are slandered as "heartless right-wingers."

Yet rather than challenge this tendentious liberal argument, the many conservatives it intimidates feel it necessary to insist that they really do "care." However, liberal compassion's good intentions consistently fail to translate into good results. Voegeli walks the reader through a plethora of programs that have become battlefields between conservatives fighting for more efficiency and liberals fighting for more budget-busting federal programs to address an ever-expanding catalog of social ills. Along the way, he explains the underpinnings of the liberal philosophy that reinforce this misapplied ideal and shows why today's self-described compassionate liberals are ultimately unfit to govern.

A brilliant turn of a phrase with every turn of a page. Literally. (Randy E. Barnett, Professor of Legal Theory, Georgetown University, and author of Restoring the Lost Constitution) --This text refers to an out of print or unavailable edition of this title.
Read more

4.0 out of 5 stars
4 out of 5
47 global ratings
How are ratings calculated?
To calculate the overall star rating and percentage breakdown by star, we don’t use a simple average. Instead, our system considers things like how recent a review is and if the reviewer bought the item on Amazon. It also analyzes reviews to verify trustworthiness.
Top reviews

Scottman
1.0 out of 5 stars An uninteresting, misleading argument
Reviewed in the United States on July 15, 2020
Verified Purchase
One chapter into William Voegeli's "The Pity Party...", I began writing notes for a review of the book. But, as I progressed through it, the weaknesses of Voegeli's argument descended into simple minded confusion too extensive to justify serious consideration and dialogue. I'm no fan of American Liberalism and I hoped to find some useful new perspectives in the book, but didn't. The fundamental problem with Voegeli's argument is his useless caricature of Liberal ideology, which he argues is fully determined by the idea of compassion. Drawing compassion out of the robust intellectual, philosophical and ideological framework of Americal Liberalism gives Voegeli an easy target, which, unfortunately, obviates the real work needed to specify usefully the limitations of the Liberal agenda. And, he happily avoids that work. Rather, he destroys his straw man time and again with simple-minded arguments, as he meanders through poorly documented and disingenuous discussions of social welfare and international policy issues on which Liberals and Conservatives hav disagreed perennially. Voegeli's ultimate failure results from his willful myopia, his unwillingness to acknowledge that his operational definition of Liberalism is absurdly narrow and misleading. As a result, he draws indefensible conclusions about the failings of American Liberalism, the absurdity of which easily would be revealed by resort to a more honest and robust articulation of Liberal thought and policy. With every one of his conclusions, a fairer, less self-righteous definition of Liberalism would reconcile the anomalies he is eager to exploit to discredit the Liberal project. Throughout his argument, Voegeli fails himself and his reader by criticizing Liberals for their simple-mindedness, when that simple-mindedness is his own argumentative device. There is plenty wrong with American Liberalism, but you won't find useful discussion of its problems here. Voegeli's book is nonsensical, even silly.
Read more
4 people found this helpful
Helpful
Comment Report abuse

Ronald S Schmier
5.0 out of 5 stars If you want to better understand your position
Reviewed in the United States on October 9, 2017
Verified Purchase
If you consider yourself a "liberal" please please read this book. If you want to better understand your position, if you want to really see "Liberalism's" flaws and unintended consequences, please read "The Pity Party". Then just maybe we can find common ground with principled conservative thought. (It is not mead-spirited.)
Read more
9 people found this helpful
Helpful
Comment Report abuse

Amazon Customer
4.0 out of 5 stars A good review of the positions and underlining philosophies of progressives and conservatives.
Reviewed in the United States on August 17, 2020
Verified Purchase
The book is not and easy read but the arguments and positions of liberals and conservatives are well mapped. Some solutions for a more efficient welfare state are offered at the end. I find the progressive approach unsustainable.
Read more
Helpful
Comment Report abuse

Barrett
5.0 out of 5 stars Excellent Read
Reviewed in the United States on February 23, 2016
Verified Purchase
Everyone should read this book. It should be required reading at the high school level. The problem is, our educational system is such a disaster that high school students can barely read to begin with and the Pity Party (the party, not the book) is largely responsible for it..
Read more
3 people found this helpful
Helpful
Comment Report abuse

Most important is the book's insightful commentary on the mend set of the liberal.

His Chapter on Liberal Bullshit and all the projects of the left that demonstrate their lack of familiarity with the truth or honesty is priceless.

Dale B Mortimer, M.D.
5.0 out of 5 stars Profoundly thought–provoking. Voegeli puts eloquently in words what professionals ...
Reviewed in the United States on May 9, 2015
Verified Purchase
Profoundly thought–provoking. Voegeli puts eloquently in words what professionals in fields of corrections and mental health (i.e., psychiatrists) have come to realize after performing hundreds - if not thousands - of interviews with adults most of whom are "professional victims" if not psychopaths. Just remember, everyone lies most of the time. As Voegeli reminds the non–gullible, only a chump believes those who claim they are destitute or otherwise victims without taking considerable time and energy to check out their stories of woe against what really happened and how our "victim" contributed to the infelicitous event or interpersonal conflict.
Read more
7 people found this helpful
Helpful
Comment Report abuse

David Mottershead
5.0 out of 5 stars Worthwhile, whatever your politics.
Reviewed in the United Kingdom on June 4, 2016
Verified Purchase
As a traditional centre-left voter I found this fascinating. It gives a fair insight into the perspectives of right-wing thought and has helped me hear what their commentators are actually saying.
Read more
Report abuse
See all reviews