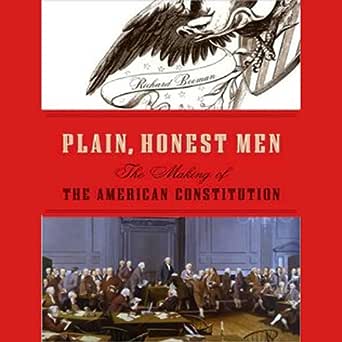 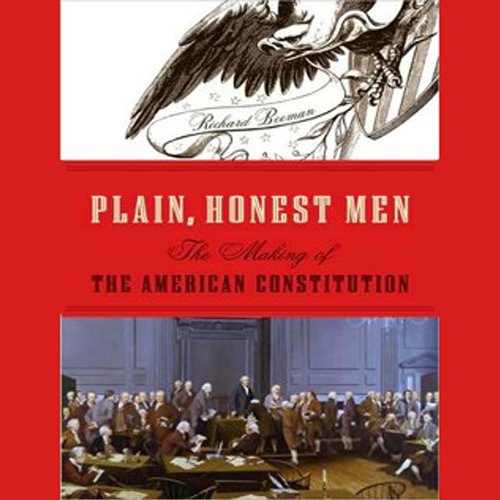 Plain, Honest Men: The Making of the American Constitution

4.6 out of 5 stars
4.6 out of 5
110 customer ratings
How does Amazon calculate star ratings?
Amazon calculates a product’s star ratings based on a machine learned model instead of a raw data average. The model takes into account factors including the age of a rating, whether the ratings are from verified purchasers, and factors that establish reviewer trustworthiness.
Top reviews

rustberg
5.0 out of 5 stars Makes powerful sense and context for all of today's politics
Reviewed in the United States on August 20, 2015
Verified Purchase
What makes this book and the Collier brothers books on the Constitution Convention so compelling is that it blows away so many of the incorrect myths we hold today about the Founding Fathers. One example: when rancor became almost unbearable, Ben Franklin at one point strongly suggested they introduce prayer into daily meetings. The response from the delegates?...Crickets! They overwhelmingly separated their religious practices from their politics. Another obvious example is that while a significant debate in the convention was that of states rights over nationalism, the story of the constitution is the decision to place nationalism above the states. The power to tax and control money was a root issue. This book is a marvelous investigation in perhaps the greatest arena of conflict resolution. The delegates were some of the most brilliant minds trying to deal with a seemingly insoluble problem—how to form a stronger government that wouldn't become tyrannical. Their opinions spanned extremes that didn't seem possible to bridge. The convention almost fell apart several times. Crucial and heartbreaking compromises (such as supporting slavery) kept it together. After reading this book, you come away not just with a feeling of awe, but a sense of nuance. All the powerful debates and conflicts these Founding Fathers fought over continue in our present times. After reading this book, you understand today's headlines in a constitutional context. Our constitution was/is ratified, but the voices of dissent with the same concerns and protests also continue. Clearly, allowing for this continual debate is the strength of our government. Plain, Honest Men lets us know we are still living and thriving in the Founding Father's world. Our issues of taxation, debt, immigration, foreign intervention, state's rights—are no less complex now than what the framers of the constitution faced in 1787 with huge foreign debt from the revolutionary war, powerful issues regarding slavery and Native Americans, foreign threats from England, Spain, and France, and states essentially refusing to pay taxes to a national congress. This book makes the drama of the constitutional convention of 1787 feel like its happening in 2015.
Read more
15 people found this helpful
Helpful
Comment Report abuse

C. Grosse
5.0 out of 5 stars Plain, Honest Men Act For The Ages
Reviewed in the United States on May 8, 2017
Verified Purchase
Richard Beeman has crafted a fascinating story of the summer of 1787 in Philadelphia when a group of, in his description, 'plain and honest men', got together to draft a new document to govern the fledgling United States of America and, without meaning to, wrote for the ages. Beeman tells how the delegates met with divergent ideas on what needed to be done, from minor revisions to the Articles of Confederation to a totally new plan of governing. He writes about the backgrounds and careers of most of the principal actors and details the bumpy path they traveled together to produce the final Constitution of the United States. Beeman tells his tale with skill and care to show that some fifty delegates although disagreeing violently at times were able to compromise and reason their way together.
Read more
4 people found this helpful
Helpful
Comment Report abuse

C. M Mills
TOP 500 REVIEWER
5.0 out of 5 stars This popular history of the May-September 1787 making of the US Constitution by Dr. Richard Beeman is superb popular history
Reviewed in the United States on March 5, 2014
Verified Purchase
The most momentous event in the history of the early American republic is the drafting of the United States Constitution in Philadelphia from May to September 17, 1787. Dr. Richard Beeman a distinguished professor of history at the University of Pennsylvania and an expert on the Constitution has written the best popular account of the event in this generation of scholars.
The president of the Constitutional drafting meeting was General George Washington who would later become the first POTUS.
Delegates from twelve of the thirteen states (Rhode Island did not send delegates) met in the Pennsylvania State House for long hours during the spring, summer and fall of that distant year. Philadelphia had a population of 40,000 in 1787. The fifty-five delegates were housed in private homes, inns and boardinghouses.
Among the distinguished members of the constitution drafting convention were James Madison the writer of the best of the future Federalist Papers and fourth POTUS: Benjamin Franklin of Philadelphia, the Pickneys of South Carolina, Elbridge Gerry of Massachusetts and Luther Martin of Maryland. Delegate G. Morris of Pennsylvania came up with the idea of dividing the federal government into three branches: legislative, judicial and executive. Slavery was the elephant in the room! Twenty-five of the fifty five delegates were slave owners George Mason of Virginia owned over three hundred African-American slaves.
Many of the battles raged over the large states wanting proportional representation in Congress. It was decided that one member would represent 30,000 persons in congressional districts in the United States House of Representatives while two senators would represent each of the states. One of the most interesting parts of the book concerns the executive branch. Many compromises were required and the state conventions between the Federalist and Anti-Federalists supports was fierce. In 1789 The US Constitution at last became operable. The document ended the weak continental congress governed by the Articles of Confederation. Shays rebellion and the inability of the continental congress to tax or wield military power evinced a dire need for a Constitution.
Beeman writes with fluidity and interest on the complex topic of the Constitution. His descriptions of the leading participants and the major issues facing the delegates makes for fascinating reading. This book could be used with efficacy in a college course on the US Constitution. Excellent and essential for students of American government!

slowreader
4.0 out of 5 stars so many questions answered and unanswered
Reviewed in the United Kingdom on May 7, 2013
Verified Purchase
This is a great read. A lot of the questions I had about the American constitution are answered here. However it also raises a lot of questions too. I know the author had limited time and space but just a little more about the settling of the Bill of Rights would have been as important as the discussion on Ratification. Maybe that's just me.
Read more
One person found this helpful
Helpful
Sending feedback...
Thank you for your feedback.
Sorry, we failed to record your vote. Please try again
Report abuse