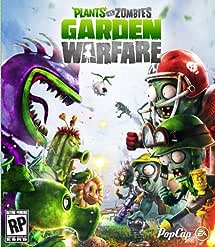 Visit the Electronic Arts Store
Platform : Windows 8, Windows 7 |
Rated: Everyone
| DRM: Origin
2.9 out of 5 stars 10 ratings
Currently unavailable.
We don't know when or if this item will be back in stock.
Send your purchase instantly to your Electronic Arts account. How Account Linking Works

Link your Amazon account with a new or existing Electronic Arts account so that you can purchase virtual items and upgrades on Amazon.com and send them directly to your account.

Note: After purchase, you can access the item in Your Games Library.
By placing your order, you agree to our Terms of Use.
This product is non-returnable and non-refundable.
Note: Currently, this item is available only to customers located in the United States.

Plants vs. Zombies Garden Warfare digs into the trenches with an explosive new action experience. Blast zombies, plants and new characters across a mine-blowing world that delivers the depth of a traditional online shooter blended on high with the refreshing humor of Plant vs. Zombies. Take on Co-op and Multiplayer action with your friends and sow the seeds of victory!

2.9 out of 5 stars
2.9 out of 5
10 global ratings
How are ratings calculated?
To calculate the overall star rating and percentage breakdown by star, we don’t use a simple average. Instead, our system considers things like how recent a review is and if the reviewer bought the item on Amazon. It also analyzes reviews to verify trustworthiness.

James Reyes
5.0 out of 5 stars My 2 cents
Reviewed in the United States on August 12, 2014
Platform: Instant AccessVerified Purchase
The game is just tons of fun.
Me and my niece play all day.
Watch out for the online code, thou.
The code is for only pc or mac.
Not a code to download it onto a ps4 or xbox one.
Learned the hard way.

Philip Laurence Foster
5.0 out of 5 stars Buy it if you like 3rd Person Shooters!
Reviewed in the United States on October 2, 2014
Platform: Instant AccessVerified Purchase
I've been very happy with this game. A cheaper price than what I'd get through Origin, and a very satisfying game. It literally feels like what the PvZ games as Third Person Shooter should feel. The free updates are amazing as well. Can't say enough good about this game.
Read more
One person found this helpful
Helpful
Comment Report abuse

Andrea Celeste
2.0 out of 5 stars Unplayable
Reviewed in the United States on December 26, 2014
Platform: Instant AccessVerified Purchase
I thought this game seemed fun - when it worked. It was very glitchy on my computer. I tried several things to fix it, reading forums and asking customer support for hep - and I could never get it to work. My computer is more than adequate (I built it less than a year ago with top of the line components) and I play many other games just fine. It just froze a lot. I play other games on the internet as well so it wasn't the internet that was causing the problem. It was impossible to play with anyone because it was impossible for my "plant" to move. It would jump back and forth. If I tried to go straight, it would go straight for a few steps and then teleport me back to where I started. I couldn't move. I played for a few hours, trying to see if it would get better. I ended up getting a refund because it was completely unplayable.
Read more
One person found this helpful
Helpful
Comment Report abuse

Edward Lam
5.0 out of 5 stars Very Good Compared to the Xbox Version
Reviewed in the United States on September 13, 2015
Platform: Instant AccessVerified Purchase
The game takes a while to download (depends on your computer) and has decent graphics compared to the xbox
Read more
Helpful
Comment Report abuse

M.W.
4.0 out of 5 stars Great game, if you ignore the glitches! (Origin required. Ignore that too.)
Reviewed in the United States on June 24, 2014
Platform: Instant AccessVerified Purchase
I love FPS games, but the drudgery that comes along with them in most franchises can get a little boring from time to time. Plants vs Zombies Garden Warfare is a breath of fresh air with it's colorful atmosphere and goofy characters. It plays nice, and the characters are all evenly balanced (except for the Chompers, imo), but there's been a bit of lag recently that I'm guessing is due to it being launched today (as of this writing). It has only crashed a total of two times, which isn't terrible, and I'm sure most of the bugs will be cleared out when future patches arrive. While it's easy to get into it can be difficult to master handling all the various roles of the characters, so there's lots of replay value. I can easily see myself playing this years in the future.

While they technically have the Garden Ops mode, which can be single-player, it's difficult level design really calls for teamwork. Other modes include the Welcome Mat (for beginners), Team Vanquish (the first team to 50 vanquishes of the other team wins), Gardens and Graveyards (similar to Team Fortress, you either defend or attack a team's base), and the classic version of those two modes where customization and upgrades for your characters are not allowed. In addition, there's a Mixed Mode (a simple mishmash of Team Vanquish and Gardens and Graveyards) and Gnome Bomb, which resembles capture the flag. A good number of maps (6 or 7 the last time I counted) allow for interesting gameplay as well, my favorite being Jewel Junction. Just watch out for the... well, you'll see what I'm talking about if you pick up the game.

In order to purchase PvZ:GW through Amazon's Instant Access, you have to link your Origin account first (if you haven't already) before downloading the game from the client. (You will need an Origin account to play either way, just a heads up. It's free to download, but a number of people refuse to download it for reasons I will leave up to you to research.) In any case, it's definitely a better deal to get the PC version (or PS4 version, when it becomes available) and avoid the costs associated with XBOX live.

If you're still unsure about buying, I would recommend you look up gameplay videos on YouTube. But for about $30 I'd say it's well worth it!
Read more
9 people found this helpful
Helpful
Comment Report abuse

david simonton
1.0 out of 5 stars dont buy download
Reviewed in the United States on September 10, 2017
Platform: Instant AccessVerified Purchase
took a computer tech 2 hours to get it to work after I downloaded it twice (paying for it both times, with no cancel button ). then played one session. shut it down. started loading then stuck with a black screen, and that cute little flower spinning. could only shut down with alt/ctrl/delete. have two useless down loads.
Read more
Helpful
Comment Report abuse

Daniela Mercati
1.0 out of 5 stars One Star
Reviewed in the United States on March 3, 2016
Platform: Instant AccessVerified Purchase
if you have a Mac, don't buy it, it doesn't work and they don't say.
Read more
Helpful
Comment Report abuse

DG33
1.0 out of 5 stars There is nothing instant about trying to access the the game
Reviewed in the United States on September 7, 2014
Platform: Instant AccessVerified Purchase
It is Monday, I bought this game on Sunday, but this instant access game was not available on Sunday. Today, after work, I noticed the game was finally available. I started the download of this instant access game about two hours ago, and the download is only 12% complete. Simple math says that the download will not be complete for another 14 hours.
Read more
One person found this helpful
Helpful
Comment Report abuse
See all reviews