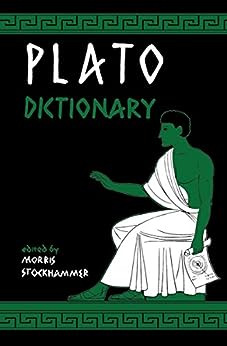 Morris Stockhammer was a lexicographer and historian known for his subject dictionaries on famous philosophers including Immanuel Kant, Plato, Karl Marx, and Thomas Aquinas. He also published on European economics and history.
--This text refers to an alternate kindle_edition edition.

Malamati
1.0 out of 5 stars Not a Real Dictionary, but a Selection of Quotations
Reviewed in the United States on March 24, 2016
Many who settle in to study Plato in earnest realize that many technical terms and special concepts are "in play" in his dialogs. Accordingly, a proper understanding of his works requires careful understanding of the way in which he uses such terms. This requires three things at minimum: (1) a good translation of the dialogs that includes the universally-recognized "Stephanus" reference numbers, (2) a reliable 'companion' or guidebook that enables the modern reader to understand the structure and essential points of Plato's/Socrates' arguments, and (3) access to a dictionary or glossary of terms that explains the meaning of key terms or concepts (ideally, one that includes both the priginal Greek terms and their English translations). The "Plato Dictionary" would obviously aim to meet the third need, but I'm sorry to say that it is quite inadequate for serious use.

The book is mystifyingly silent on the identity and qualifications of its producer. The cover and very minimal introductory material say only "Edited by Morris Stockhammer." In my experience, an editor is not a primary author or writer; this leaves me wondering whether Mr. Stockhammer actually wrote the entries or found them elsewhere and assembled them in this volume. There is a short preface signed "Theodore E. James, Manhattan College" that summarizes the little that is known of Plato's life, and some background on his era and philosophical "project." In addition, there is an introduction signed "M.S." which appears to be the editor's own interpretation of what Plato intended to do. A central focus of this essay is to distinguish freedom from virtue, and emphasizes that Plato's central intent was to explore and define moral imperatives--even in one of his essential concepts, that of the "eide," which is normally translated as "idea," "form" or "pattern." Though Plato's conception and use of the eideia is one of the most difficult to understand, the essay confidently asserts that ideas are "moral-ideas, value-ideas."

I do find section VI of the prefatory comments objectional, since they contain these comments: "...this book...is written in a non-technical language--as philosophy should be written. For philosophy is only a general science which can be expressed in generally understandable terms; only the particular science of an expert must use 'termini technici.' While most of us can wish this were the case (and ALL of us who dive into the works of a Kant, Hegel, Heidegger, Bergson, Sartre, or Plato), the fact is that philosophers' writing is notorious for including 'termini technici' that require considerable explanation. If it were otherwise, dictionaries and explanatory references, including the Plato Dictionary, would be unnecessary.

As to the work itself: The Dictionary is arranged alphabetically, using translated English terms only--no primary Greek terms are used, either in Greek alphabetic or English transliterated form. This is one of my chief objections to the work, since it is already at one remove from the source terms themselves. Another chief--and fatal--objection is that this Dictionary doesn't actually DEFINE terms, but simply quotes their use directly as they appear in various of the dialogs (quoting from Benjamin Jowett's 19th century translations, which, though dated, can be considered reliable and acceptably accurate). The "quotation" approach is entirely inadequate to explain or define what a term means, or how Plato may typically use it in varying contexts.

A couple of examples, quoted directly from this book, will suffice:

"Allegory. 'The narrative of Hephaestus binding Hera his mother, or how on another occasion Zeus sent him flying for taking her part when she was being beaten, and all the battles of the gods in Homer--these tales must not be admitted into our state, either wrought in allegory or without allegory. For a young person cannot judge what is allegorical and what is literal; anything that he receives into his mind at that age is likely to become indelible and unalterable, and therefore it is most important that the stories which the young first hear should be models of virtuous thoughts. --Republic, II, 378."

This somewhat lengthy QUOTATION, while appropriate as an example of Jowett's rendering of Plato's use of "allegory," provides no DEFINITION of the term, and no discussion of its importance to Plato's concern (which is about "hyponoia," or concealed meaning). Plato actually used the word "hyponoia," not "allegoria," and the Dictionary repeats Jowett's decision to render ALLEGORY rather than what coould be considered a more accurate, if painstaking, translation.

"Appetite. 'I had been overcome by a sort of wild beast appetite.--Charmides, 155.'

In Plato's usage, the appetite, or "the appetitive" (desiring, acqusitive) is one of three key attributes of the "psyche," or "soul"--and as such it is profoundly important to understand what he means by this quality and its importance to Plato's conception of the human individual (and, by his own analogous extension, of the human polis, or city). The Republic is the work in which "the appetitive" quality is most extensively discussed--and to limit the Dictionary's "definition" (which again is merely a verbatim quote of USAGE) of this vital term to a single line from the Charmides is frankly ludicrous.

These are just two examples from the "A" section of this book that reflect its inadequacy as a source of accurate and scrupulous definitions of Platonic terms. I can't recommend it, and though I acknowledge the author's (editor's ?) good intent and very considerable effort to produce it, have to give it a single star, which unfortunately reflects its inadequacy for serious study.

There is a "historical lexicon" called "Greek Philosophical Terms" by F.E. Peters that I can recommend--but it is well above the needs or interests of the casual reader, and should be considered (and appreciated) by the serious student.
Read more
13 people found this helpful
Helpful
Report abuse
See all reviews