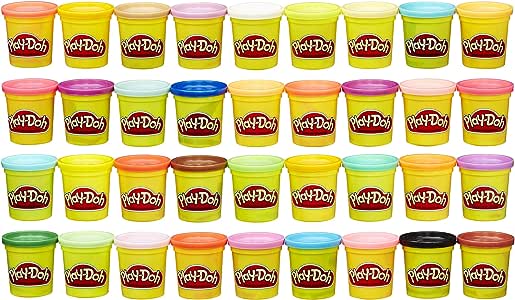 Hasbro is committed to being an ethical and responsible company and is a recognized toy industry leader in the areas of product safety, environmental sustainability, ethical sourcing and philanthropy.

Open a Can of Imagination

Inside every kid is an explorer and an original creator. Inside every can of Play-Doh compound is a colorful, irresistible invitation to explore creativity in a hands-on, uninhibited way. Coincidence? Definitely not. That's because the Play-Doh brand empowers kids to shape their own stories and anything else they can imagine. It gives them the freedom to turn what they know into something amazing and unexpected, and there's always an adventure, masterpiece, or gigglefest waiting to happen.

So go ahead – Open a Can of Imagination.

Creative Inspiration - How to Make a Sunflower

Would You Believe It?

Urban legend has it that if you took all the Play-Doh Compound created since 1956 and put it through the Play-Doh Fun Factory playset, it would make a snake that would wrap around the world 300 times.

Play-Doh compound is non-toxic, non-irritating & non-allergenic except as noted: Children who are allergic to wheat gluten may have an allergic reaction to this product. Also, due to the high salt content in Play-Doh compound, the product can be harmful to pets if ingested.

This Mega 36-pack is full of Mega fun! These bounce Play-Doh cans come in 36 assorted colors For all of your creative needs. From birthday gifts and party favors, to kid party crafts and classroom activities, these cans are full of everyone's favorite non-toxic Play-Doh compound. This Play-Doh set is great for kids ages 2 and up who love to squish, mix, and make fun creations with Arts and crafts like modeling clay. It ships in simple recyclable packaging that's easy to open and frustration free. The Play-Doh cans and lids are also recyclable to help build a more sustainable world!

4.8 out of 5 stars
4.8 out of 5
6,957 global ratings
How are ratings calculated?
To calculate the overall star rating and percentage breakdown by star, we don’t use a simple average. Instead, our system considers things like how recent a review is and if the reviewer bought the item on Amazon. It also analyzes reviews to verify trustworthiness.

Dionne B.
5.0 out of 5 stars Toddler Staple
Reviewed in the United States on March 12, 2015
Verified Purchase
Great value at $16. Months of fun for a small investment. My 2.5 year old loves his play-doh (and mom is a big fan too). Cans are not full sized but approximately 2/3 the size of a regular can. I will attempt to attach photos so that you can see the comparisons of both the containers and contents.
Read more

BrandieP
5.0 out of 5 stars Happy
Reviewed in the United States on April 5, 2017
Verified Purchase
I set my expectations slightly lower because of some of the low reviews, but I am very satisfied with my purchase. Four cans were duplicates and a few others were awfully close in color but not quite the same. I did not receive a basic red (although there are two shades of fluorescent red), but the orange, yellow, green, blue, and violet look great. As you can see in the attached photo, there is also nearly every color in between. All are nice and soft; none were bad. The colors in the photo are pretty close to true, but I couldn't get it exactly right. The bright pink next to the fluorescent red actually has more of a redish shade. Moving clockwise, the bright reds are actually three different shades. The lower one ( with a duplicate) is slightly darker and the upper one is more orange, with the middle one pretty much in between. The bright yellow near the top has a tinge of green and the truer yellow to the left is a bit brighter than the photo shows. The light yellow next to the white is more of a neutral color than yellow, even though it looks pastel here. The rest are pretty spot on.
Read more

MommaB
4.0 out of 5 stars Did Formula Change?
Reviewed in the United States on February 18, 2018
Verified Purchase
There’s not a lot that can be said about Play-Doh that everyone doesn’t already know. That being said, let’s focus on price, duration, size, and color!

- I did receive every shade of primary color as well as everything in between. I wish I’d gotten doubles of the red or black, but got double of lavender, a daffodil-colored yellow, and hot pink. There were shades of Play-Doh I didn’t even know existed! I chose the frustration-free packaging (I LOVE that this is an option now) but ended up keeping the box for storage.
- These are not full-sized cans, but for the volume it’s still worth it!
- Unlike some of what I read before I bought these, the cans we got did not last very long. Play time was very well controlled and everything got put back and sealed, but I had to “refresh” nearly all of them several times over (with a plastic baggie, water, and a lot of mashing. We bought this as a Christmas gift and as of mid-February we’ve now thrown them all away. What’s funny is the pack I got in June of last year was played with in a similar fashion but lasted until December with very, very few “refreshes” needed. Did something change or did I get an old package?
- For the price I paid, I would not order these again. It sounds like most people got their packs for $16-20 if I’m reading things right. I paid $26 before tax for this box and will not do it again. Not enough value for price. I’ll be looking for another vendor next time around, or waiting for a price drop!

**Refreshment Tip: If it’s beginning to dry out, you can get away with putting a few drops of water on top and then sealing up. Some will seep in but you’ll still have to get your hands dirty by squishing and smashing to distribute. If it’s REALLY dry, like you’re thinking it’s better as a paper weight than Play-Doh, break it up as best you can, put in a plastic baggie or sealed container, and run a tablespoon or more of hot water. Let it sit for a while (or if you want to be frustrated start mashing right away) and then use a fork or fingers to get it moving again. I often end up with a lot of extra water that’s easily wicked away with a paper towel but it does get it back to near-new. It’s just a lot of work!

As you can see in the pics, the kiddos had a good time making food on Christmas Day! Just wish it had lasted a bit longer. 😊 Hope this was helpful for you!

Brooke
5.0 out of 5 stars Perfect for a party
Reviewed in the United States on March 10, 2019
Verified Purchase
Bought a large quantity of playdoh for a rainbow playdoh party my daughter loved it !! Got all the colors and all the kids loved it colors were mixed but everyone had a great time. If you need playdoh all the colors this is your box
Read more

Jolene C.
3.0 out of 5 stars Severely damaged containers
Reviewed in the United States on September 14, 2016
Verified Purchase
Bought the 36 pack for my son's kindergarten class. A quarter of them (9) were severely smashed. The playdoh was still ok, just hard to get out, but I was embarrassed.
Read more

S. Lionel
VINE VOICE
5.0 out of 5 stars A hit as a Halloween hand-out!
Reviewed in the United States on November 4, 2017
Verified Purchase
I handed these out to younger kids for Halloween and they were a hit. One boy said, "My Dad hates Play-Doh so this is great!" I saw that there was a Halloween-themed assortment of smaller containers, but this one is the better value (and more interesting, I thought.) I didn't get through all of them (we don't get a lot of kids trick-or-treating), so I have some for next year.
Read more
15 people found this helpful
Helpful
Comment Report abuse

Don and Tanya
5.0 out of 5 stars wide variety of colors!
Reviewed in the United States on October 26, 2017
Verified Purchase
Such a variety of color! I buy in bulk allot and I am used to getting a box with allot of the same colors and a few other colors thrown in. I was happily surprised to find that there were no two colors alike! I purchased 2 cases for Angel Tree gift bags and I will deffinately purchase these again.
Read more
15 people found this helpful
Helpful
Comment Report abuse

Jason Brindamour
5.0 out of 5 stars Love these
Reviewed in the United States on January 25, 2017
Verified Purchase
I got this for my girlfriend who is 34 years old. She loved this more than any gift I got her. The amount of colors was very impressive and she really likes them. The box contained very fresh plastic cans of the product like it was made yesterday, the lids were very tight and she really loves the brand new Play Doh smell...LOL.
If you want to see what neat colors they have come up with, I recommend this set....I never knew there was black Play Doh...lol
Read more
18 people found this helpful
Helpful
Comment Report abuse
See all reviews

doc
5.0 out of 5 stars Best Play Doh Deal
Reviewed in Canada on December 14, 2019
Verified Purchase
At around 50 cents a container, this is the best deal I have seen on play doh this year. Would have provided photo but this is already wrapped up for my niece for Xmas. I know she will love it.

Amazing deal! Get it while you can.
Read more
3 people found this helpful
Report abuse

Amazon Customer
5.0 out of 5 stars Great Fun!
Reviewed in Canada on August 29, 2018
Verified Purchase
I purchased this set to use in stem boxes that I am putting together for our home-school class. It's great to have so many, 36 containers. They are a little smaller than the regular ones, but there are so many of them it doesn't matter. Along with that, many of the colors are duplicated. Great fun to be had with these.
Read more
2 people found this helpful
Report abuse

Adam Cameron
5.0 out of 5 stars 36 Cans of Nature's Finest. Picked at peak of freshness and canned.
Reviewed in Canada on September 9, 2019
Verified Purchase
This is a good selection of dough (Doh!). You could roll in this dough. My needs will be met for several weeks considering the number of cans involved. There is a slightly salty taste to the dough, but it has the soft consistency that I was looking for.
Read more
2 people found this helpful
Report abuse
See all reviews