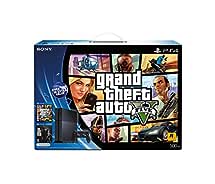 A young street hustler, a retired bank robber and a terrifying psychopath must pull off a series of dangerous heists to survive in a ruthless city in which they can trust nobody, least of all each other. Experience Grand Theft Auto V like never before with across-the-board graphical and technical enhancements for a deeper, more vibrant world on the PS4 system.

Explore a hostile post-pandemic world in The Last of Us Remastered for the PS4 system as you experience the award winning story of Joel and Ellie, two survivors who must rely on each other through a brutal journey across what remains of the USA.

4.8 out of 5 stars
4.8 out of 5
1,342 global ratings
How are ratings calculated?
To calculate the overall star rating and percentage breakdown by star, we don’t use a simple average. Instead, our system considers things like how recent a review is and if the reviewer bought the item on Amazon. It also analyzes reviews to verify trustworthiness.

Oskar Ibrahim
5.0 out of 5 stars Brand new "PS4 Black Friday Bundle" from 2014 in 2020!
Reviewed in the United States on October 18, 2020
Verified Purchase
I bought this PS4 Fat Bundle, marked as new from the seller "Holiday Electronics Deal". I was a little unsure if was the right product since it's a bundle sold in 2014. Today in 2020 it's very difficult to find it sealed and new.

However I was surprised to see that was indeed the "PS4 Black Friday Bundle with GTA V and TLOU Remastered" from 2014 after receiving it at my house, exactly the same as the pictures, completely sealed and new!

The box was a little scratched on the outside due to the time it was stored all these years (as I comment is a bundle that came out 6 years ago) However, the whole interior is completely new, working, just as if you bought it in 2014.

This is a console that I get specifically for my PlayStation collection.

The price is very high (519 USD at this time), but it was a model that I wanted sealed and in perfect condition, so I made the effort since I do not know when I would find it again at this point. I sold my original PS4 FAT a few years ago and during this year I have wanted to recover it (perfect, with manuals, plastic, etc.) I only found used models that did not satisfy my requirements.

So if you are such a perfectionist as I am and you are looking for this specific bundle brand new, you can confidently buy it from this seller and know that the cost will be worth it.

The shipment was fast and made by Amazon, note that I made the purchase from abroad and it arrived in just 3 days from USA via UPS.

The packaging is Amazon standard, just protected by a large piece of paper to keep it from moving, so don't expect too much with this part. Also I had no problems with the customs of my country since Amazon took care of the paperwork.

Finally I only can say that I am very happy with my purchase and that the money I spent on this has been worth it.

Bruce
5.0 out of 5 stars Worth the Purchase (Former PS2 Owner to Xbox back to Sony Convert)
Reviewed in the United States on February 28, 2015
Verified Purchase
This is an awesome bundle. GTA 5 is a great game. The ability to download "The Last of Us" is convenient, but does take a bit to download from the store. I was able to begin playing GTA 5 after about 45 minute PS4 system update, then about a 45 minutes game install + 15 minutes update. I had some issues signing into my previously made PSN account, but after about 5 tries it worked. The inital setup is relatively painless.

I really like the user interface on here as well. Switching from Xbox 360 I was worried there would be a learning curve as to where/how to locate certain settings or preferences. And although there is one, it isn't as bad as I thought it would be. The controller feels nice. In game I keep accidentally hitting the touchpad and causing some issues with switiching weapons unintentionally, so I'm trying to correct that.

All in all, I really am enjoying this purchase. If you get a this bundle or any PS4, automatically get or try a playstation plus account. The amount of free games and demo's you can get make it a worthwhile purchase. 2 full feature games free a month. And just from what I've gotten so far in the free games, "Apotheon" & "Transistor" have reafirmed in my opinion that Sony really does do a slightly better job with consoles than Microsoft. The games are, I feel, of better quality and more enjoyable than the last few months of free games from Xbox. They also have a discounts section on classic titles or bundled special edition titles.

Before I owned an Xbox, I owned a PS2. I played a variety of games on that, that after realizing my time on Xbox, I didn't really play. Tenchu, Ace Combat and so forth. And it wasn't that they weren't available, but the community on them for Xbox was quite small compared to the Sony one. So in essence, you kind of had to go with the herd. Choosing Sony of Microsoft this time around has reminded me of why I am a Sony fan. Just the vast array of titles, styles, art and selection really has reminded me that Sony is a fantastic publisher and I'm really excited to see what all they have to come up with in the coming years.
Read more
4 people found this helpful
Helpful
Comment Report abuse

TDM Style
5.0 out of 5 stars Best. Purchase. Ever.
Reviewed in the United States on December 15, 2014
Verified Purchase
Absolutely the best purchase I've made in a while. Even though I chose the Xbox 360 over the PS3, I knew that there was no contest here. Xbox ruined their chances with me when their release keynote was entirely about "how to watch sports on your Xbox," not to mention the whole licensing/game sharing debacle. The PS4 was my choice from the get-go, and now that I've finally made the purchase, I couldn't be happier!

The graphics are stunning, and one thing that really impresses me is overall system performance. The machine is so fast and snappy it's almost unbelievable. For instance, I could be mid game, hit the PS button, and instantly be at the system menu to join a party, tweak a setting, etc. A click or two and I'm instantly back in game. No more holding the button and waiting 5 seconds, then waiting 30 seconds for the menu to load, etc. It's literally almost instantaneous. The system also runs very quiet, and surprisingly stays cool (even when leaving it on for 8 hours at a time).

I'm also really impressed with the controller. Firstly, I can't express how happy I am that it's rechargeable and I no longer have to buy a billion AA batteries every year. The battery life isn't superb, but having an extra controller and a charging dock eliminates that issue. The controller itself has been revamped (but not in such a way that it's changed drastically) and fits very nicely in your hands, handles great, and is super comfortable. The touchpad is a nice little feature too.

Page 1 of 1 Start overPage 1 of 1
This shopping feature will continue to load items when the Enter key is pressed. In order to navigate out of this carousel please use your heading shortcut key to navigate to the next or previous heading.
Back
Next
Pages with related products. See and discover other items: 4 player xbox 360 games, gb games, xbox exclusive games, playstation 4 cyber monday, ps4 games black friday deals, playstation system