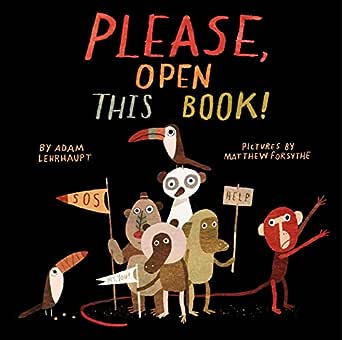 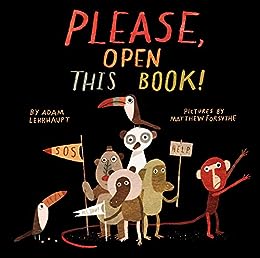 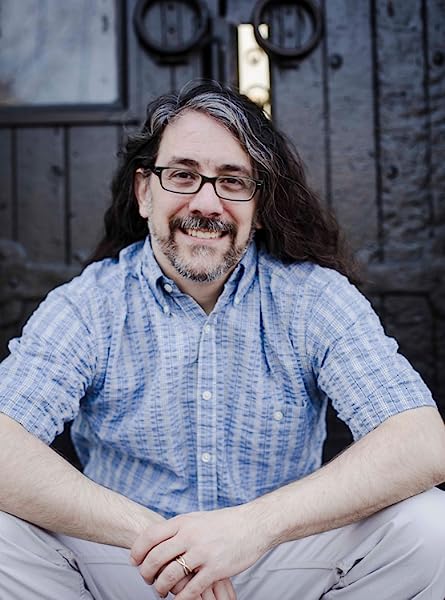 As the manic animals from Warning! Do Not Open This Book! (2013) return, now exhorting readers not to close the book. A monkey with a lantern illuminating ink-black pages rejoices: "You opened the book. We're saved!" Illustrating many of the terrible things that can happen when a book is closed, Forsythe produces an alligator in a cast, a toucan with a bandaged beak, and a frightened lemur peeking from a box. A battered banana is proffered as further evidence. Stalling readers from reaching the book's end, the narrator offers to change the story. "We'll write something with a hero and heroine. You'll like it. It will be a good story!" Amusingly, the earth-toned, digitally composed illustrations depict a gorilla hunkered over a typewriter; strewn about are drafts whose only word is "banana." More bribes (that banana, now half-eaten) naturally won't deter readers from turning the pages. The panicky monkey laments: "One more page and… // THIS BOOK WILL BE // …CLOSED!" This anguished word winds up on the back cover, with small-print instructions: "You can fix this. Flip it over and…." The metafictive silliness will require the suspension of disbelief: if a closed book could hurt its characters, wouldn't a page turn inflict some minor injury? (Kirkus August 1, 2015)

InWarning: Do Not Open This Book! Lehrhaupt begged readers not to allow theanimals in that book to escape; now, the animals plead with children to leavethis book open, so they aren’t trapped inside. Lehrhaupt’s humor is sharperthis time around, even edgy—a toucan and gator wear bandages, suggesting thatshutting a book doesn’t just trap characters, it injures them. Set againstblack backgrounds, Forsythe’s digital artwork is equally attuned to theslightly sadistic mood. As book’s end approaches, he delivers an extremeclose-up of a dewy-eyed monkey making its desperate plea to readers: “We’ll begood. Promise.” (Publishers Weekly September 28, 2015)

In contrast to the bright pages of their popular Warning! Do Not Open This Book (2013), here the mood,

along with the interior, is dark. And why not? A group of animals are stuck inside, someone having closed

the book with them in it. Monkey, who bears a resemblance to Mr. Potato Head, is an almost hysterical

narrator, and when he is most insistent, the font of his words increases and exclamation marks appear.

Kids, who will love being in on the joke, will enjoy the illustrations that prove the damage a closed book

creates: an alligator in a sling, a toucan with a bandaged beak, a much bruised banana. The collagelike

illustrations, rendered digitally, have slightly blurred, soft hues, as if they have lost some crispness through

rejection, and are set against black pages. Tension rises as those pages are turned, because they will

eventually lead to . . . the closing of the book. Pair with Press Here, by Hervé Tullet (2013), for another

opportunity for direct reader involvement, or Mo Willems’ We Are in a Book! (2010) to meet another selfconscious

Adam Lehrhaupt’s first picture book, Warning: Do Not Open This Book!, received the E.B. White Read Aloud Honor Award, was an ALA Notable Book, and a Huffington Post Notable Book. School Library Journal called it, “More fun than a barrel of monkeys.” He is also the author of Please, Open This Book!, which was named a Wanda Gag Comstock Read Aloud Honor Book and Idea Jar. Adam has traveled to six continents, performed on Broadway, and lived on a communal farm. He currently lives in the suburbs of Philadelphia, Pennsylvania, with his wife, sons, and two bizarre dogs. Visit him online at AdamLehrhaupt.com.

Matthew Forsythe is an award-winning comic book artist and illustrator. His first children’s book, My Name Is Elizabeth! by Annika Dunklee, was a named a 2011 New York Times Notable Children’s Book. His first comic, Ojingogo, was nominated for an Eisner Award and won a Doug Wight Award for Best Experimental Comic. His illustrations have appeared in many publications including The New York Times and The Wall Street Journal. Formerly the lead designer on the animated series Adventure Time on the Cartoon Network, he now lives in Canada and is working on his next book. Visit him at ComingUpforAir.net.