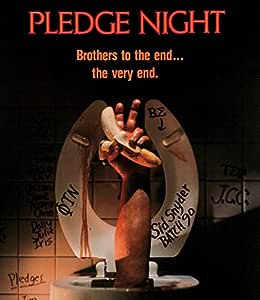 Joey Belladonna (Actor), Will Kempe (Actor), Paul Ziller (Director) & 0 more Rated:
R
Format: Blu-ray
3.7 out of 5 stars 19 ratings
Available at a lower price from other sellers that may not offer free Prime shipping.

It's hazing season at Phi Up and the boys are up to all sorts of nasty pranks on their hapless pledges, in between regular bouts of 'wetting their whistles' at the campus watering hole…with some of the area's beautiful sorority babes. But this is going to be one literal 'hell week' as they unwittingly unleash the spirit of Acid Sid; an unfortunate pledge who was accidentally dissolved in acid during a hazing prank gone wrong some 20 years earlier. As the helpless fratboys and pledges fall victim to Sid's wrath and seemingly indestructible towering zombie corpse, it's up to the stragglers to figure out how to kill someone who's been dead for two decades, or die trying.

A truly one-of-a-kind blending of post-Animal House T&A sex comedy and gore filled supernatural slasher, Paul Ziller's PLEDGE NIGHT unloads a nearly non-stop barrage of weirdness on the viewer. From the jaw dropping, all-based-on-actual-practices, hazing rituals, as meticulously researched by writer/producer Joyce Synder (Raw Talent), to the slimy and often 'explosive' gore, from effects wizard Robert Mulvey, along with a soundtrack performed by Anthrax, whose singer, Joey Belladonna makes a memorable onscreen appearance, PLEDGE NIGHT serves up a non-stop ride of horror and weirdness guaranteed to keep you glued to the screen, mouth agape. Vinegar Syndrome is excited to offer up this one-of-a-kind slice of sleaze on Blu-ray for the very first time, newly restored in 2k from its original 35mm camera negative.

3.7 out of 5 stars
3.7 out of 5
19 customer ratings
How does Amazon calculate star ratings?
Amazon calculates a product’s star ratings based on a machine learned model instead of a raw data average. The model takes into account factors including the age of a rating, whether the ratings are from verified purchasers, and factors that establish reviewer trustworthiness.
Top reviews

B-Movie Man
3.0 out of 5 stars Not the best
Reviewed in the United States on October 14, 2019
Verified Purchase
Pledge Night is a strange uncomfortable experience. The hazing of pledges, based on "true" hazing practices, are all super gross and hard to watch. You're cringing through it, it's so gross.

And then half-way through, the slasher plot unfolds, and that uncomfortable feeling turns into yawns. The killer really sucks at being a killer. His one-liners are painful and lazy. The killings are somewhat bloody. But the way it ends, and why it happened, it's so very thin.

It's a bad sign when the fun extras that Vinegar Syndrome adds to this release kind of turn me off because the movie is so bad. Don't get me wrong. I'm king cheesy. I love horror. I'd put Pledge Night in the lower middle of the pack of second rate slashers. But saying that, I'm a completist. I enjoyed some of the movie, so 3/5 feels right. Kudos to Vinegar Syndrome for giving this the five star treatment. The mileage of these kinds of movies for each fan will differ greatly.

The Movie Guy
1.0 out of 5 stars Dan is acting strange
Reviewed in the United States on October 23, 2019
Verified Purchase
Six young men pledge Phi Upsilon Nu (Phi U for short). During their hell/pledge week, a demonic form of a pledge from the past (Joey Belladonna -Anthrax) goes on a killing spree.

The film was "Roger Corman light." The jokes and gags didn't work outside of a juvenile level.

Russell STop Contributor: Star Wars
TOP 1000 REVIEWER
1.0 out of 5 stars I want my money back
Reviewed in the United States on October 21, 2019
Verified Purchase
I made it for 15 minutes of sheer torture on my nerve endings. Awful acting, awful direction and so cheap that it should not have been done. I love and support indie films but this gets no support from me. EVER. Was there a script....i doubt it and if there was whoever wrote it should be ashamed.
Read more
Helpful
Comment Report abuse

Russell Vangilder
5.0 out of 5 stars Might be considered cheesy or inappropriate by today's viewers but should still give it a go
Reviewed in the United States on March 22, 2020
Verified Purchase
A totally fun horror film that doesn't hold back
Read more
Helpful
Comment Report abuse