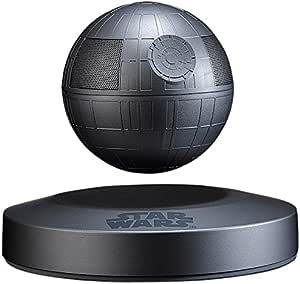 Brand: Plox
4.1 out of 5 stars 119 ratings
| 43 answered questions
Currently unavailable.
We don't know when or if this item will be back in stock.

Learn through play
Keep your kids engaged this holiday. Find learning and educational toys for all ages in science, technology, engineering and math genres. Shop now

Unbound from the laws of gravity, Plox brings the might of the Empire to your home with the Official Star Wars Levitating Death Star Speaker. Amaze your friends and yourself as your Death Star speaker delivers 360 degrees of uncompromising sound for up to five hours on a single charge.

The Death Star you've been waiting for

The Official Star Wars levitating Death Star is shooting off the big screen and into your home. Combining 360-degree sound projection with an out-of-this-world levitation system, this exclusive Star Wars collectible is the Death Star you've been waiting for.

The Death Star is a powerful, ultra-portable speaker that spins your favorite music

Publications from Disney Examiner to Engadget and X-Games ESPN all have seen the Official Star Wars Levitating Death Star speaker and think it's the next big thing. Get yours today.

Describe your product in 3 words.

As avid Star Wars fans and tech geeks, we're always looking for ways to combine our favorite passions. The levitating Death Star Speaker is designed for both tech lovers and Star Wars fans.

It's an officially licensed Star Wars Death Star that levitates!

What has been the best part of your startup experience?

Working with the teams at Disney and Star Wars to bring the levitating Death Star to life!

4.1 out of 5 stars
4.1 out of 5
119 global ratings
How are ratings calculated?
To calculate the overall star rating and percentage breakdown by star, we don’t use a simple average. Instead, our system considers things like how recent a review is and if the reviewer bought the item on Amazon. It also analyzes reviews to verify trustworthiness.

King Louie
5.0 out of 5 stars How to Make it Float (and review)
Reviewed in the United States on November 30, 2017
Before you smash the Death Star and leave a one-star review:

The base must be plugged in and turned on. Touch the center of the base; if it is not hot (warm is okay) then you are good to go. Use your hands, supporting the Death Star in case it gets pulled down to the magnets, to find the sticking point - which will be located right where it is in the stock picture - where the Death Star is hovering half-an-inch above the base directly in the center. When the Death Star feels like it isn't being pulled in any direction and feels stuck to the center, let go.

This shouldn't take more than 30 seconds. If it seems impossible, it's because it is! The base has gotten too hot and you need to turn it off (switch is near the power plug on the base) and let it cool off for 5-10 minutes.

With that out of the way, this thing is awesome! It is almost worth the price just to have a floating Death Star in your house! The bluetooth speaker aspect is sufficient to fill up a whole room with sound and the sound quality is what you would expect from a 5 Watt speaker - about as good as the speakers on a good monitor.

The speaker charges via micro USB and can be charged while floating. The Death Star is fairly difficult to knock loose once it is in it's levitation pocket.

I didn't want to waste too much electricity having this thing levitate at all times... So I measured the power output from the wall with a Kill-A-Watt meter. 1.7 Watts! Assuming 11 cents per kWh, that's 13 cents to float for a month! (It does use more while the Death Star is wobbling, interestingly enough. Up to about 6 Watts.)

That settles it: There is no better purchase than a floating Death Star speaker.

World Traveler
4.0 out of 5 stars Great "wow" factor, decent speaker
Reviewed in the United States on July 24, 2017
Verified Purchase
Added this to my Star Wars collection cause its a levitating Death Star after all, and the looks on my buddy's faces when they see it is worth every penny. Speaker is fine, and it is pretty cool to power it up and let it stream my Star Wars playlist as it rotates away.

Getting it to levitate can take some practice. The first three times I tried it landed with a thud on the base instead, but there's a plastic sleeve that helps guide it into place, and after a few tries you get the feel for it (a steady hand and bit of patience definitely helps). Overall, a cool product that does what it says with a pretty impressive wow factor.
Read more
128 people found this helpful
Helpful
Comment Report abuse

justin
3.0 out of 5 stars It’s a cool lil item
Reviewed in the United States on June 12, 2018
Verified Purchase
3.5 stars. It’s a cool lil item. Something new that nobody you know got. Comes in very sturdy box, thick cardboard like a iPhone box. 2 griped. It’s only 5 watts so you need to turn off everything that produces noise because this thing doesn’t go that loud. Also I was expecting it to levitate a lil bit higher, but it’s still a cool effect. I read a comment that it’s hard to get it to float, it only took me about 1 minute. I also read that you can knock it off easily, which I’m not experiencing. I mean I didn’t knock into it hard but I tapped the sides with finger and tap bounced the top a bunch and while it moved up and down it stayed on the pull of the magnet
Read more
10 people found this helpful
Helpful
Comment Report abuse

mememe
1.0 out of 5 stars Was supposed to be an awesome birthday gift.
Reviewed in the United States on April 26, 2018
Verified Purchase
Nice packaging, I paid $140 and the thing gets too hot and won’t work, I think it’s faulty. I got ripped off. Too bad I’m passed the return date. Very disappointed. 😔
Read more
9 people found this helpful
Helpful
Comment Report abuse

Michelle S Wright
5.0 out of 5 stars Star War Lovers' are going to Get a Kick out of this one!
Reviewed in the United States on January 12, 2018
Verified Purchase
My husband absolutely loves this item! It floats about 2-3 inches from the base but it does orbit around giving that awesome floating in space look. The bluetooth itself is extremely powerful and i can hear the music from two rooms over or even in the basement! He took it to work and everyone absolutely loves this thing! The fact that it actually levitates and orbits really amazes them. It does take some time to initially get the ball to levitate (it has detailed instructions on how to get the ball to levitate) but after you get the hang of it only takes 1-2 minutes to get it going! Definitely a gift to get for any Star Wars lover!
Read more
One person found this helpful
Helpful
Comment Report abuse

Tonya Hawkins
1.0 out of 5 stars Low quality speaker; nearly impossible to center over time.
Reviewed in the United States on March 20, 2018
Verified Purchase
I was able to center the deathstar fairly easily first the 2 times but after about a week of sitting it was impossible to center it again even after hours of trying. The speaker is of very low quality. Possible good enough for listening to an audiobook at a low volume but not for music for sure.
Read more
4 people found this helpful
Helpful
Comment Report abuse

ittysbittsy
5.0 out of 5 stars Good toy, decent speaker
Reviewed in the United States on February 9, 2018
Verified Purchase
Bought this for my husband for Christmas. He loves it. He doesn't even have to have music playing, he enjoys just watching it float (he's a bit of a physics nerd, so I knew what I was getting myself into).

Some reviews have mentioned that the sound isn't great, but we've found it to be at least as good as our other wifi speakers. And it has better sound quality than my husbands iSpeaker thing that he spent at least as much money on, and this way he doesn't have to attach his phone.
Read more
2 people found this helpful
Helpful
Comment Report abuse

John
3.0 out of 5 stars Speakers need a huge update
Reviewed in the United States on January 23, 2018
Verified Purchase
Well, the speakers on this thing are very very low quality. But the novelty of having a floating death star is pretty cool. I did buy a used one because I thought the full price was too much for what it's worth (I was right), so that might be the speaker issue there. But if you can get past the low quality speakers, it's a cool thing to have on your desk.
Read more
3 people found this helpful
Helpful
Comment Report abuse
See all reviews