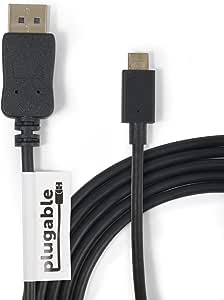 Visit the Plugable Store
4.4 out of 5 stars 734 ratings
| 123 answered questions
Amazon's Choice recommends highly rated and well-priced products.
Amazon's Choice for "plugable usb c to displayport adapter"
Available at a lower price from other sellers that may not offer free Prime shipping.

The Plugable USB-C to DisplayPort Adapter Cable enables a DisplayPort display to be connected to a computer via a USB-C port or Thunderbolt 3 port which supports “VESA DisplayPort Alternate Mode over USB-C" ("Alt Mode").

Alt Mode adapters allow you to add an additional display output easily and inexpensively on supported systems. Since DisplayPort Alternate Mode is a direct pipeline to the host graphics processor (GPU) in your system, the connected display will function with the same uncompromising performance of a natively attached display.

Video and photo editing, gaming, and other resource-intensive tasks are possible assuming that the system's GPU capabilities are sufficient for the application being used.

Audio is supported on DisplayPort capable TVs and monitors with built-in speakers.

Note: Apple has limited the 4K abilities of the 2016 and previous 12" MacBook to only support 30Hz.

Most current phones and tablets with USB-C ports do not support Alt Mode video output.

ASMedia USB 3.1 controllers do not support Alt Mode video at this time.

DisplayPort connector cannot be converted to HDMI, DVI, or VGA.

Our cable is not bi-directional and can only work with DisplayPort port displays.

Motherboards with dual USB-C/Thunderbolt 3 ports are limited to a single Alt Mode output; only one Alt Mode adapter supported per system.

Adapter is capable of passing Multi-Stream data. However, DisplayPort MST daisy chaining is dependent upon the host system, graphics drivers, and monitors being used.

Page 1 of 1 Start overPage 1 of 1
This shopping feature will continue to load items when the Enter key is pressed. In order to navigate out of this carousel please use your heading shortcut key to navigate to the next or previous heading.
Back
Next
Pages with related products. See and discover other items: dvi adapter to display port, 2016 chromebook, computer cables and connectors video, android tablet with hdmi, uhd laptop, usb c to a adapter