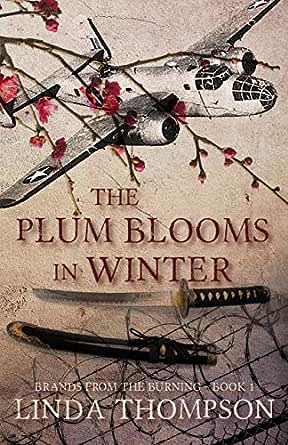 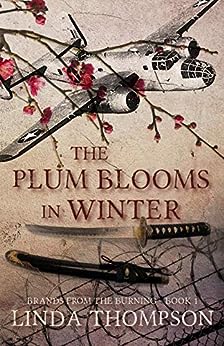 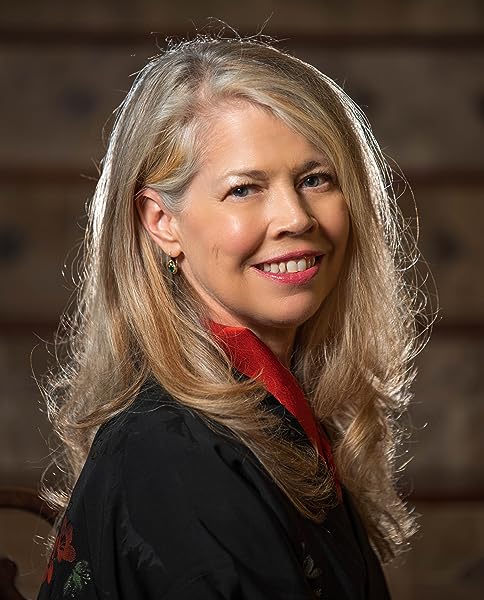 Linda Thompson stepped back from a corporate career that spanned continents to write what she loves-stories of unstoppable faith. Her debut novel, The Plum Blooms in Winter, is an O.C.W. Cascade Award winner and a finalist for several 2019 awards: Christy and Carol Awards, as well as the International Book Awards in two categories. Linda writes from the sun-drenched Arizona desert, where she lives with her husband, a third-generation airline pilot who doubles as her Chief Military Research Officer, two mostly-grown-up kids, and a small platoon of housecats. When Linda isn't writing, you'll find her rollerblading-yes, that does make her a throwback-taking in a majestic desert moonrise, or dreaming of an upcoming trip. She and her husband recently returned from tours of Israel, Jordan and Wales.

"Edgy, yet edifying, Thompson's debut is sure to leave its mark on you.... If you have time to squeeze in one more book before the New Year, let it be this one." -Amanda Geaney, Christian Shelf-Esteem

"The compelling and emotional story shows that, deep inside, our hearts all beat the same - no matter what our race or ethnicity - and that God's grace follows us into the deepest pit whether we've dug it ourselves or it's been dug for us." -Diversity Between the Pages

"If you are looking for fiction based in fact and you want to be challenged and changed, then this is the book for you." -Paula Shreckhise, Inkwell Inspirations

"Miyako's story was so full of twists and turns and surprises I never knew what to expect or even what to hope for her.... I am amazed that this masterpiece was written by a debut author. Keep your eyes on her." - Phyllis Werner Helton, Among the Reads

"Touched my heart in ways that are hard to express.... Gets the very rare very highly recommended rating! I definitely would recommend this book to anyone... but if you like WWII novels, The Plum Blooms in Winter should be in your library. It is a must-read!" - Beckie Burnham, By the Book --This text refers to the paperback edition.

4.7 out of 5 stars
4.7 out of 5
58 customer ratings
How does Amazon calculate star ratings?
Amazon calculates a product’s star ratings based on a machine learned model instead of a raw data average. The model takes into account factors including the age of a rating, whether the ratings are from verified purchasers, and factors that establish reviewer trustworthiness.

Shelf-Esteem
4.0 out of 5 stars A powerful story of forgiveness and redemption.
Reviewed in the United States on December 17, 2018
Verified Purchase
4.5/5 Stars

In The Plum Blooms in Winter, Linda Thompson portrays two human hearts rising out of the ashes of war. Prior to the bombing of Pearl Harbor, Dave Delham dreamed of flying and returning home to America as a hero. Halfway around the world, 14-year-old Miyako Matsuura was a young student and the daughter of a notable family. A sense of noble destiny "sang through her blood" and her family's honor was foremost in her thoughts. Their worlds and priorities would be upended on April 18th, 1942 when Delham and the crew of the Pensacola Payback B-25 unleashed its payload of bombs on Osaka, Japan and then ditched in Japanese occupied China.

As an American, veteran, and military spouse I was initially drawn in by my deference to those who wear the uniform. I love the patriotic spirit of the story and the bravery shown by the servicemen while in captivity, but I also cringed at the actions of some after the war concluded. Through Matsuura and her family, readers begin to understand the weight Japanese culture places on honor. I enjoyed the balance between sides, the author's crisp pacing, and the gradual unveiling of the gospel message. Edgy, yet edifying, Thompson's debut is sure to leave its mark on you.

Some may be apprehensive about the subject matter of this story.  If so, let me try to assuage your fears... For much of the book, Delham is a prisoner of war. He endures torture at the hand of his Japanese captors, with prisoner conditions echoing those chronicled in non-fiction history books. The author treads carefully with Matsuura's profession, giving it an air of authenticity without crossing the line into sensuality or salaciousness. Furthermore, these scenes demonstrate each character's depravity and that of their fellow man. By no means do I think Thompson has stepped beyond the bounds of what could be labeled Christian fiction. To the contrary, it was apparent to me she took great pains to be sensitive to her audience while delivering a powerful story of forgiveness and redemption.

The Plum Blooms in Winter highlighted for me the true battlefield for man—our hearts and minds. If you have time to squeeze in one more book before the New Year, let it be this one. If not, then you definitely need to add it to your list of books to read in 2019.
Read more

Sam McCormick
5.0 out of 5 stars “…a bruised reed he will not break” -Jesus
Reviewed in the United States on September 7, 2019
Verified Purchase
“…and a smoldering wick he will not quench, until he brings justice to victory.” So Jesus declares in Matthew 12:20, revealing an encouraging bedrock truth that lies at the heart of Linda Thompson’s inaugural entry in the publishing arena. The Plum Blooms in Winter is a stellar blend of fiction and not-widely-known historical events that followed the Japanese attack on Pearl Harbor, the U.S. Naval base near Honolulu. This novel about the convergence of two primary stories travels across three dimensions –time, culture, and faith.

In an impressive knowledge of the strategic, tactical, and emotional factors of warfare - and in particular World War II - Ms. Thompson presents a duo of complex characters whose differing cultures and conceptions of moral rectitude are in direct conflict, putting them on a treacherous course both individually and mutually. The bombing raid on Osaka that was a successful mission to Dave was a calamity to Miyako. But under this over-arching conflict, both Dave and Miyako were internally conflicted. Lacking the spiritual insight that a well-anchored faith engenders, their perceptions of right and wrong produce situations where nothing seems right, and the choice that is least wrong - bad though it is - seems best.

Those conflicts notwithstanding, both Miyako and Dave have certain strongly held ethical principles and are willing to die for what each believes to be right. For example, to enable herself to care for her father, Miyako followed what she saw as the least wrong course, fully recognizing that it involved the balancing of conflicting moral values, leading her into a shameful secret life in violation of a strongly held belief. If exposed, it would earn the disapprobation of those dearest on earth to her, and severe punishment from those who had some aspect of control over her. Still, weighing the two sides, she believed her actions more right than wrong. Miyako’s duty to care for Papa-san, her gravely ill father, overrides all other duties but one – a perceived duty borne of Miyako’s misbegotten notion of a higher obligation - vengeance.

As is always true in war, tragic loss and extreme suffering were experienced on both sides of the war. In The Plum Blooms in Winter, Ms. Thompson presents the pathos of bitter heartbreak so vividly the reader personally experiences the intense emotions the happenings in the story evoke.

Faith is introduced into the story in a natural flow, not preachy and doctrinaire or using unnatural and improbable dialogue. Trying to avoid a spoiler, I’ll simply say that both Dave and Miyako suffered egregious injustices at the hands of vile persons while on their converging paths, potentially leading to permanent loss of their freedom if not their lives. The lesson for Dave and Miyako is that freedom does not depend on being freed from prisons but can be built on the most fragile flicker of faith. Dave and Miyako demonstrate through separate avenues the divine truth that the feeblest smoldering wick of faith, when acted upon, produces a response on which a stronger faith may be built.

Use of Japanese words and expressions makes reading a little difficult for monolingual Anglos, but the meanings are usually apparent from the context, antecedent or subsequent dialogue and narrative. While I feel it appropriate to mention that for the sake of some readers who might find the use of foreign words and expressions off-putting, it doesn’t deter my overall 5-star rating.

In the vicissitudes of learning to live uprightly in a world filled with evil, both Dave and Miyako endured the depth of degradation, treated as though they were worth less than nothing. But how short the distance is from the deepest pit to the very throne of God, whose ears and heart are accessible to all who call on him!
Read more
2 people found this helpful
Helpful
Comment Report abuse

Jeanne C
5.0 out of 5 stars Amazing debut novel, riveting story!
Reviewed in the United States on November 17, 2019
Verified Purchase
Amazing debut novel, riveting story! I found myself turning pages late into the night and read this book in record time. Author Linda Tompson has done her homework. Her research and story-telling talents give us an amazing story and a vivid picture of the awful reality of war and it's aftermath. We encounter two separate characters each being in some type of prison and their long and harrowing journey as they endure unimaginable pain and suffering and question everything they know. Timeless story of war, pain, forgiveness and hope.
Favorite quote: "The poet said it best, perhaps. The plum is not the showiest of flowers, but when you see it's red blossom against the winter snow, you won't soon forget it. Beauty that thrives in adversity is of inestimable value, Matsuura-san. Always remember that." I highly recommend The Plum Blooms in Winter.
Read more
2 people found this helpful
Helpful
Comment Report abuse
See all reviews from the United States

Tazbeet
1.0 out of 5 stars Traumatizing descriptions
Reviewed in Canada on December 27, 2018
Verified Purchase
This may be based on a true story but it was too graphic for my christian heart and sensibilities. I had to stop reading at chapter 13, and should have stopped earlier. There is graphic descriptions of rape and torture and killings. Just too much traumatizing
Read more
Helpful
Sending feedback...
Thank you for your feedback.
Sorry, we failed to record your vote. Please try again
Report abuse