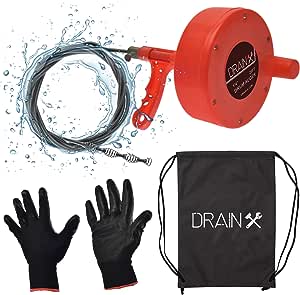 DrainX manufactures quality drain cleaning equipment for both do it your-selfers and professionals. Our main focus is innovation, quality and durability. We research and find the additional features our customers are looking for in their equipment, and diligently work to find a solution.

4.1 out of 5 stars
4.1 out of 5
1,076 global ratings
How are ratings calculated?
To calculate the overall star rating and percentage breakdown by star, we don’t use a simple average. Instead, our system considers things like how recent a review is and if the reviewer bought the item on Amazon. It also analyzes reviews to verify trustworthiness.

Vinny T
5.0 out of 5 stars Wow, it works!
Reviewed in the United States on February 25, 2019
Size: 15 FTVerified Purchase
I should start with a disclaimer: Augers are typically used by professionals, not because of their complexity or effectiveness, but because they can cause real damage to your pipes. For instance, I live in an old Brooklyn apartment built in who knows when, the kitchen drain pipe already eroded away naturally and had to be replaced, this tool sticks METAL down your pipes, so there is a definite possibility you can crack or break your pipes.

But, if you're as stubborn as I am and won't head even your own good advice, read on!

The wife moved in a few years ago, so in order to deal with the newfangled long hair down the drain problem, I attempted a few solutions. One being a drain catch, which worked well until we stopped using it (who wants to throw THAT away every two months?). Another was Draino, but I'm not a huge fan of pouring chemicals down the waterways, and I'd been warned that it's basically a hazard should the pipe have serious issues. So I kicked the can down the road.

Late last week, the tiny Brooklyn shower-stall started draining very slow. The water backed up to just under the three-inch lip, so I checked trusty Amazon for a cheap snake. I saw some promising new tech with microfibers or nanofibers or some sort of old-timey pipe cleaner my dad used to use when he smoked tobacco. While scrolling, this product popped up and I figured, hey why not waste $15 when I was planning on wasting only $5?

It arrived about 20 minutes ago. Instructions were on the back of the label, a little overly-simplified so basically ignored. I unscrewed the screw, yanked out the metal wire thingy and stuck it down the shower drain, remembering to be gentle on my ancient pipes. At first pass I got a tiny feather of hair at the tip of the metal. I shrugged at figured the backup fixed itself (this weekend the shower seemed to drain fine, so not quite magical thinking).

I decided to give it another go, gently reeled it down, spinning the little wheel thing a bit. I enjoyed the activity, pretending it was basically urban fishing. I pulled up just as gently as I had pushed down, and I felt a little suction forming at the bottom. Did I catch a nibble? OH DEAR GOD I DID!

What came out (and while I just had a couple fishing metaphors, this is not a Big Fish Story) I kid you not, was a glob of hair(?) literally the size of my wrist to my elbow. It literally looked like someone had dropped a sock down the drain. So, as disgusting as that might be, I am extraordinarily happy to have purchased this, may I never have to use it again.

For cleanup, I picked the bulk up in a plastic bag. I used my pug's doggy bags to pull apart the hairs still attached to the auger, and eventually just used a knife to cut the strands that had wrapped themselves around the metal. Rinsed everything off, and was done. All together, the job took about 25 minutes: a minute to unwrap and disregard the instructions, 4 minutes to make two attempts at fishing down my drain, a minute to call the wife in to show off my catch, 8 minutes to clean, and 11 minutes to write a raving review of this amazing product.

Alec W.
4.0 out of 5 stars Effective snake, but watch that it doesn't all go down the drain
Reviewed in the United States on August 12, 2018
Size: 25 FTVerified Purchase
I used the snake the other day to clean my drain. It seems to have done the trick, after many applications of chemicals failed. But in my effort to make sure the pipe was maximally clean, I kept pulling more and more snake out and then discovered that it was not anchored inside the plastic housing. I almost lost the whole thing down the drain, which would, I assume, have been a real pain to retrieve. So, snaker beware.
Read more
56 people found this helpful
Helpful
Report abuse

The Real McCoy
5.0 out of 5 stars Gone fishing! Catching a cliche' monster!
Reviewed in the United States on April 24, 2019
Size: 25 FTVerified Purchase
I got a whopper! Dont judge me, does it look like I have that much hair? First off, this is a shout out to all the folks that are not mechanically inclined in the least..I was asked to review this product, and normally, I would have taken the request with a grain of salt but I am very pleased with the outcome! I used it on my tub and had it draining in under 20 minutes; that includes gearing up (gloves and tool and bath prep), discovering the problem (finding the clog), fixing the problem (pulling up that trophy clog), and clean up (winding the tool back into place and putting things back).

Before you call a plumber, before you spend hours trying to plunge or manipulate a coat hanger, buy this product.

It comes with gloves, the tool itself, and it's own little bag. Great value for the price paid: a twenty spot and a 2 day wait was a bargain! Plus the satisfaction of actually being able to remedy the problem myself. This, folks, is the solution!

Easy to use, quick delivery, nice gear, courteous Customer Service (I'm assuming). Perhaps I just got lucky, but check the reviews and the rating...the proof is in the pudding!

Gared SparrowsonTop Contributor: Pets
4.0 out of 5 stars Fought the battle well
Reviewed in the United States on October 11, 2018
Size: 25 FTVerified Purchase
We just moved into this house my grandfather bought to spend his retirement in, and unfortunately the house came with all the charm of a cesspit. This includes major sewage problems that weren't disclosed upon buying, scary old carpets in the bathroom, and four thousands years worth of gross in every corner. This plumbing snake a bit of a life saver with our Kitchen Pipe Clog of Death and was able to pull out all the gunk from about 300AD. Without this, we'd have likely been using wire coat hangers and failing miserably. With this, we found the lost city of Atlantis, several entire dogs worth of hair, and a small amount of Plumber's Pride.
*My only warning, as many others have said, is that it's not attached anywhere inside the plastic casing so it will zip out of it and vanish into your pipe like so many hopes and dreams.
Read more
29 people found this helpful
Helpful
Report abuse

R
5.0 out of 5 stars This product really works!!
Reviewed in the United States on August 21, 2018
Size: 25 FTVerified Purchase
I ordered this product because my bathtub had been draining slowly for several weeks despite the use chemical agents that promises to clear any clogged drain. I received this product quickly thanks to amazon prime and found this product to be absolutely amazing; it helped me to remove a large clump of hair that was the culprit of the slow draining. The only downfall of this product is that there were no instructions provided; regardless of that I still rate it at 5 stars because once I figured out how to use it, which only took a few minutes, it was quite easy and effective. I also love the storage bag and gloves provided. I feel compelled to say that I usually never writes reviews but I was so impressed with this product that I had to share my thoughts once I received the email from the company.
Read more
16 people found this helpful
Helpful
Report abuse
See all reviews