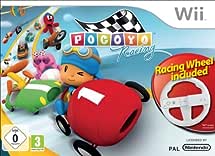 Brand: Nintendo
Platform : Nintendo Wii
3.0 out of 5 stars 12 ratings
Currently unavailable.
We don't know when or if this item will be back in stock.

3.0 out of 5 stars
3 out of 5
12 global ratings
How are ratings calculated?
To calculate the overall star rating and percentage breakdown by star, we don’t use a simple average. Instead, our system considers things like how recent a review is and if the reviewer bought the item on Amazon. It also analyzes reviews to verify trustworthiness.
Top reviews

Pen Name
1.0 out of 5 stars Pocoyo racing game
Reviewed in the United States on December 25, 2013
Verified Purchase
Very upset with this company because I specifically asked by email if the game came in English and if it worked in the U.S.A because it came from another country. Obviously they answered yes to all my questions, so I ordered it, but the Wii console doesn't recognize because it's from another region. Now my toddler is dissapointed and I'm very upset!
Read more
12 people found this helpful
Helpful
Comment Report abuse

rodney
1.0 out of 5 stars Only works on European Wii consoles.
Reviewed in the United States on December 25, 2013
Verified Purchase
This is possibly a good game if you live in Europe. Just be aware that this game does not work on Wii consoles that are released in North America.
Read more
12 people found this helpful
Helpful
Comment Report abuse

Grant Moyer
4.0 out of 5 stars This is a PAL game, but great for little ones if willing to hack your Wii
Reviewed in the United States on December 27, 2013
Like the other 2 users we received a PAL version of the game. I guess this game is not available in a NTSC version used in the US. I did not notice the PAL in the picture when we placed it on our wishlist. It also looks like PAL was added as a single description line, but I am confident that was not there in the past. My son was so excited to get it and then so disappointed that it would not work, I did some research. If you are willing to do it, you can "hack" the Wii and get this game to work. YouTube is where I found the most help to get me started. There are more complicated ways to do it, but I found that simply having something called Priiloader and using System Menu Hacks to enable Region Free Wii Games seems to work. Maybe it was some of the other things that were installed to get me to that point, but the game works and my son loves it. There is a Championship mode that has 3 types of races, so far. The first is a race against 11 other characters where you earn stars based on your finishing position and those stars accumulate until reaching a set amount, a timed solo race where you have to finish in a certain time based on the medal, and a solo race popping balloons where there is a goal amount for different medals. Winning a medal will unlock pictures. Video clips that tell a story are unlocked when you level up. There is a Party mode that allows Head-To-Head races in a split-screen with the concept being the loser would pass the remote to the next person. There is another game, I forget the name, that allows up to 4 people to race along with other characters (12 total). And boy does my son like changing characters. There are 12 characters to choose from including the main characters Pocoyo, Pato, and Elly plus Loula, Sleepy Bird, Fred, Baby Spider, Baby Caterpillar, and a host of Aliens (Angry, Orange, Circus, and Green). Each character has a choice of 2 "cars". It is all he has wanted to do. I took a star due to the PAL thing, but, again, if you can get it to work it is a lot of fun for young children.
Read more
12 people found this helpful
Helpful
Comment Report abuse
See all reviews

Kwkow
5.0 out of 5 stars Five Stars
Reviewed in the United Kingdom on October 5, 2014
Verified Purchase
My son loves it
Read more
Report abuse