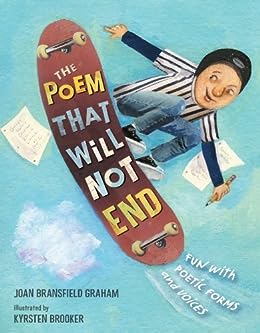 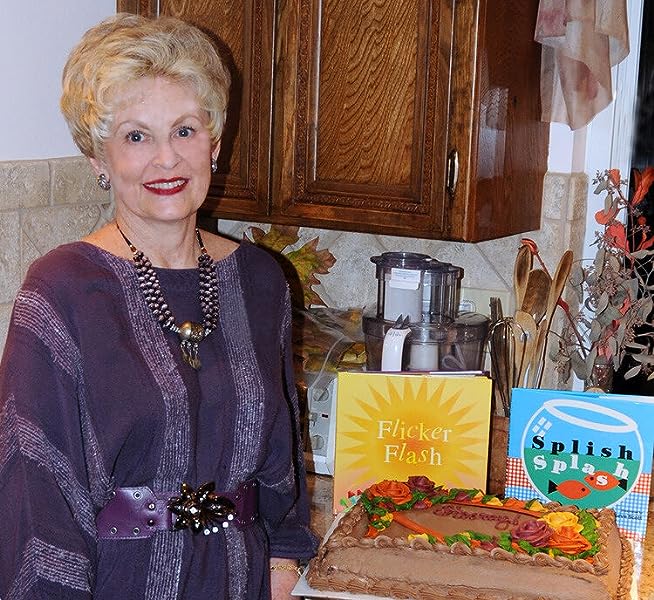 The Poem That Will Not End Kindle Edition 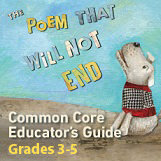 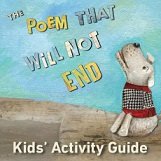 A Look Inside The Poem That Will Not End 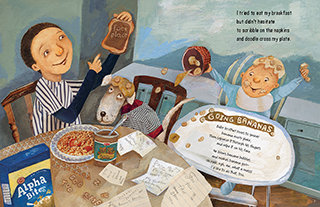 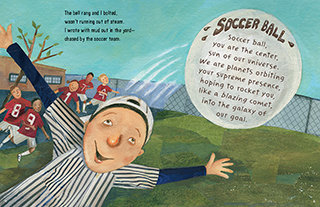 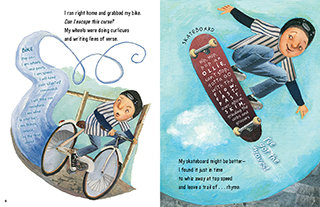 When a boy is "seized by a rhythmical beat," he extemporaneously crafts poems in response to the events of the day: "I tried to eat my breakfast/ but didn't hesitate/ to scribble on the napkins/ and doodle cross my plate." During a storm, he conducts a symphonic poem: "I play the wind, the thunder, and the sea!/ I am in charge, this power is intense—/ A world of rhythm that is huge, immense." With poems running amok in his mind all night, the boy is almost too exhausted to eke out another word during class: "I'm running out of steam—/ I've got to halt./ This inspiration spree has reached its end./ My fevered Brain Train screeches, brakes, and stops." Brooker's (When We Go Walking) stucco-like collages create cheerfully cluttered home and school environments. In notebook-style pages at the end of the story, Graham (Flicker Flash) introduces the basic poetic forms that the boy samples (including a sonnet, limerick, and villanelle) along with additional definitions, which may spur some readers to similar flights of verbal enthusiasm. —Publishers Weekly January 2014

“Graham’s poems are masterful, demonstrating remarkable dexterity with form and meter, while simultaneously conveying the gleeful abandon with which Ryan pursues his mission. . . . And they are complimented superbly by Kyrsten Booker’s lively collage and paint illustrations. In addition to being an exciting story about a boy who feels compelled to compose poems, Graham’s The Poem that Will Not End is also a terrific introduction to poetic forms and voices. . . . [B]elongs in every classroom and school library, and in the hands of every young reader who wants to know more about poetry.” —Kenn Nesbitt, Children’s Poet Laureate

"Full of energy and humor, this is an engaging introduction to the variety and expressive use of poetry.” —Booklist

"A picture book which may have language arts teachers doing a happy dance." —Julie Danielson, blogger Seven Things Before Breakfast

Ryan O’Brian has been hit with the poetry bug! At breakfast, on the playground, even in his dreams—he cannot stop scribbling limericks, haiku, free verse, and the like. Ryan’s subjects and writing materials are drawn from his everyday activities and environment. He uses french fries to spell out a funny couplet and composes a concrete poem to a soccer ball using mud. Action words and onomatopoeia keep the poems lively, until, exhausted by his poetic outpouring, he can only manage blank verse. Ryan’s appropriation of anything he gets his hands on to create poetry is mirrored by Brooker’s illustrations, which use collage elements layered on top of paint, pencil, and crayon, contributing to the book’s atmosphere of out-of-control creativity. Back matter includes “Ryan O’Brian’s Guide to Poetic Forms and a Note on Voice,” which defines each form Ryan used, with page-number references for each example. Full of energy and humor, this is an engaging introduction to the variety and expressive use of poetry. Grades K-3. --Paula Willey --This text refers to the hardcover edition.

Joan Bransfield Graham is an award-winning poet who can’t stop writing poetry. Her poems have been featured in anthologies, magazines, textbooks, and on CDs. Her books Splish Splash and Flicker Flash—shape poems about water and light—were both chosen as School Library Journal Best Books of the Year, and her poetry has been described as “ingenious,” “refreshing,” and “wonderfully evocative.” A former teacher, she lives near Los Angeles, California.

Kyrsten Brooker’s distinct, inventive illustrations have appeared in popular and award-winning picture books, such as When We Go Walking by Cari Best, Precious and the Boo Hag by Patricia C. McKissack, and Nothing Ever Happens on 90th Street by Roni Schotter, which J. Patrick Lewis praised in a New York Times review saying, “Kyrsten Brooker uses collages so adroitly and with such brio that you feel like reaching in and putting an arm around each of these elegantly drawn characters.” She lives with her family in Alberta, Canada.

Awards for THE POEM THAT WILL NOT END:

4.5 out of 5 stars
4.5 out of 5
132 global ratings
How are ratings calculated?
To calculate the overall star rating and percentage breakdown by star, we don’t use a simple average. Instead, our system considers things like how recent a review is and if the reviewer bought the item on Amazon. It also analyzes reviews to verify trustworthiness.
Top reviews

Sandra K. Stiles
5.0 out of 5 stars Great Way to Teach Poetry
Reviewed in the United States on July 28, 2020
Verified Purchase
This is the story of a young boy who can’t stop writing poetry. He writes it on shirts, in the shower, at recess, on the playground. He writes until the day his teacher asks him to write a poem about Spring. Then his mind goes blank. This book ends by talking about the different types of poems and voice. This would be great to use in any classroom as a mentor text.
Read more
Helpful
Report abuse

delie dell chua
5.0 out of 5 stars Great book to introduce poetry!
Reviewed in the United States on October 17, 2020
Verified Purchase
I got this book for free, i was not actually expecting much because it’s free. But, i was clearly wrong.

As an avid fan of poetry, i sure enjoyed this book! I highly recommend this book if you’re planning to introduce poetry to young learners. Different types of poetry in one book!
Read more
Helpful
Report abuse

bj
5.0 out of 5 stars All poems, all the time!
Reviewed in the United States on April 30, 2014
Verified Purchase
Clever, engaging book of poems, poems, poems! From the very first word to the last, this book travels through the day with energy and great fun. All from the point of view of a young boy who happens, no, is compelled to write...in verse! A delightful pursuit and education for all ages. Want to learn more? Visit the glossary at the back of the book for concise definition of terms.
Joan Bransfield Graham and her illustrator crafted a lovely book that readers will want to return to again and again. I thank the author of this book, I'll tuck it in my little...Kindle.
Read more
One person found this helpful
Helpful
Report abuse

Kalyente
5.0 out of 5 stars Fantastic and Fun Book!
Reviewed in the United States on May 1, 2020
Verified Purchase
Highly recommend this book for anyone interested in poetry. I learned some things myself as I read it to my daughter then we perused the terms at the back. Beautiful illustrations too!
Read more
Helpful
Report abuse

Christine Nichols
5.0 out of 5 stars What a wonderful way to introduce poetry!
Reviewed in the United States on April 29, 2014
Verified Purchase
Children and adults will enjoy this colorful and creative foray into poetic forms. I really enjoyed that it was wrapped in a story that was fun to follow.

One of my favorite parts was the addition of the glossary of poetic forms and other terms in writing at the back.

I can't wait to share it with friends and family alike.

What an imaginative way to make learning about writing fun.

Jeanette W
4.0 out of 5 stars Rhymes in parts
Reviewed in the United States on April 10, 2020
Verified Purchase
Clever and catchy for the most part but wordy and used vocabulary at times that my daughter lost interest before the end.
Read more
Helpful
Report abuse

slowsly
5.0 out of 5 stars Poetry Unlimited
Reviewed in the United States on April 28, 2017
Verified Purchase
Amazingly written poems winin a story! This book provides examples of every style of poetry. The back of the book explains each style. Children would love this. Great illustrations and a fun read.
Read more
Helpful
Report abuse

Carey
5.0 out of 5 stars Brilliant!
Reviewed in the United States on May 3, 2020
Verified Purchase
It is amazing how this book incorporates so many different types of poems and gives an explanation of each of them at the end. This is an excellent book to learn about poems. A great poem resource for teachers too!
Read more
Helpful
Report abuse
See all reviews

David Filce
5.0 out of 5 stars The Best Poetry Book Ever!
Reviewed in the United Kingdom on April 30, 2020
Verified Purchase
What a fantastic book to read with my grandchildren.

A magical story interspersed with different forms of poetry to learn.

Meera
5.0 out of 5 stars Poetic Teaching!
Reviewed in the United Kingdom on April 11, 2020
Verified Purchase
For those of you homeschooling this is a must. It is an amazing collection of many forms of poetry and poetic structure that will give you a comprehensive guide and examples to use. I am not a huge fan of poetry but this even had a few that I highly enjoyed.
Read more
Report abuse

Kindle Customer
5.0 out of 5 stars What a delightful book!
Reviewed in the United Kingdom on June 27, 2020
Verified Purchase
So clever, and so beautifully made, with such lovely illustrations, and genuinely good poems. What a good idea, to write poems about someone who can't stop writing.poems.
Read more
Report abuse

M R Mason
5.0 out of 5 stars The poem does end! ( I think )
Reviewed in the United Kingdom on April 4, 2020
Verified Purchase
Lots of poems,different types of them, are amazing in a great book. And this is a good book! But I'm confused, if this is called the poem that will not end, why did the poems end?( by Evalynn age 8)
Read more
Report abuse

Tko
5.0 out of 5 stars Smart and fun
Reviewed in Australia on April 3, 2020
Verified Purchase
Good storytelling, illustrations and great poems; including an accessible guide to different poetic conventions.
Recommended for all ages, even little ones.
Read more
Report abuse
See all reviews