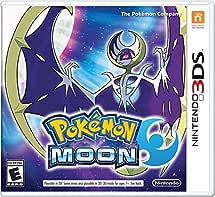 Visit the Nintendo Store
Platform : Nintendo 3DS |
Rated: Everyone
4.7 out of 5 stars 3,322 ratings
Available at a lower price from other sellers that may not offer free Prime shipping.
In Stock.
Arrives: Dec 2 - 4
Ships from and sold by DealTavern USA.
New & Used (92) from $17.78 + FREE Shipping

Buy this product as Renewed and save $6.04 off the current New price.

Pokemon Sun and Pokemon Moon will launch in the US November 18th, 2016 exclusively for the Nintendo 3DS family of systems. Embark on a new adventure as a Pokemon Trainer and catch, battle, and trade all-new Pokemon on the tropical islands of a new Region and become a Pokemon Champion!

4.7 out of 5 stars
4.7 out of 5
3,322 global ratings
How are ratings calculated?
To calculate the overall star rating and percentage breakdown by star, we don’t use a simple average. Instead, our system considers things like how recent a review is and if the reviewer bought the item on Amazon. It also analyzes reviews to verify trustworthiness.

Vincent
HALL OF FAMETOP 50 REVIEWERVINE VOICE
5.0 out of 5 stars Massive Change to the Pokemon Formula
Reviewed in the United States on November 18, 2016
Platform: Nintendo 3DSEdition: MoonVerified Purchase
Huge changes to the pokemon formula since Pokemon X & Y, no longer as it's strictly battle and collecting focused (although still present) as they added variety of mechanics to switch things up a bit and to bring more variety in gameplay. Changes include:

1. No HMs
No longer do you have to carry around a HM slave (s). This has bothered me in the past games as I have to restrict 1 or 2 slots out of my party of 6 to help traverse certain areas of the world. In the place of HMs there are Poké Rides where you can ride pokemon interacting with them on the world map, some you may not be able to access until you've completed mission within the game.

3. No Traditional Gyms
No longer do you have to battle your way through gym after gym to prove you're the best out of brute force.
There are 4 islands in the game, each of which are controlled by 4 Island Kahunas
To get to them you have to get pass Trail Captains and Todum Pokemon
Trail captain will give you quizzes, side quests to complete, and/or fight in traditional battles
Todum Pokemon. Basically typical pokemon you find the wild, but significantly stronger and have grunts that help them battle.

4. Rotom Pokédex
Typical pokedex, but with a face and personality attached to it.

5. Alola Forms
Basically different forms of pokemon you seen in previous generations. Either it's there physical form that is different and/or the pokemon's typing

6. Z-Moves
With a Z-Ring and a Z-Crystal you can use a pokemon's ultimate move once per battle. It's not like Mega Evolutions where it stays constant

7. QR Scanner.
You can now scan QR codes to get event pokemon

8. Battle Royal
A 4 player free-for-all where the battle ends after all of one's pokemon trainer's faints. They tally the win-losses of each trainer and the one with best stats at the end wins

9. Hyper Training.
Once a pokemon reaches level 100, they can go through hyper training which can improve a Pokemon's IV

10. Poké Pelago
Your PC Box now has functionality to it. It's like a day care sort of thing, instead of just depositing your pokemon, you can passively train them in the PC or have them search for items

11. Festival Plaza.
An online mode where you can battle other trainers and trade with them. You get festial coins for each interaction which you can spend on clothes, shop or upgrade your pokemon's stats. There's also missions you can undertake to get more coins.

12. Night and Day phase, New Pokemon
Pokemon Sun goes the traditional time route while Moon does the opposite. In Pokemon Moon if you're playing in the daytime, the game will consider it night time in-game. Some events also play out differently like different Totum Pokemon on the same island/trail
In traditional Pokemon fashion you can only get some pokemon in each version so trading is required either with a friend or if you own both versions. Also some pokemon evolve differently in each version now.
I'd say some of overall models of new pokemon are better looking than the last batch in previous iterations of the pokemon series.

13. Auto Run
Your run is as fast as a bike now, and it has unlimited use. You can now move in all directions instead of the traditional 4 and it feels very fluid

14. No Rod
Fishing is now dedicated to specific regions in the world. You cannot fish wherever you want anymore.

15. Photo Taking
You can now take Photos of pokemon in the wild.

16. Team Skull and Aether Foundation
Team Skull is the new antagonist group like Team Rocket, but they have a new style to them as they try act gangster-ish with their animated hand gesters/movements. They have more personality and have a darker tone to their backstory and mission.
Aether Foundation is the opposite of Team Skull as their mission is to cure injured and hurt pokemon. The group is also conducting research on the Ultra Beast (Pokemon) which is a good mystery story in and of itself.

17. Graphical Upgrade
Game looks better than the last, although there are some pixelation around the edges still. Models look more realistic than before, and the battle animations are more visually impressive. There are some framerate issues on 2v2 battles for some reason, but then again I own the launch 3DS. You may not have the issue if you own the New 3DS? It's a turn-based system so it doesn't really matter much in terms of gameplay, but the slow down is noticeable

-Returning mechanics:
Pokebank return, you can now transfer all your pokemon to Sun and Moon
Clothing Options: Although more options are available, it still feel very limited.
Mega Evolutions return, but none for new pokemon from what i've discovered

Overall, love the changes to the traditional formula as it gives the Pokemon Series a nice refresh and is more streamline to play.

krskiff
4.0 out of 5 stars Succeeds due to a massive amount of improvements to almost every aspect of the Pokemon games.
Reviewed in the United States on December 3, 2016
Platform: Nintendo 3DSEdition: MoonVerified Purchase
I was skeptical when I picked up this game. I am a veteran of all the Pokemon games, from Red and Blue onward. I was disappointed in the direction that X and Y took the franchise, but GameFreak has gotten back onto the right path with this game.

First: the gameplay changes. The gym challenge has been tossed and replaced with an island challenge, which combines traditional Pokemon battles with new mechanics that make each "Island Trial" unique. I won't spoil them here, but they were a breath of fresh air. Battles look great, the new battle screen has been redesigned for the better, and the movement is fluid.

Second: the graphics. This game looks amazing. It as good as any 3DS game I have ever seen, and better in many ways. The animations are beautiful, the islands are gorgeous, and the new Pokemon look awesome.

Third: the quality-of-life improvements. The PC in the Pokemon Center is easier than ever to use, the battle screen (as mentioned above) is the best it's ever been, the backpack is better, HMs have been replaced with a new Poke-Ride feature that does the same thing but doesn't take up your moveslots, and there are a lot more variety of Pokemon early on than I am used to. Seriously, you can find over half of the Pokemon types by the end of the second route!

Fourth: the story. This story is possibly (and probably) the best story of any Pokemon game to date. It's interesting, it flows well, it evokes emotional reactions in you, and it has several great surprises.

Things I didn't like: The beginning tutorial takes a couple of hours to get through. As someone who has played these games for a long time, I felt like my hand was being held far too often at the beginning. And the number of cutscenes in the beginning of the game is ridiculous. It gets much better after that, but still, the first couple hours are a slog. Also, this game does not run great on the older 3DS models. It suffers from semi-frequent slowdowns in-battle. Even on the New 3DS models, there are occasional slowdowns in battles. Also, a lot of the new Pokemon in the game are slower than I am used to, which makes battles against old Pokemon a little frustrating.

Overall, this is a worthy game to pick up. I had to knock off a star due to the game having some issues on older 3DS systems and the length of the beginning tutorial/cutscene spamfest. But other than that, it is an amazing game that I highly recommend to both fans of the series and anyone who wants to try out their first Pokemon game. It will not disappoint.
Read more
18 people found this helpful
Helpful
Comment Report abuse
See all reviews

Page 1 of 1 Start overPage 1 of 1
This shopping feature will continue to load items when the Enter key is pressed. In order to navigate out of this carousel please use your heading shortcut key to navigate to the next or previous heading.
Back
Next
Pages with related products. See and discover other items: ds all games, ds and 3ds game, enterprise ship, 3d ds games, battle pokemon, best ds games