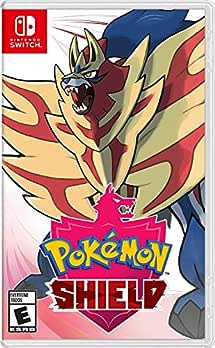 Share
Sell yours for a Gift Card
We'll buy it for up to $13.09
Learn More
Trade in now
Have one to sell?
Sell on Amazon

A new generation of Pokémon is coming to the Nintendo Switch system. Become a Pokémon Trainer, embark on a new journey in the new Galar region, and unravel the mystery behind the Legendary Pokémon Zacian and Zamazenta! Explore the Wild Area, a vast expanse of land where the player can freely control the camera. And participate in Max Raid Battles*** in which players will face off against gigantic and super-strong Pokémon known as Dynamax Pokémon. Begin your adventure by choosing one of three new partner Pokémon: Grookey, Scorbunny, or Sobble and encounter new and familiar Pokémon as you catch, battle, and trade. Players can control the camera and explore the vast areas around them in the Wild Area. Team up with other players locally or online in the new multiplayer co-op Max Raid Battles. Trainers who possess the special item Dynamax Band can Dynamax their own Pokémon. Get ready for the next Pokémon adventure in the Pokémon Sword and Pokémon Shield games. If you don’t already have a Nintendo Switch Online membership, you can try it out with a free 7-day trial. Don't worry if you already activated a previous free trial— an additional seven-day free trial is now available. Nintendo Switch Online membership and Nintendo Account required for online features. Free trial automatically converts to 1-month auto-renewing membership unless automatic renewal is turned off by the end of the free trial. Credit card/PayPal account required for 18+. Free trial cannot be redeemed by a Nintendo Account with an active Individual Membership or Family Membership. Not available in all countries. Internet access required for online features. Terms apply. *Additional games and systems may be required; sold separately. **Nintendo Switch Online membership (sold separately) and Nintendo Account required for online play. Not available in all countries. Internet access required for online features. Terms apply. *** An internet connection is required to receive the special Meowth.

FORGE A PATH TO GREATNESS!

Who will you choose? Grookey, Scorbunny, Sobble.

Dynamax is a phenomenon unique to specific locations in the Galar region, where Pokémon are able to take on gigantic appearances. Dynamax Pokémon become tremendously strong and their stats get a boost but they will return to normal after three turns.

Only certain species of Pokémon can Gigantamax—and even among such species, only rare specimens will be able to. Gigantamax Pokémon become bigger and it boosts the power of the Pokémon. It also allows each Gigantamax Pokémon to use a unique move known as a G-Max Move!

Pokémon Found in the Region

4.8 out of 5 stars
4.8 out of 5
12,811 global ratings
How are ratings calculated?
To calculate the overall star rating and percentage breakdown by star, we don’t use a simple average. Instead, our system considers things like how recent a review is and if the reviewer bought the item on Amazon. It also analyzes reviews to verify trustworthiness.

Ion
1.0 out of 5 stars The most disappointing Pokemon games in the franchise.
Reviewed in the United States on November 15, 2019
Platform: Nintendo SwitchEdition: Shield
Pokemon Sword/Shield are without a doubt the most disappointing Pokemon games in the series. While they manage to take a few steps forward to do some things right, the games have removed so much content that it's hard to suggest them to anyone, especially with a $60 price tag.

+ The Wild Area, while not perfect, is a step in the right direction. It's a big open area where you can catch Pokemon and freely rotate the camera. The graphics and performance are worse here than in other parts of the game, but I like the concept.

+ Mints! You can use mints to change the Nature on your Pokemon, which is very handy.

+ The graphics are very nice in some areas. While these aren't the best looking Switch games, there are some moments that I really appreciate playing a Pokemon game in HD.

- You have probably heard about this by now, but 60% of all Pokemon have been removed from the game. If you were hoping to import your favorite Pokemon, or go trade for your favorites, you probably can't. This is a HUGE disappointment.

- The Global Trade System (GTS) has inexplicably been REMOVED from the games. You now trade with people like in the Let's Go games, which is a huge step backwards. During my journey I usually like to use the GTS to obtain Pokemon not in my version, or maybe another starter. It is now close to impossible to trade for what you want unless you dig through online forums and websites to try and find someone to trade with you. It's terrible.

- There is almost ZERO post-game content. This has been getting worse and worse with each new Pokemon game, and it is by far the worst in Pokemon Sword and Shield. There is a mini story that takes 1-2 hours after you beat the game. After that, all you have are raids and the Battle Tower (which is a massive step down from the beloved Battle Frontier). There are no new areas to explore in the post-game, and very few legendaries to catch. Again, this is another massive disappointment.

- Mega Evolutions have been abandoned. The new battle technique is called "Dyanmax" where you make your Pokemon big for 3 turns. It doesn't feel satisfying and you can't use it very often. Mega Evolutions offered new looks for your Pokemon and felt like a better developed concept. The Dynamax concept feels rushed and not very fun to use.

- The game is very scripted and linear. It feels like every 10 minutes I'm getting interrupted by my friendly rival Hop to tell me where to go or what to do. I just want to play the game. I just want to explore. This is a RPG after all. The problem is that the routes in the game are the shortest they've ever been, and everything is very linear and straightforward. There is no challenge and no risk. The game tells you where to go and what to do, and then your friendly rival Hop always interrupts you every 10 minutes to tell you how great you are and then heals your Pokemon. It's very hand-holding.

- The game is $60. Previous Pokemon games on the handheld systems were $40. There is nothing here to justify the $20 increase in price. They actually removed so much content from these games, made a shorter main story, included very little in the post-game, and made the price more expensive than any other mainline Pokemon game.

Overall, I have to say that Pokemon Sword and Shield are easily the most disappointing games in the series. They do some things right that I appreciate, but they have just removed so much content. 60% of all Pokemon are gone. The Global Trade System was removed for no reason. The story and post-game are lacking. It's by far the most disappointing Pokemon game I've played, and at $60, I really can't recommend these games.

Sonny
1.0 out of 5 stars Well-deserved criticism
Reviewed in the United States on November 15, 2019
Platform: Nintendo SwitchEdition: Shield
Removed more than half the Pokedex, reused 3DS models, lazy graphics and animations relative to other Switch games, same formula, removal of a number of key competitive moves, and removal of other past features. You're better off getting your kid an older Pokemon game as this tends to only get decent reviews because it is in the Pokemon franchise.
Read more
174 people found this helpful
Helpful
Comment Report abuse

James
2.0 out of 5 stars If you've played the previous 2 generations you'll know what to expect.
Reviewed in the United States on November 15, 2019
Platform: Nintendo SwitchEdition: ShieldVerified Purchase
It's nothing special. It's OK. Fun for a little while, if a little dull. It's not the awful monstrosity that everyone is making it out to be but it's not a masterpiece by any stretch. I would would say it just barely manages to be mediocre. If half stars were a thing on here I would give it 2.5 stars. Probably shouldn't cost the full $60. This is more of a $45 game. I'd say it earns a firm last place in a ranking of all 8 generations. But hey, it's a Pokemon game. It's missable, but if you don't have anything better to do its probably worth a look.
Read more
130 people found this helpful
Helpful
Comment Report abuse

Metragoon
5.0 out of 5 stars This is an Evolution of Pokémon games.
Reviewed in the United States on November 16, 2019
Platform: Nintendo SwitchEdition: ShieldVerified Purchase
Pokémon Shield is exactly what I’ve been waiting for in a Pokémon game and Gamefreak did pretty well for a first true attempt. This game at its core is what we all have come to know about the series, but the presentation is much more streamlined this time. For those who don’t want to have their hand held on the tutorial, great news is you can choose to skip explanations and get right into the new story without any assistance. The gameplay is fantastic and the visuals if you actually take the time to look are quite impressive not only for a Pokémon game, but for a Nintendo Switch game in general. Dynamax is still a pretty awesome thing to see on screen and Max Raid Battles are the icing on the cake. I’d recommended this to fans of the series and people who enjoy turn based RPGs...