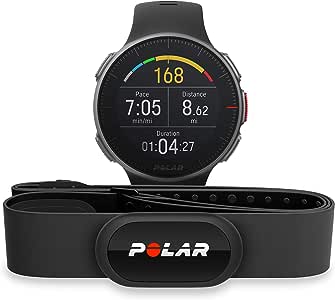 by POLAR
4.2 out of 5 stars 28 ratings
Available at a lower price from other sellers that may not offer free Prime shipping.

Track your workouts, analyze your progress and achieve more with Polar Flow - your complete training platform available on desktop and mobile.

Train smarter and discover the winner within yourself with Polar Vantage V, a premium multisport watch designed for pro athletes and for anyone who trains like a pro.

4.2 out of 5 stars
4.2 out of 5
28 customer ratings
How does Amazon calculate star ratings?
Amazon calculates a product’s star ratings based on a machine learned model instead of a raw data average. The model takes into account factors including the age of a rating, whether the ratings are from verified purchasers, and factors that establish reviewer trustworthiness.

Long time Polar fan, I ran my M400 into the ground, bought one for my significant other (who still uses it frequently) and thought it was an outstanding, all-around great product designed for multisport athletes. It got me through everything between 10-100K. When it finally died, I thought I'd splurge and I bought the M600 when it was first released. It brought me nothing but grief and is arguably the worst designed product ever. Crap battery, touch screen face (awful to use when sweaty, which is all the time in FL), the Android Wear interface is just clumsy, etc... Worst of all for an endurance athlete - unreliable.

Having had that experience, I was starting to have doubts about the updated Polar product lines, but didn't want to buy the V800 as it was missing some features I wanted like the wrist HR. I began to look at other companies until this came along.

Granted, the price jump was steep going from a $300 watch to a $550 watch, but I haven't regretted it for a moment. There are some techy folks out there who can do that stuff in much better detail, but here's what I love:

-Optical HR is accurate and great for about 90% of my runs. If I want to do some crazy interval stuff, the H10 HR monitor is a slick upgrade from their last and is used in other applications as well

- Orthostatic test is amazing. I started using it daily from day one and it's like it reads my body's mind. My training schedule doesn't always pair perfectly with it's advice, but it has helped me manage over training as I prepare for a 100 miler. Every morning I'm asked if I'm more sore than yesterday, more strained than yesterday and how well I slept. Just by asking the questions, I think it helps you to be more evaluative review of where you're at rather than just getting up and hammering out the next workout mindlessly.

- EASE OF USE - They moved away from the M600 nonsense (a return to buttons helped greatly with that) and navigation on the watch reminds me of my M400, just with more bells and whistles. Simple, intuitive and anyone familiar with Polar products will immediately be comfortable

-Wrist strap - no more of that garbage stretchy rubber they use, this band is much nicer, doesn't get stinky and while there's a little give, it feels and looks much nicer. Can also be replaced which is nice

- Charger improvement - while I'm still on the fence with Polar's magnetic charger, it is leaps and bounds better than the M600, which would barely stay attached. This one encompasses the entire back of the watch and the connection is much more reliable

-BATTERY LIFE - This is a game changer for Polar. I ran (x7) and worked out in the gym (x5) for over a week on a single charge. Even my M400 couldn't pull that off. Today's run was 1:07:00 ish and it only dropped the batter by about 4% overall, including the wrist HR and the sounds on. Amazingly, with slight settings tweaks, this will stay up and running for any ultra-marathon I throw at it

-Data/analytics - So much info, I think only pro athletes and trainers could use it all, but it sure is fun as hell to see it anyways. Polar added power from the wrist and the new Cardio Load report which is immensely helpful in understanding why I perform they way I do and how I can tweak my targets to meet my goals.

-Sleep stats - M600 also had this, but when you have to CONSTANTLY charge the damn thing, it's probably happening when you're sleeping. Not the case with this watch and I'm actually seeing an improvement in my sleep habits just from seeing what I've been up to. Even asks how well you

To be fair and balanced:

- No way to see the actual power level until plugged in, hope that comes in an update. Right now it only shows a battery icon with a bar which is meh

- Connection issues to PolarFlow continue to plague the connection to the computer, so I would recommend syncing by phone only

- Screens while working out can be added and modified, but it's a little clunky and I haven't really played with it much.

-Polar Flow is great, but if you're creating workouts for months in advance, the website is cumbersome. I'm getting used to the season planner features, but am not at a place yet where I would review.

All in, a huge leap for Polar, puts them in the higher-end Garmin or Suunto categories for serious athletes or those who take their training seriously. I would recommend without reservation.

LES
5.0 out of 5 stars Great training tool
Reviewed in the United States on November 16, 2018
Style: Pro (Includes H10 HRM Chest Strap)Color: BlackVerified Purchase
Upgraded from the Garmin forerunner to the Polar Vantage V. Went on my first run with the Vantage V and am glad I made the upgrade. No more need to wear a chest monitor to get accurate heart rate readings. The Vantage V heart rate readings were nearly identical to the chest monitor readings. When I first started running the heart rate was a little higher than the chest monitor, but after a couple minutes the readings were nearly identical. The screen is easy to read while running and after the run the amount of recorded the data that the watch collects is amazing. Data recorded includes cadence, average power, total power, average heart rate, heart rate zones, pace, time spent at different paces, laps, total altitude climbed. The data is very easy to scroll through on the watch after the workout and even has charts. So far my favorite functions are the heart rate with no chest monitor and lap counting while swimming.
Read more
10 people found this helpful
Helpful
Comment Report abuse

Buyer A
1.0 out of 5 stars Don’t waste your money!!!
Reviewed in the United States on February 12, 2019
Style: Pro (Includes H10 HRM Chest Strap)Color: BlackVerified Purchase
When you pay this much money for a HR monitor, is should look and work perfectly! I tried 12 times to sync, would start then 10-15 minutes later would drop the connection. Finally, after an hour, the sync with my iPhone finally finished! Future data syncs were slow or would drop! Watch face is very dim and difficult to read, nothing like the product photos!!!
Read more
8 people found this helpful
Helpful
Comment Report abuse

M Chase
1.0 out of 5 stars Better cat toy than HR monitor
Reviewed in the United States on January 20, 2020
Style: Pro (Includes H10 HRM Chest Strap)Color: BlackVerified Purchase
I have had this for a while now. In the last 6 months it fails to read my heart rate correctly, even with the H10. It consistantly disconnects from it and decides to use the sub par optical watch sensors. The watch has to be in contact with the H10 to work.

I have factory reset everything several times and nothing seems to fix it. For $500 this is better as a cat toy than an HR monitor. As you see on the screenshots. My phone is better at it....
Read more

Maggie
5.0 out of 5 stars Hard to switch to but once you have it then it's great
Reviewed in the United States on July 1, 2019
Style: Pro (Includes H10 HRM Chest Strap)Color: BlackVerified Purchase
My professional triathlete friend recommended this watch to me. I had Garmin for the longest time and switching away is like switching from Android to Apple or vice versa. It really frustrated me the first two weeks but once I got the hang of it I just love it. I would recommend this watch to anybody who has goals in their endurance sports and wants to track their progress...best I've ever used.
Read more
3 people found this helpful
Helpful
Comment Report abuse

Renato Remak
1.0 out of 5 stars Very dim display. No way to adjust. Very disappointed!!!
Reviewed in the United States on October 31, 2018
Style: Pro (Includes H10 HRM Chest Strap)Color: Black
I was very excited to receive my new Vantage V watch today, until I turned on the watch and noticed that the display for the watch was very dim. I assumed that this was a setting that I could easily adjust in the settings for the watch. To my dismay there is no settings that allows for the adjustment of the brightness of the display. Now I have a new watch, that I can barely read. When inside I need to press the light button just to barely read the display. I have sent an email to Polar and see what/how fast they can fix or replace this issue. I am very disappointed with the display and I am now thinking that I should have waited for the bugs to be fixed before buying. Hopefully this can be resolved quickly. I will report back once I hear back from Polar.
Read more
33 people found this helpful
Helpful
Comment Report abuse

The Vantage V now offers a touchscreen and adds and Altimeter. The new wrist-based power by Power is a cool feature that translates in multisport. It now has 9 LEDs on the wrist-based heart rate is the most accurate that I have used. With 1 sec intervals of recording the battery life of the long days of training and racing.

The new sleek look to this watch allows me to wear this all the time and doesn't feel as bulky during the performance.
Read more
2 people found this helpful
Helpful
Comment Report abuse