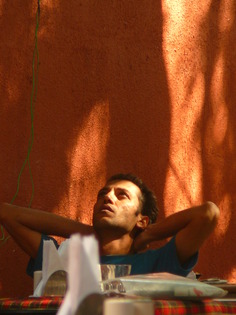 "One With The Universe- Contemplative and simple,Ponder Awhile  is not just a composition of some 66 poems but an experience which will leave you with your thoughts alone."
Pune Newsline- The Indian Express
"This youngish poet has scored very well in categories of Spirituality, Philosophy and Poetry on listing of writing constantly updated on the world wide web. He has even inched passed Charles Taylor for a well known work A Secular Age. Surprisingly Kabir, Rabindranath Tagore, Gibran, Shakespare and several other literary luminaries have been left in the shade too."
Pune Mirror
"Stimulating and mesmerizing, yet simple and pure they will leave you wanting to embrace the simple joys and truths of bare existence."
DNA News
"We are sure that this is one poet that the city of Pune can call its very own Shakespeare!"
Eastside Plus -Times Of India

An extraordinary struggle of an atheist youngster who came from a surprisingly religious background, maternal grandfather being a Parsi priest in a Mumbai fire temple and paternal family, Brahmins from the alluringly spiritual Hindu city on the banks of the Ganges, Allahabad. Became a sailor and one day, in the middle of Atlantic Ocean, divinity struck upon him and grew when he received signs to write poetry. He started writing at the age of 30 and has finally, brought out a winning poetry edition which he has nurtured and polished over a decade.

Start reading Ponder Awhile on your Kindle in under a minute.

Sanjay Sanyal
5.0 out of 5 stars Great Book
Reviewed in the United States on March 7, 2014
Verified Purchase
Very thoughtful of the writer. Big transition in life from Navy to becoming a poet. Must have this book in your collection.
Read more
Helpful
Comment Report abuse

Jainettdennis
5.0 out of 5 stars BEST BOOK EVER
Reviewed in the United States on December 9, 2013
Verified Purchase
Awesome Poetry This Book Gives Me Slot Of Courage And Gives Me Advice For Different Problems I Absolutely Love This Book
Read more
One person found this helpful
Helpful
Comment Report abuse

Todd A Fonseca
VINE VOICE
3.0 out of 5 stars Enlightened Sailor Turned Poet
Reviewed in the United States on June 6, 2009
In 2003, while sailing in the Atlantic ocean, merchant sailor Mohit Misra had a moment of enlightenment. So much so, the previously confirmed atheist gave up his career to begin writing and convey his thoughts through couplets/dohas. The result is a collection of poems found in Ponder Awhile.

Honestly, poetry is not my typical reading genre; readers of this review should keep that in mind. I found some of Mohit's offerings did cause me to ponder awhile. Those dealing with religion, governments, and being one people without prejudice were the more powerful offerings. To me poetry, like any good novel, movie, or art, causes one to reflect, take notice and delve a little deeper into the human condition. A few of these poems did just that for me.

The remainder of the book is filled with some other creative though simple poems of everyday life which did not stay with me as much. The poems about women seemed somewhat superficial but perhaps this was purposely done by the author to convey the emotions and reactions he was having were also superficial yet powerful, consuming, fleeting, and sometimes confusing.

Overall, an eclectic selection of poems.

Madhavi S. Ghare
4.0 out of 5 stars Ponder Awhile
Reviewed in the United States on February 23, 2007
These poems do make you stop and ponder...Mohit has written from the heart, and his poetry reflects that. He uses the medium of rhyme to convey his deepest experiences of life, and beyond.

These poems do help you see the world from his eyes, and make you think.

Keep it up! and All the Best!
Read more
Helpful
Comment Report abuse

Vishal Lamba
5.0 out of 5 stars a masterpiece one must have
Reviewed in the United States on February 22, 2007
Mohit has composed a collection of very lovely poems, with a lot of deep insights written in uncomplicated simple words. When Mohit first approached me to design his website - I was delighted... and at the same time my experience told me that it will be very challenging and difficult for Mohit to sell poetry online. However, Mohit has been persistent and driven to make this a success - and I request all book lovers, readers and poets to support and encourage Mohit by purchasing his book of lovely poems. The poems can be read and enjoyed over and over again. This is a book you will truly cherish to have as part of your collection.
Read more
One person found this helpful
Helpful
Comment Report abuse

M. N. Kavarana
5.0 out of 5 stars ponder awhile
Reviewed in the United States on October 26, 2006
This collection of poems stimulates deep thought about life, death and religion. Unlike many other spiritual texts the author and his writing do not attempt to impose his views upon others, but they make subtle suggestions about day to day follies and misunderstandings about god and religion. This is a book for anyone seeking for a deeper meaning of our existance and at the same time is fun to read. Mohit through his poems truly demonstrates his love and respect for people and life and most of all god. This book may be way ahead of our times for some but will reach out to many.
Read more
Helpful
Comment Report abuse

natasha teja
5.0 out of 5 stars Excellent poems
Reviewed in the United States on October 26, 2014
I have read the poems. They are awesome. I can totally relate to all of them as I feel the same. I am a total believer in God and I totally feel if you have the faith and conviction God will definately help you .

Peter Boaz Jones
5.0 out of 5 stars A Brilliant Spiritual Work
Reviewed in the United States on October 10, 2006
Some of the most poignant prose I have come across, in relating to all aspects of religion and spirituality through harmony and unity of purpose. Mohit, crystallises all the main themes of life and its transition into beautiful and simple language, giving the reader a basis for considering these moving criteria easily and thoughtfully. Really it is a very useful tool, when trying to understand these deep and often seemingly complex questions.
Read more
3 people found this helpful
Helpful
Comment Report abuse
See all reviews

JOHN 'JT' ROBERTS
5.0 out of 5 stars Ponder Awhile
Reviewed in the United Kingdom on April 18, 2014
Verified Purchase
I enjoyed the leisurely read and found myself relaxed, calm and ready to face the trials and tribulations of life in a much more effective way.