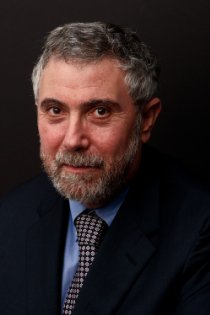 Conventional wisdom holds that foreign competition endangers U.S. jobs, that Americans must learn to compete in an ever-tougher global marketplace and that we can do so only by forging a partnership between government and business. But in Krugman's dissenting view, this consensus is nonsense?"pop internationalism," a set of misleading cliches reinforced by economists and pundits such as Lester Thurow, Robert Reich, Clyde Prestowitz and James Fallows. In these stimulating, maverick essays, reprinted from Foreign Affairs, Scientific American, Harvard Business Review and elsewhere, Stanford economics professor Krugman (The Age of Diminished Expectations) argues that the growth of Americans' real income has slowed almost entirely for domestic reasons. He also defends the North American Free Trade Agreement (NAFTA), deflates the myth of Asia's miraculous economic boom and warns that our obsession with competitiveness distorts U.S. economic policy by encouraging protectionism and trade wars.
Copyright 1996 Reed Business Information, Inc.

On the evidence of the lively collection of essays at hand, there's nothing dismal about the social science practiced by Stanford University professor Krugman (Peddling Prosperity, 1994, etc.). In a baker's dozen pieces (previously published in Foreign Affairs, Harvard Business Review, and other blue-chip journals), the author gleefully corrects what he construes as major errors corrupting public discourse on the economics of international trade. Using statistical data readily available from US government agencies, Krugman dismisses as ``a dangerous obsession'' the widely accepted notion that countries (like corporations) are in win-lose competition with one another. He goes on to make a persuasive case for the proposition that domestic productivity is the key determinant of growth in employment and living standards throughout a world that is appreciably less interdependent than commonly believed. Among other unfortunate consequences, the author argues, the simplistic doctrine of global rivalry has the power to cloud the minds of appointive and elected officials, who may use it to misallocate resources, impose trade restrictions, or commit other policy blunders. While he characterizes the export/import game's stakes as relatively small, Krugman is at frequent pains to support, if not advance, the free-trade cause. In aid of this objective, he takes on some influential high-profile peers (Paul Kennedy, Edward Luttwak, Robert Reich, et al.) and documents precisely how their anecdotal evidence and figures fail to add up. Covered in equally iconoclastic fashion are NAFTA (a political rather than a commercial alliance, in the author's convincing opinion), the unsustainable gains logged for Asia's newly industrializing nations, and the reality that technology has a greater impact on job rates than trade. An informed and informative audit of the all-too-conventional wisdom that, as per Gresham's law, can drive common sense from the marketplace of ideas. -- Copyright ©1996, Kirkus Associates, LP. All rights reserved.

Paul Krugman is Professor of Economics at Stanford University.
Read more
Tell the Publisher!
I'd like to read this book on Kindle

Tot1
2.0 out of 5 stars On one hand FIVE stars, on the other... Only two.
Reviewed in the United States on August 21, 2011
Verified Purchase
Much like Sour Punch candy, the collection of essays had me winching against the sour, then settling into a disturbed, sweet appreciation. Clearly Krugman was not a Reagan fan. Clearly he was not a fan of the Clinton Economic Team. Clearly he was not a fan of most of the popular economic thought of the 80s or 90s - he freely disses Thurow and Reich and only gives a "C" to Laura Tyson.

The best essay is Technology's Revenge which was published in 1994. A key idea is income inequality as "fractal" (p. 199) with wide ranges inside of a profession.Sherwin Rosen proposed this "superstar" hypothesis, a likely precursor to the "personal branding" that is all the rage in 2011. Competency gains little reward, superstars will reap the lion's share. Krugman uses this point to lever the pursuit of higher education above luxury and into necessity. (p 201). Then he states that technology will allow the less skilled to be productive. The lawyer, the accountant and the skilled professional will be replaced by technology, while the average service provider (janitors, plumbers, etc.) will persist.

Dear Lord, there is plenty of demand, but no supply, for a one-handed economist.

Economists seem to have a hard time with adjectives. Small, large, slow, fast, consequential, inconsequential, all littered through-out the work, and all undefined and unqualified, the same criticism the Krugman levels at others.

Miracles like Russian and Asia (Malaysia, China and India) are reverse-transubstantiated back to water. Massive injections of human resources are one time gains that can raise and economy out of poverty. However, once that gain is captured it is unclear what the next steps are to continue development. The current push for more "education" as a solution for US economic ills would seen to be undermined by the history provided and by the theoretical argument from Technology's Revenge. In a similar vein, Perry and the Texas miracle will be vivisected.

The sweetness of Pop Internationalism is much less satisfying. I can resell the book on Amazon and recapture some of my capital "investment". Usually a book of this sweep would garner a place on my bookshelf as a reference. But Krugman so expertly dissects everyone in the room, that there is no further reading required.
Read more
3 people found this helpful
Helpful
Report abuse

Charles Hooper
5.0 out of 5 stars Krugman at his best
Reviewed in the United States on December 2, 2013
Verified Purchase
Paul Krugman at his clear thinking, pro-free trade best. After being turned off by a number of his recent New York Times articles, I was frankly surprised by how good this book is. This book is, above all else, proof that economists have valuable and universal insights.
Read more
One person found this helpful
Helpful
Report abuse

Carl A. Redman
4.0 out of 5 stars Good, concise, but sometimes repetitive
Reviewed in the United States on December 16, 2001
I am no expert on economics, having only taken basic classes in college, but Paul Krugman SEEMS right in his book "Pop Internationalism." Krugman, the op-ed columnist for the New York Times and Slate magazine and also a professor at Princeton University, published this collection of essays, articles, and speeches back in 1996.
Perhaps the publishing date brings about the only weakness, as much of the talk seems less appropriate for today's economy. But the reviews of old topics like NAFTA and the Eastern economy is still good information, and presented clearly and concisely.
Krugman put this collection together to inform people of the latest trend of beliefs in international economics, a trend that is dead wrong in Krugman's eyes. And so we have his term of "pop internationalism."
The basic idea of pop internatiolism is that the U.S. does not depend on international trade as much as the "experts" portray. Very little of our GNP is actually in exports, and we are seemingly doing just fine as the world market becomes more "global." Krugman is so concise in this point that many of the essays actually repeat the point over and over. This is okay though (at least for me), because I understood it better reading it again.
The book is a quick read, and is divided into four secions: A Zero-Sum World, Economic Theory -- Good and Bad, The Emerging World, and Technology and Society.
As far as Krugman being correct in his economic thinking, get back to me after I read some of the "pop internaitionalism" literature from the likes of Reich and Thurow.
Read more
15 people found this helpful
Helpful
Report abuse
See all reviews

Claus Eisgruber
5.0 out of 5 stars Removing the myth of competition between countries
Reviewed in Germany on February 21, 2008
Verified Purchase
Excellent essays on economics and mainly trade issues. I really admire the essay "Competitiveness a dangerous obsession". It is fascinating how Mr. Krugman detects fundamental flaws in the way how most of us think about the impact of international trade on employment, wages and public welfare. His reasoning is sound and based on well established economic theory.
Read more
Report abuse
See all reviews
Pages with related products. See and discover other items: export trade company
Back to top
Get to Know Us
Make Money with Us
Amazon Payment Products
Let Us Help You
EnglishChoose a language for shopping. United StatesChoose a country/region for shopping.
© 1996-2021, Amazon.com, Inc. or its affiliates