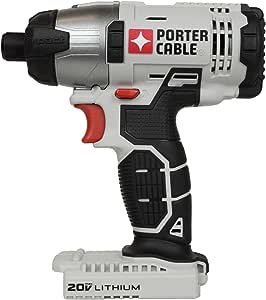 by PORTER-CABLE
4.6 out of 5 stars 253 ratings
Currently unavailable.
We don't know when or if this item will be back in stock.

4.6 out of 5 stars
4.6 out of 5
253 customer ratings
How does Amazon calculate star ratings?
Amazon calculates a product’s star ratings based on a machine learned model instead of a raw data average. The model takes into account factors including the age of a rating, whether the ratings are from verified purchasers, and factors that establish reviewer trustworthiness.
Top Reviews

Sam Gamble
5.0 out of 5 stars Doctor Doctor, Give me the news!!!! I've got a bad case for "IMPACTING" you !!!!!!!!!
Reviewed in the United States on May 25, 2016
Verified Purchase
After having purchased ALL the porter cable 20v MAX lithium tools, and having used them from a range to very demanding, to extremely simple tasks, which involves routinely using them well past their intended run times and overall stress tolerances, I feel I can now make a justified review, based on their performances over the course of roughly a year.

The Porter Cable PCC641 20V MAX Impact driver is an extremely well made, and useful tool. It is technically the cheaper impact in their line, the PCC640 being the more higher end tool. The differences between the tools are on a very short list. The PCC641 is slightly longer than the PCC640 but really only by about 3/4". The PCC641 also has a slightly different handle feel than the PCC640, however this seems to be a reaccuring trend in all Porter Cables tools, the more expensive one always seems to be slightly different feeling.

The cheaper PCC641 also has only one magnetic strip on top to hold bits, where as the PCC640 has two, one on each side. This feature, or lack there of really didn't matter to me as I removed the magnets because they would get crudded up with metal shavings from my shop. After taking apart both Impacts the motors, drive mechanisms and bearings all look nearly identical. The impact gear box on the PCC640 is slightly shorter however, which attributes to the tools 3/4" difference in length. The tools appear to me however to have identical rates, and strength of impact, so the size is just a convenience factor (fitting it in tighter spaces). I will admit I haven't used the PCC641 much as I prefer the smaller PCC640, however since they have the same internals I feel as though I can speak for it.

I have used the impact for meaning projects, just some of which include, Installing new cabinets and studs for them, mechanic work including V6 Engine head gasket, Water Pump (X2), removing the dash, seats and wiring harness from a pickup to replace the heater core, building an addition on our house, building many shelves, hanging sheet rock, installing ceiling joists, driving 4" screws into studs, driving 6" long by 1/2" lag bolts and much more!! During all this the tool never acted up, never even stripped a fastener!!

The trigger (on this and all variable speed tools in the lineup) is the perfect combination of sensitive and responsive. When I first used the tool I had a difficult time getting used to "feathering" the speed as to not drive the fastener too far, but after a few days I can now drive screws into sheet rock without going in too far, a sometimes overlooked but very useful feature. The tool also features a fairly bright LED that illuminates the work area when the trigger is pulled. The impact feature itself is also nice, I was actually always against impact drivers in the past due to my lack of experience, now I'm sold though, its a much better way to drive fasteners.

Overall, the Porter Cable PCC641 is a great alternative to the higher end PCC640, which has essentially the same features, just in a minutely larger size. Unless you want to spring for the Kit that includes the higher end drill and Impact (PCC600 & PCC640), I say this is a great impact that will serve you very well for all sorts of jobs.

Troy G
5.0 out of 5 stars Very fast and plenty of power.
Reviewed in the United States on March 20, 2020
Verified Purchase
Added this to my collection of Porter Cable power tools. I already had three batteries so I got the bare bones version. I've been using a Bostich 20 volt for a couple years now and love it. Figured I'd get this one as a companion since I could save money not having to buy a battery. My first impression is good but the trigger is way more sensitive than the Bostich. Other than that I love it. It just takes a little getting used to. It seems like the gearing may be a little faster on the PC. I have to be careful with the trigger and the speed combined can equal stripped screw heads. Just a matter of what I'm use to though. Love the impact
Read more
Helpful
Comment Report abuse

Flying Chrysler
4.0 out of 5 stars Great little impact driver
Reviewed in the United States on August 1, 2019
Verified Purchase
I got this impact driver as part of a larger set of Porter Cable power tools as a gift. I used these tools a lot when purchased a new (to me) home that we did a lot of work to before we moved in. This impact driver has served us well, I really do not have anything bad to say about it. It's pretty ergonomic and comfortable and does not have any trouble driving in stubborn screws or bolts (or removing them). I actually got a family member one as a gift before he started building a new deck.
Read more
One person found this helpful
Helpful
Comment Report abuse

Lee R
5.0 out of 5 stars Great Small Driver, If Needed
Reviewed in the United States on June 5, 2020
Verified Purchase
I have the entire line of the P+C 20V tools and have been more than pleased with all of them. This is a small impact driver that I use if the drill isn't going to cut it. It's sort of a specialty tool in that sense; any big effort requires a bigger tool. It seems that they only offer this as a combo package with the drill, and I had to get this from someone that had split up the set. Anyway, it has plenty of punch and spunk for a small driver. If you're driving a bunch of small/medium bolts, this is a 5 star unit. Otherwise, it may be too specialized for most.
Read more
Helpful
Comment Report abuse

Cameron A.
5.0 out of 5 stars Great product for DIY projects
Reviewed in the United States on November 5, 2019
Verified Purchase
I have limited experience with power tops but this met my expectations and is capable of all of the DIY projects around our house. I did a lot of research when looking for brands and finally decided on porter cable. There are cheaper and more expensive options and they have more availability for replacement pieces or add ons but I am happy with my purchase! If I could go back I’d do it the same.
Read more
One person found this helpful
Helpful
Comment Report abuse

Garrett Mefford
5.0 out of 5 stars Doesn't Need to be Yellow to be Good
Reviewed in the United States on February 7, 2020
Verified Purchase
Great impact for the price. I have used dewalt and milwaukee impacts along side this porter cable and the differences are minuscule. I will say, this is my second porter cable impact. The first lasted me two years of very rough use almost daily. Many drops from the holster as well as ladders. For the price and abuse it can withstand, you cannot go wrong with this impact driver.
Read more
One person found this helpful
Helpful
Comment Report abuse
See all reviews from the United States