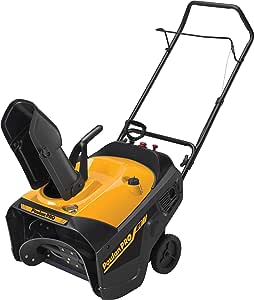 The Poulan Pro PR521ES single stage snow thrower is easy to maneuver and features a 136cc LCT engine and electric start. The PR521ES has a 21-inch clearing width and 13-inch intake height that is ideal for clearing sidewalks and driveways in areas with light snow accumulation. For any further queries please contact ACER’sPoulan Pro Technical Support Number/ Customer Support Number @ 1800-238-9333

3.4 out of 5 stars
3.4 out of 5
133 customer ratings
How does Amazon calculate star ratings?
Amazon calculates a product’s star ratings based on a machine learned model instead of a raw data average. The model takes into account factors including the age of a rating, whether the ratings are from verified purchasers, and factors that establish reviewer trustworthiness.

Ophelious
4.0 out of 5 stars A Very Good Value
Reviewed in the United States on January 10, 2015
Style: Manual StarterVerified Purchase
I bought this product because I have had good luck with my Poulan riding lawnmower, and Poulan products have attractive prices. It replaces my Toro Powerlite, which gave up the ghost after 10 years.

I've only been using this product for this winter season, so I have limited experience, but I wanted to share my impressions so far.

1) It arrives in a big box. It's heavy. I could move the box myself, but it took effort.
2) There really isn't too much "set up." The chute needs to be attached, but that isn't very hard.
3) The oil and gas are separate. You don't need to mix them. It comes with the oil you need.
4) Mine started on the first or second pull each time. There is no electric starter.
5) It takes more of a "warm up" period than my Toro, which was ready to go pretty much as soon as it started. I think 45 seconds to 1 minute works. I tried using it after about 20 second and it stalled.
6) The idle, at least on mine, is a bit uneven, even when warm. My Toro was like that, too, so maybe it's common on small engines.
7) The snow thrower is turned off by removing the key. The key does not turn, just goes in and out.
8) One confusing thing: There appears to be no dipstick attached to the oil filler cap, though there is clearly one shown in the instruction manual. I thought mine was broken until I read other people saying the same thing.
9) Snow Thrower will work with about 1 foot of snow. I've done more by tilting it, but that's usually pretty fluffy snow.
10) It will do 1 foot of heavier snow, like around the mailbox, but it will start to stall while doing it. You have to go slow and pull the snow blower back repeatedly.
11) The chute is not as tough as it should be. It has a tendency to start turning on its own, especially with heavier snow. The hood part will move upward on it's own if pieces of ice go through it. There might be a way to rig it so that it won't, but it's too cold out for me to mess with it right now.
12) It's not the easiest beast to move, especially if it's an angled driveway. It is not like my Toro, which kind of pulled itself forward on its own by using the blade. It's all "person power." This is made more difficult by the undersized wheels, which are essentially useless. Pushing it is more like pushing a sled.
13) It is powerful enough to throw to either side of my driveway from the middle, but not from all the way across.
14) It is quieter than my old Toro, and has a wider clearing path.
15) You can let go of the handle and the engine will still run--just the paddle will stop turning.
16) Most of the outside shell is plastic.

Those are my impressions. I think I liked my old Toro better, but I was a little strapped for cash and this model represented a very good bargain. Overall, I would recommend this snow thrower based on my experiences so far.

John A. Brissette
5.0 out of 5 stars Easy assembly, starts right up, seems well made.
Reviewed in the United States on January 4, 2016
Style: Manual StarterVerified Purchase
Update!! We are in the midst of the massive deadly blizzard hitting the northeast. I woke up to nearly 2 feet of snow, blizzard conditions. The first time in 20 years I couldn't get to work. It's that bad. I pulled this machine out and got a head start on cleaning. It worked like a dream. Small but maneuverable, tough, it handled over two feet of snow beautifully. It like a little bulldog!! Love it.

Haven't had snow yet but assembly was a breeze & it started right up. Love the fact that there's no mixing gas/oil & the fact that rubber blades mean it won't damage pavers.
Read more

Richard Stewart
5.0 out of 5 stars Good machine great value
Reviewed in the United States on April 7, 2018
Style: Manual StarterVerified Purchase
This machine impressed the hell out of me. The first time I used it was a storm that dumped about 8 inches of wet snow here. This machine handled it no problem. Even out back of my house where the snow tends to drift from the winds it went right through it, and it was upwards of a foot out there. You do need to take it slow and let the machine do its thing. I stalled it once near the end but that was my fault, I was getting tired and started pushing too fast.
It comes with the oil you need and I'm grateful for that as I didn't open the box until that storm hit and didn't have any oil here. The dipstick is on the lower left of the machine and easy to get to.
Overall I would recommend this machine, glad I bought it.
Read more
3 people found this helpful
Helpful
Comment Report abuse

bnbaral
1.0 out of 5 stars Piece of junk.. stop working after 10 min of first use.
Reviewed in the United States on March 16, 2017
Style: Manual StarterVerified Purchase
Bought this junk in October 2016. Used it last week for the first time and belt broke in 10 min of use. Called Poulan Pro and the lady suggested me to go to service center and it is under warranty. Today Drop the unit to their service center - Green Blade Repair at Freehold, NJ. Now service center guy called and told me that belt is not covered under warranty and need to pay $69.99 which he already fixed it without my authorization. Called the Poulan Pro and they are also denying. Now going to complain to consumer court....
Read more
7 people found this helpful
Helpful
Comment Report abuse

UPDATE
used for first time......med wet snow 7 inches moved the snow without any problem......as expected plowed snow at the end of the driveway slowed it down but still accomplished the job i am verry happy with the performance
starts with one VERY easy pull
Read more
4 people found this helpful
Helpful
Comment Report abuse

John Miller
3.0 out of 5 stars Not worth it if you have lots of snow to throw.
Reviewed in the United States on February 9, 2020
Style: Electric StarterVerified Purchase
Used it once and can't get the engine to start again. Not sure what happened after getting it I tried to start it up hit the primer twice and cranked the engine and it didn't want to start. Ended up pumping the primer almost 8 times or so then it finally fired up. Then kept starting it until finally we got some snow it fired up fine with the starter and attempted with about 6 inches of snow it took awhile it kept stalling on me and then finally it stopped working altogether. I could never get it to start after that. Plus when it arrived one of the keys were broken in half and the oils cap was chipped but nothing too serious. These things I chaulk up to shipping issues. Price was too good not to try but now I'm in the hole. I could have been stuck with a lemon
Read more
Helpful
Comment Report abuse
See all reviews from the United States
Pages with related products. See and discover other items: poulan pro lawn parts, snow removal equipment, snowblower snow thrower, best electric snow blowers