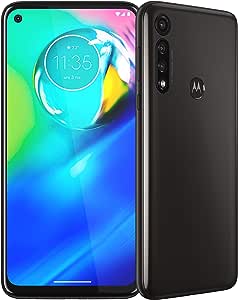 Visit the Motorola Store
4.6 out of 5 stars 3,617 ratings
| 619 answered questions
Amazon's Choice recommends highly rated and well-priced products.
Amazon's Choice for Unlocked Cell Phones by Motorola
Available at a lower price from other sellers that may not offer free Prime shipping.

Go up to three days on a single charge with the new moto g power. Shoot the perfect photo from any angle with a versatile triple camera system, and enjoy dual stereo speakers tuned by Dolby with a 6.4” Full HD+ display.

Global Unlocked: use on any carrier, any plan. Ready for use when you insert your SIM.

Set yourself free from chargers and outlets. Say hello to moto g power. With its powerful 5000 mAh battery, you can go up to three full days * on a single charge—and do the things you want without worrying about recharging. Shoot a panorama, close up, or anything in between with a versatile triple camera system. And thanks to the 6. 4” Max Vision Full HD+ display and dual stereo speakers tuned by Dolby, you’ll have an all-access pass to the world of entertainment. New moto g power. Power for life.

4.6 out of 5 stars
4.6 out of 5
3,617 global ratings
How are ratings calculated?
To calculate the overall star rating and percentage breakdown by star, we don’t use a simple average. Instead, our system considers things like how recent a review is and if the reviewer bought the item on Amazon. It also analyzes reviews to verify trustworthiness.

MDW
5.0 out of 5 stars Hello Moto
Reviewed in the United States on May 21, 2020
Verified Purchase
Review by 43 year old American male. I needed a new cell phone that has a few specific features. Long battery life, a current barebones Android OS, and water resistancy. The battery life in the Moto G Power is beyond excellent... it goes and goes for days. It came out of the box undamaged and well packaged with all needed accessories included. It has basic Android 10 (with the May update running perfect) and without any extra crapps installed besides a few Motorola necessities that make operation simple. I don't have a car... but I ride a Harley-Davidson everywhere, the other day I had the Moto G Power mounted to my handlebars during a rainstorm and the phone still works perfect. I have installed some upgrades - 1) T-mobile simm card 2) UAG brand case/cover (retails $30+) that I purchased online from Best Buy for about $15... use coupon code "20percentoff" during checkout for a nice discount. 3) Patriot 256gb micro SD card for extra file/photo/video storage - purchased on Amazon. 4) [3 pack] Janmitta screen protector HD clear anti-scratch no bubble tempered glass film - purchased on Amazon. All upgrades fit and work as intended.
Read more

Kindle Customer Linda
5.0 out of 5 stars EASY, beautiful, understandable
Reviewed in the United States on July 15, 2020
Verified Purchase
I LOVE THIS PHONE. I am 69 years. I just want a phone that is easy for me to handle. My last phone was junk. I usually struggle with tech but the MOTO G POWER phone is so easy for me. There is lots of support and tips on this phone. The features and keyboard are LARGE EASY TO SEE and to READ THE SCREEN, BEAUTIFUL COLOR, long battery life, GREAT SOUND/CAN BE LOUD IF YOU NEED. The camera takes wonderful pictures. I am not using the fingerprint feature because with all the DYI and yard work I do, I don't have fingerprints. FOR WHAT I GET WITH THIS PHONE THE PRICE IS VERY RIGHT. I highly recommend this phone. Linda
Read more

Theodore A Knudsen
5.0 out of 5 stars I really love this phone.
Reviewed in the United States on June 4, 2020
Verified Purchase
I am not even a casual cel phone user and my last phone was a Galaxy S3, so I'm badly behind the times. I needed a new phone for my work and I laid out the criteria of what I was after - a massive battery life, 1080p HD screen, the latest Android OS (10 in this case), a fingerprint reader, an excellent quality camera capability, and the ability to play emulated games that would include the 'harder to run' ROMs for Playstation Portable emu. I also needed the phone to be USA carrier unlocked and be ready to use Mint Mobile as my provider.

After watching about an hour of reviews for different phones, I ordered this one. Motorola knocked it out of the park with this phone's specs vs the price point. It's farkin' amazing. I've tested it out, and it does absolutely everything that I was after, including running God of War on the Emu which usually cripples most budget phones. It didn't come with a bunch of junkware (aside from Goggle Discover) and the few pieces it had, I was able to remove or disable immediately. I'm very pleased, and will end up using this thing for a loooong time.

the_Mike
5.0 out of 5 stars Replaced a new iPhone XR
Reviewed in the United States on June 3, 2020
Verified Purchase
I just got an iPhone XR around Dec 2019. It took a while to get use to. I started a return but kept it anyway. The longer I had it the more it didn't do what I needed. I found the Moto G Power when I wasn't looking. Expandable storage, plays local media, doesn't have to be constantly connected to work perfect, Bluetooth connected to everything and all my old apps were waiting to be used again. Also i can make it look like I want it to look. All for less than half of what I paid for an XR.
Read more
233 people found this helpful
Helpful
Comment Report abuse

poopzilla
5.0 out of 5 stars Very happy switching from an S7 Edge
Reviewed in the United States on May 11, 2020
UPDATE: phone was inadvertently subjected to the toilet water submersion benchmark. It passed. The speakers sounded weird for a few hours but now are fine.

I really like it. I've been using mine for several weeks. The major appeal is certainty that the battery won't die during a given day of use, no matter how heavily I use it. Incidentally, it also seems to "idle" much better than my old s7 edge; if it stays in my pocket most of the day, I can go to bed with 85% charge!

The interface, screen, cameras, and build are also acceptable. I am really surprised that I like the Moto Gestures, and (unlike the android 10 gesture navigation, which I don't like) the Moto Gestures are compatible with third party launchers like Nova. In general, it seems to load apps like Maps and Amazon a lot faster than my old phone, even though benchmarks are similar. The main camera takes great basic pictures. The wide and macro lenses are a really bizarre choice (the European version has a telephoto lens, which would have been more useful) but are a fun bonus. Against my better judgement, I've also taken it in the shower a few times (put it in the back on a shelf, exposed only to minor splashes) and it's survived.

Also, it does 5ghz WiFi, unlike the European version, which was a point of some complaints for the European model.

There do seem to be some minor software bugs. "Smart Composition" rarely works (based on reviews of other Moto devices, it literally has never worked on any of them), I've occasionally had phone calls drop (unsure if this is phone's fault), and the Dolby smart audio - which admittedly sounds better in every setting I've tested - seems at risk of overdriving the speakers at max volume and potentially blowing them out. Stock android apps are awesome but designed for phones without sd card support and occasionally struggle with sd card permissions.

Caspey84
5.0 out of 5 stars Can't believe it's only $250
Reviewed in the United States on May 19, 2020
Verified Purchase
The hardware demands for 90% of the tasks people use their phones for is fairly low. I've been buying phones in the "budget tier" for many years now. I need some more time with it, but the Moto G Power is probably the best one I've used.
Read more
185 people found this helpful
Helpful
Comment Report abuse
See all reviews

TEECY
5.0 out of 5 stars Last lasting battery
Reviewed in Singapore on November 18, 2020
Verified Purchase
Get this phone if you are looking for one with long battery life. I have used it for more than a day without having to recharge.
Read more
Report abuse
See all reviews