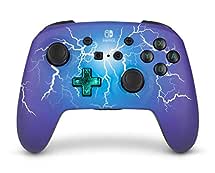 Gain a competitive advantage by keeping your thumbs on the analog sticks and mapping actions to two buttons on the back of the controller. There is no app or system settings to configure. Simply hold the program button for two seconds (1) followed by the button you wish to map (2), then select either AGR or AGL (3) to complete the process for quick on-the-fly button mapping.

PowerA Wireless controllers free you from being tethered to the console and provide a tangle free gaming experience. Our design is built for comfort during extended gaming sessions using high quality materials. Enjoy up to 30 hours of gameplay with new alkaline batteries (other variables affect play-time) or add your own rechargeable batteries.

* Can be used when Nintendo Switch is docked or undocked. Does not support HD rumble, IR, or Amiibo NFC ** other variables affect play-time

4.4 out of 5 stars
4.4 out of 5
1,035 global ratings
How are ratings calculated?
To calculate the overall star rating and percentage breakdown by star, we don’t use a simple average. Instead, our system considers things like how recent a review is and if the reviewer bought the item on Amazon. It also analyzes reviews to verify trustworthiness.

Lexi T.
1.0 out of 5 stars Joystick Stuck Drifting
Reviewed in the United States on May 16, 2020
Color: Teal FrostVerified Purchase
I purchased this controller to replace my daughter's PowerA that was stuck with joystick drift. My daughter's previous PowerA lasted approximately six months (from Christmas until the end of April). We had the new controller for less than a month and the joystick is stuck drifting to the left. After researching how I could fix it, I discovered this is a very common problem with the PowerA brand. I sincerely do not recommend it. Luckily, Amazon was very good about refunding my money.
Read more
16 people found this helpful
Helpful
Comment Report abuse

Ryan M.
1.0 out of 5 stars Big nope nope
Reviewed in the United States on October 19, 2019
Color: Spider LightningVerified Purchase
I bought this. It wouldn't connect. I had amazon replace it with another one figuring random issue... second one also would t connect. Went to walmart. Bought the same one.... it connected just fine. Whatever seller is peddling this model for amazon has a bad batch or something...
Read more
19 people found this helpful
Helpful
Comment Report abuse

Amazon Customer
5.0 out of 5 stars Great controllers if you don't mind the slight rattle
Reviewed in the United States on July 15, 2020
Color: Teal FrostVerified Purchase
I purchased one for myself and my boyfriend for our Nintendo Switches. I think the batteries do power through for the 30 hours (we personally have to replace them about every 2-4 weeks depending on gameplay, but I'd rather do this than charge it every night). I don't mind not having HD rumble, and for Animal Crossing I appreciate it because when you catch a large fish it can be wayyy too much. I also love the 2 extra programmable buttons on the back. I currently have one set to the B button, so I can easily jump in Fortnite and run in ACNH. They sync immediately to my switch. My only con is that the triggers rattle A LOT, but it's not noticeable when you're playing. I would 100% purchase these again!
Read more
6 people found this helpful
Helpful
Comment Report abuse

Tommy Z.
5.0 out of 5 stars Easy Peasy
Reviewed in the United States on August 25, 2020
Color: Teal FrostVerified Purchase
Dead easy to set up, came with a set of batteries so you can use it straight out of the box. The plastic feels quality and the movement of the joysticks is very smooth tacitly. Only had it for a day and considering purchasing another. My only qualm is that the D Pad is set in a bit further on the controller than I'm used to on the Switch. Which would be a selling point for someone with larger hands, but I find the spacing a bit awkward and hard to adjust to. Over all pretty thrilled with this controller and would definitely reccomend.
Read more

Colin Kimsey
5.0 out of 5 stars Great option for a Pro controller stand-in!
Reviewed in the United States on October 5, 2019
Color: Teal FrostVerified Purchase
First, I would like to say that I'm a sucker for turqoise, having grown up with a GameBoy Color of said color; the minute I saw this, I HAD to have it.

Now, on to the main things to say, I got Power A's wireless GameCube controller with Christmas money, and fell for it right away; however, the button layout mostly works for Smash Bros. Ultimate, since some Switch games don't give you control-change options. With this in mind, I decided to look into getting one of these when I could afford it. Day one, I played with it quite a bit, playing three maps in Hyrule Warriors Definitive Edition to test out its button latency, and control, and I can safely say that both control sticks work like a charm, the buttons feel natural to press, and even the shortcut buttons on the back help quite a bit! I currently have them set for the left and right d-pad, myself, so I can cycle through my items without stopping to use the control pad. The L, ZL, R, and ZR buttons are sorta clicky, and mildly loose, so they wiggle a bit, but they do exactly as they need to, and they feel just right to press. The home buttons are small, and plastic-y, but that's somewhat expected; they do feel nice to press, and their being right in the middle of the controller make them easy to reach!

Now for the d-pad itself. It differs from the rest of the controller, being a metal pad, for some reason; it's nice, and it's pretty, and feels surprisingly nice to use. It responds well when pressed, and I was able to use it to play Super Mario World quite well! At least, until the first castle. I noticed that diagonal presses to the up and right were hardly registering, even though diagonal down-right, and down-left worked just fine. I don't know for certain if it's this model of controller, or if it's a simple fix, but it's going to make platformer gaming more cumbersome for me. Even despite this, though, every other feature of the controller feels just right, so hopefully it won't interfere with my gaming too much.

Meg
4.0 out of 5 stars Great purchase
Reviewed in the United States on July 20, 2020
Color: Teal FrostVerified Purchase
Weary about getting 3rd party, this is licensed through nintendo. Love the color and it reminds me of my old purple GameBoy color I had back in the day. Lightweight and is so comfortable.

Minor complaints:
No rumble feature and the battery life is iffy based on if you leave your switch on sleep mode or not, the controller is always trying to pair if you hit a button or control stick. Maybe take the batteries out so you don’t waste them if you’re not playing for a day or two. Most pro controllers don’t have the amiibo reader, so this wasn’t a surprise to me.
Read more
3 people found this helpful
Helpful
Comment Report abuse

Amanda H
5.0 out of 5 stars Great controller.
Reviewed in the United States on September 4, 2020
Color: Teal FrostVerified Purchase
Bought this for my daughter so that she had her own controller for the switch. She loves it.
Her review is: "It's light, and I really, really like it. It works with me."
My review:
Wish we had read that it gets "approximately" 30 hours of battery life, because during the summer that goes quick. However, we didn't change the battery right when the low-battery light came on, because I like to live on the wild side, and it still hung on for a few days after that. Obviously, a controller stopping mid-game means a lot less to a 7 year old than an adult. I'd definitely recommend purchasing some rechargeable batteries with this.
Read more
2 people found this helpful
Helpful
Comment Report abuse

Mike M.
2.0 out of 5 stars Just pass on this controller and go for the Pro controller.
Reviewed in the United States on July 26, 2020
Color: Teal FrostVerified Purchase
I got sick of the cheap Joycon quality and wanted something better for playing games on my Switch. I opted for the PowerA because it was cheaper and had some fun color options. When it arrived it was just another bad third party controller. I was surprised it didn't have a vibration function. I ended up returning it and just buying a Pro. It's not for me but if you want something cheap and don't care about the vibration then go for it. If you want something quality just sink the extra cash into the Pro controller. Plus the Pro is rechargeable, the PowerA is not.
Read more
2 people found this helpful
Helpful
Comment Report abuse
See all reviews

Amazon Customer
1.0 out of 5 stars Poor quality, doesnt last long
Reviewed in Canada on April 28, 2020
Color: Spider LightningVerified Purchase
Poor quality, had it for a month and the right joystick stopped working.
I had the same kind a month before that and the L and LZ buttons both stopped working.
These were both used, but definitely not used aggressively.
Not sure what to do with them,I figured being Nintendo products they'd be good quality, but they sure dont seem worth 65 bucks every month.
Read more
Report abuse

Page 1 of 1 Start overPage 1 of 1
This shopping feature will continue to load items when the Enter key is pressed. In order to navigate out of this carousel please use your heading shortcut key to navigate to the next or previous heading.
Back
Next
Pages with related products. See and discover other items: Control Switches, switch accessory