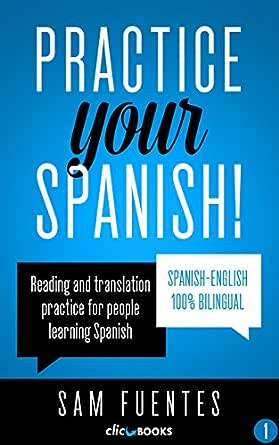 You've subscribed to Spanish Practice! We will preorder your items within 24 hours of when they become available. When new books are released, we'll charge your default payment method for the lowest price available during the pre-order period.
Update your device or payment method, cancel individual pre-orders or your subscription at
Your Memberships & Subscriptions
There was an error. We were unable to process your subscription due to an error. Please refresh and try again. 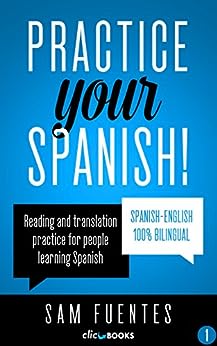 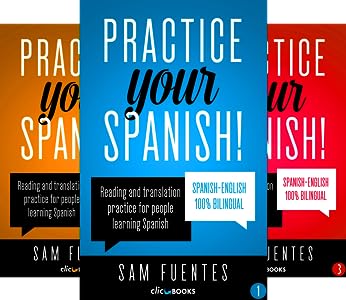 4.2 out of 5 stars
4.2 out of 5
20 customer ratings
How does Amazon calculate star ratings?
Amazon calculates a product’s star ratings based on a machine learned model instead of a raw data average. The model takes into account factors including the age of a rating, whether the ratings are from verified purchasers, and factors that establish reviewer trustworthiness.
Top reviews

Xanzoc
5.0 out of 5 stars Very thoughtfully put together.
Reviewed in the United States on June 8, 2018
Verified Purchase
Very thoughtfully put together. I was seeking book written originally in intermediate level Spanish with an available translation to English, with the intent of reading them side by side with Kindle apps. However, this is with the stipulation that the story takes place in the present world, and not deal with magic, pirates, vampires, etc --- just real life. Not to knock those genres, but my purpose is to learn Spanish for normal interaction with others. Even overly stylized jargon, as with the hard-boiled detective or the overly-"teen" teenager which the writer feels every word must be over the top character, are not to my desire. I have found this to be impossible to find. Keep in mind I said written originally in Spanish, not English. I don't mind if the English translation has to be shoe-horned to fit, but I don't want that to be true of the Spanish. I want Spanish as a writer would choose to write, not forced to deal with translation. Okay, so all that said, I came across this book, and while not what I was hoping to find as far as fiction, it did work out very well as practice material, particularly because there was obviously some well-intended thought put into the work. This is not for the beginner, because there is much more with higher priority to learn that the contents here if you have not reached the intermediate level. But the examples within really did help notch up my Spanish comprehension and target for improvement areas of weakness that I would have not otherwise targeted so effectively on my own.

I have to say that I read through the book intermittently over the course of many months, sometimes not touching it for months due to becoming involved with other things. Also, I use a flashcard app to schedule daily Spanish, and as I read this book, added study material to the app gleaned from what I found most relevant in the book. But having finally made my way to the end, I have noticed improvement in Spanich comprehension (both with grammar and vocabulary), such as when I pick up the local spanish weekly newspaper for instance. I believe this is because Sam Fuentes really put thought into what he selected for his examples. The fact that some of the English translations are at times awkward (just here and there) was actually a good sign to me. This meant that the material was truly originally written in Spanish. It also exemplifies why I do not seek material originally written in English, because then the same problem is likely to exist, but in reverse, and as a native English speaker, I would have no way of knowing. As I type this, offhand I can't remember for sure, but I believe Sam Fuentes created this for his own students, and it shows. As I said, very thoughtfully put together, and that is why I am taking the time review this, which I don't typically bother with. I just want to express my appreciation for what he did. I will be buying the next in the series as soon as I type the last period in this review.
Read more
Helpful
Comment Report abuse

As I continued with this book I realized my original review was too harsh...the vocabulary in this book has become quite helpful and practical..for example in one dialogue I learned how to name someone after someone and how to say someone lives up to his name.
I am looking forward to all the other volumes of 'Practice your Spanish' by Sam Fuentes.
Read more
Helpful
Comment Report abuse

JS
5.0 out of 5 stars Good practice for sentence forming and translation
Reviewed in the United States on January 3, 2016
Verified Purchase
I like the fact that is gives you sentences in english, then you think about it and the next page is the spanish translation. There are also some that are the other way around, first page is spanish then the next is english. If you want to switch it up, just read the sentence portions of the book backwards. That way it can be studied both ways.
Read more
One person found this helpful
Helpful
Comment Report abuse

Holly
5.0 out of 5 stars Really good
Reviewed in the United Kingdom on April 21, 2017
Verified Purchase
Great book, exactly what I was looking for to improve my translation skills and increase my vocabulary. Would highly recommend this!
Read more
Helpful
Sending feedback...
Thank you for your feedback.
Sorry, we failed to record your vote. Please try again
Report abuse

witchywoman
4.0 out of 5 stars Four Stars
Reviewed in Canada on May 21, 2017
Verified Purchase
was good
Read more
Helpful
Sending feedback...
Thank you for your feedback.
Sorry, we failed to record your vote. Please try again
Report abuse