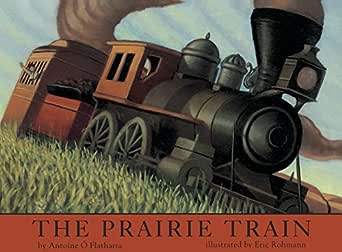 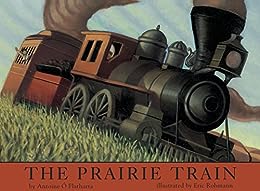 PLB 0-517-70989-9 In this poetic book from an Irish playwright and Rohmann (The Cinder-Eyed Cats, 1997, etc.), an immigrant child dreams of returning to Ireland, carried across the sea by the train that is actually taking him in the opposite direction, away and over the wide prairie. The train itself is a dreamer, yearning to spring its tracks and sail the oceans; instead, in Rohmann's accomplished, lapidary paintings, it speeds through waves of grass under immense skies, seeming at once majestic and, with its clean, rounded lines, toy- like. The story is a metaphorical take on the immigrant experienceyoung Conor accidentally drops out the window the model ship his grandfather had carved as a going-away present but later dreams of hearing the old man promise that ``there's bigger boats waiting for you.'' Readers will feel Conor's poignant sense of being severed from his past, and will understand why he accepts that forward, for the train and for him, is the only direction there is. (Picture book. 7-9) -- Copyright ©1999, Kirkus Associates, LP. All rights reserved. --This text refers to an alternate kindle_edition edition.

Grade 1-5-"Once upon a time, there was a train that dreamed of being a boat." And once upon a time, there was Conor, a heartsick immigrant boy traveling across the prairies to a new home, his toy boat in tow. When the two meet, the world re-forms itself into a lovely fantasy. In prose rich with images and metaphor ("...the Prairie Train traveled through towering grass that moved in the wind like gigantic green waves"), O Flatharta's fanciful tale flows across the pages, drawing readers into the dream journey of the train and the boy. The story has wisdom and depth: "There's bigger boats waiting for you," his grandfather tells him in the dream. "It's the same moon that's shining on all of us. Makes no difference if you're in Connemara or San Francisco." The tale also has a satisfying and uplifting conclusion: "As the morning sun climbed higher and higher in the sky, Conor and the Prairie Train moved forward together." Rohmann's stunning paintings evoke a dreamlike state. Dramatic use of light, bold brush strokes and surprising perspectives combine to make memorable illustrations that truly complement the prose. A unique and powerful book.
Lee Bock, Glenbrook Elementary School, Pulaski, WI
Copyright 1999 Reed Business Information, Inc. --This text refers to an alternate kindle_edition edition.

"The book's handsome design, as well as Rohmann's deft portraits of Conor and his fellow immigrants, adds to the book's many deeply felt pleasures."
-Publishers Weekly

Eric Rohmann lives in the Chicago area. --This text refers to an alternate kindle_edition edition.

pon a time there was a train that dreamed of being a boat."

It was the train that took immigrants seeking a better life in the New World across the endless flat prairies to San Francisco. And it was the train that took Conor, a small homesick boy from Ireland, on the voyage he would remember for the rest of his life. While on that train, Conor dreams of being back in Connemara, Ireland, with his grandfather, when suddenly, to his amazement, the waving prairie grass becomes the sea and the train on which he is traveling, like a boat, sails across it right back to his home. How Conor comes to realize that the home he's left behind will always with him provides a reassuring and deeply satisfying resolution to thie poignant tale. The dreamlike paintings by Cadecott Hoor artist Eric Rohmann combine with the lyrical text of Irish playwright Antoine O Flatharta to make this one of the most memorable books of this -- or any -- season. --This text refers to an alternate kindle_edition edition.

"The book's handsome design, as well as Rohmann's deft portraits of Conor and his fellow immigrants, adds to the book's many deeply felt pleasures."
-Publishers Weekly

Matt Stark
5.0 out of 5 stars Family favorite!
Reviewed in the United States on May 18, 2011
Verified Purchase
This is one of my son's favorite book. He reads it all the time. Thanks for a great transaction and good quality book!
Read more
Helpful
Comment Report abuse

John Call
5.0 out of 5 stars This was a time...when trains were extraordinary
Reviewed in the United States on May 29, 2005
The professional reviews did not prepare me for the poignancy and beauty of this story. The story is of a young boy, forced to leave behind his home, loved-ones, comfort, and security for the unknown adventure of the new world. His link to the known and familiar was a small wooden boat carved by his grandfather. Just as he was beginning to embrace the wonder and awe of his beautiful adventure the boat slips from his hands and is lost forever in the prairie grass. Despite the attempts of parents to comfort him in his loss, the longing for home and things as they were envelope his thoughts and he will not be comforted.

That night his grandfather comes to him in a dream and counsels him, as only a grandfather can, to leave behind the sadness and look forward to the beauty awaiting at the journey's end. In that brief heart-to-heart talk with his grandfather the boy is lifted and the new day dawns with a fresh resolve to cheerfully move forward.

The story will resonate with anyone who has had to face the unknown or has had to journey to a new world leaving a comfortable world behind. Did I forget to mention there are boats and a train sailing over the ocean and prairie to hold the imagination of a young child? For the young child the loss of the toy boat is a signal that the story is about to take off to new adventures. While my little one understands the loss of a treasured toy he doesn't have the experience to let more subtle concerns interfere with a good story and great pictures.

As for me, it is satisfying to find a book with an underlying message on par with The Little Engine that Could and "I think I can." But this story touches deeper than what the happy little girls and boys on the other side of the mountain can appreciate. Parents and Grandparents will find this a satisfying reading experience with their young explorer. This book gives both the reader and the listener a wonderful feeling, that is, in the words of the inside cover flap, "deeply satisfying."

The artwork is beautiful. The inside covers have a beautiful stylistic map of the journey from Connemara Ireland to San Francisco.

MA Pashigian
5.0 out of 5 stars An Immigrant Tale for Train Lovers
Reviewed in the United States on November 23, 2010
In The Prairie Train, Irish playwright Antoine Ó Flatharta adeptly brings the magic of trains to a story of hope and longing among an immigrant family looking for a better life in the New World. Told through the eyes of a young homesick boy named Conor, the story will appeal not only to children crazy about trains, but also to anyone who's had to move or leave something or someone behind.

The gorgeously illustrated topographical map of Conor's journey at the front and back of the book sets the scene. It's the 1890s and an Irish family sets sail from the scenic peninsula of Connemara in County Galway to New York. After the family has made it to Chicago, the narrative begins like a fairy tale,"Once upon a time, there was a train that dreamed of being a boat."

As the train leaves Chicago, Conor stares at the toy wooden boat his grandfather had carved for him and listens to the unfamiliar sounds of the polyglot crowd. He sticks his head out the window to get a better view of the train and wave to the engine, but in doing so he inadvertently drops his treasured toy boat out the window.

Conor's cries to stop the train go largely unheeded as his fellow passengers and ultimately the train itself chime in with a chorus of, "Can't stop the train." The steam train's gentle rocking from side to side induces sleep and Conor's dream is the antidote to his homesickness. You'll need to read the rest; revealing the dream would spoil the adventure.