You've subscribed to Dread Empire's Fall! We will preorder your items within 24 hours of when they become available. When new books are released, we'll charge your default payment method for the lowest price available during the pre-order period.
Update your device or payment method, cancel individual pre-orders or your subscription at
Your Memberships & Subscriptions
There was an error. We were unable to process your subscription due to an error. Please refresh and try again. 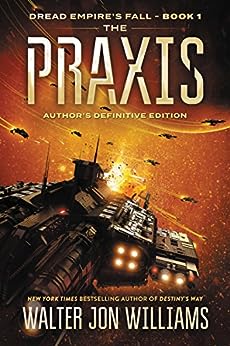 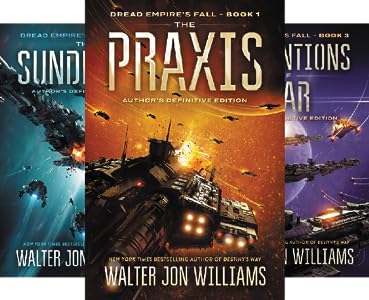 “Space opera the way it ought to be [...] Bujold and Weber, bend the knee; interstellar adventure has a new king, and his name is Walter Jon Williams.” (George R.R. Martin) --This text refers to an alternate kindle_edition edition.

Walter Jon Williams is a New York Times bestselling author who has been nominated repeatedly for every major sci-fi award, including Hugo and Nebula Awards nominations for his novel City on Fire. He is the author of Hardwired, Aristoi, Implied Spaces, and Quillifer. Williams lives near Albuquerque, New Mexico, with his wife, Kathleen Hedges.

All will must bend to the perfect truth of The Praxis

For millennia, the Shaa have subjugated the universe, forcing the myriad sentient races to bow to their joyless tyranny. But the Shaa will soon be no more. The dread empire is in its rapidly fading twilight, and with its impending fall comes the promise of a new galactic order . . . and bloody chaos.

A young Terran naval officer marked by his lowly birth, Lt. Gareth Martinez is the first to recognize the insidious plot of the Naxid -- the powerful, warlike insectoid society that was enslaved before all others -- to replace the masters’ despotic rule with their own. Barely escaping a swarming surprise attack, Martinez and Caroline Sula, a pilot whose beautiful face conceals a deadly secret, are now the last hope for freedom for every being who ever languished in Shaa chains -- as the interstellar battle begins against a merciless foe whose only perfect truth is annihilation.

4.1 out of 5 stars
4.1 out of 5
196 global ratings
How are ratings calculated?
To calculate the overall star rating and percentage breakdown by star, we don’t use a simple average. Instead, our system considers things like how recent a review is and if the reviewer bought the item on Amazon. It also analyzes reviews to verify trustworthiness.
Top reviews

Herb G
2.0 out of 5 stars This is a strange, uninteresting book
Reviewed in the United States on November 30, 2019
Verified Purchase
Walter Jon Williams is one of my favorite authors. So when I saw that he'd written a sci fi trilogy, Dread Empire's Fall, I ordered the 3 books, The Praxis being the first. To begin, over half of the book is devoted to the boring back story of the 2 main characters and the full narrative doesn't really get going until page 230 or so of a 420 page book and even then it's in fits and starts. Yes, it's all very well written and the action sequences are excellent but with over half the book devoted to back stories that didn't have all that much to do with what followed, it seems like a wasteful and curious beginning to a trilogy. In addition, both of these main characters are uninteresting and unlikable and neither generates much sympathy for their plights. Patience is required. At any rate, I'm looking forward to the next installment. (Pet peeve: It bothers me when a writer consistently uses a word that can be pronounced 2 different ways. In this case, it's the planet called Margaria. Is the accent on the 'gar' or the 'i'?)
Read more
7 people found this helpful
Helpful
Report abuse

Amazon Customer
2.0 out of 5 stars Every bit as exciting as the characters, who aren't exciting.
Reviewed in the United States on March 22, 2019
Verified Purchase
Now to be fair, I read this book after reading the Red Rising series. So it had a lot to live up to; which was my fault for thinking it would. The characters are about as bland as can be but I do understand why the writer went this route. He wanted characters that were neither good nor bad, just people that lived in the world and happened to be tactical geniuses. If you are looking for space battles, look elsewhere. Even the large fleet engagement is as exceptionally bland as everything else. The political intrigue is bland, the life aboard a star-ship is stale, and the "enemy" doesn't even seem that bad. This might be the first author to ever make a sentient, militarized bug race bent on galactic domination feel about as scary as your average picnic ant that my 2 year old has no fear of attacking. I read the second novel just to see if it gets more exciting with a full blown war, but sadly no. To put it simply this book, as well as the next, are just flat. No tension, no ups or downs, no feelings of depression or excitement. The only reason I gave the book 2 stars is because it was written well (as in no typos, proper punctuation, solid paragraph length) and the world that the writer created actually looked pretty interesting. I can't say I know what a "space-opera" is supposed to be but I do know that operas have more than one note and so should any novel.
Read more
5 people found this helpful
Helpful
Report abuse

redbull21
5.0 out of 5 stars Praise for Dread Empire's Fall series!
Reviewed in the United States on January 1, 2017
Verified Purchase
I am writing this review to include all three novels in the Dread Empire's Fall series. I guarantee if you read the first you will read all three and they are all equally good. WJW is right up there with Peter F. Hamilton, Alastair Reynolds, Neal Asher and Iain M. Banks in my mind. If you haven't guessed I favor Space Opera. With the action and intrigue the entertainment value cannot be beat. Like the others I mention, Williams is a master storyteller, utilizing deft character creation and a subtle hand with language. The love scenes between Martinez and his women are delicately written, so much so that I passed my Kindle to my wife so she could read them. The battle scenes focus more on the intellectual side of determining strategy to beat the scummy Naxids than on simple bloody action, although that also has a place. The almost surreal collaboration between Sula and Martinez is interesting as well. Don't make the mistake of missing out on Walter Jon Williams brings to the table.
Read more
7 people found this helpful
Helpful
Report abuse

James Marino
1.0 out of 5 stars Most disappointing
Reviewed in the United States on November 6, 2018
Verified Purchase
Was hopeful from the prologue that this might be interesting. However it turned into a science fiction version of "Pride and Prejudice". Yuk! I'm not interested in some silly political advancement through marriage tome. What ever this is it's not good science fiction. Gave up 1/2 way through. I don't care whose sister marries who for the political gain of some imaginary clan in some imaginary society. I won't be reading this author ever again. What a waste of my time and money.
Read more
4 people found this helpful
Helpful
Report abuse

Michal Jan Gajda
5.0 out of 5 stars Study of all-encompassing corruption
Reviewed in the United States on January 14, 2021
Verified Purchase
Under the cover of einsteinian space combat, we see a study of all-encompassing corruption that covers all aspects of life and death.
Nothing seems amiss among clan politics, entrenched nobility, arranged marriages, under-the-table payments, birthright entitlements, time-based promotion of the military, Szopenhauerian argumentation, and creative executions of those caught at egregious excess of corruption itself.

I highly recommend the lecture about civilization where "Most what is worth knowing is already known."
Read more
Helpful
Report abuse

Gerald Quinn Jr.
5.0 out of 5 stars Excellent Space Opera: Intelligent, Emotional impact and action-packed!
Reviewed in the United States on October 12, 2018
Verified Purchase
This is one of my all time favorites Sci-fi series. In my opinion, much better characters and story than the good (but way over-rated) Expanse series. It’s an exciting universe of betrayals and challenges, with loads of snobbery and class struggle that keep you cheering for the “underdogs” and secretly hoping that the two protagonists get over themselves and get together!

I encourage pretty much everyone who asks about a good sci-fi series to start with this epic space opera, with easy-to-engage with characters and perfectly described action and battle sequences!

I keep hoping that there will be more of this universe some day!
Read more
One person found this helpful
Helpful
Report abuse

J. Witt
5.0 out of 5 stars Great Fun!
Reviewed in the United States on December 18, 2020
Verified Purchase
Williams is a crackerjack at writing breezy, fun military fiction set in a well thought out, interesting world. The Praxis is interesting to learn about, and the society Williams paints feels vibrant and believable. Actually, the upper crust that Williams writes about, hidebound by tradition, snobbish, elite, is a blast to dive into. The action is lively, the plans clever, the plot twists a kick. You never worry the main characters won't make it (this isn't that kind of book), but how, exactly they will triumph is the open question. High recommend!
Read more
Helpful
Report abuse
See all reviews

Chris
5.0 out of 5 stars Exceptionally good SF space opera
Reviewed in Canada on May 21, 2016
Verified Purchase
An unusually good space opera. Well worth your time and money. I wish W.J. Williams would write more in this genre, it needs good military SF of this calibre. One aspect I liked was that internal consistency was never sacrificed for the plot. Sure, a lot of it is unrealistic (it is space opera, after all), but because the internal rules were never broken, it feels much more realistic than most thrillers out there. The characters are well drawn and complex, and the plot is edge-of-your-seat interesting. Good job Williams, well done.
Read more
Report abuse

Jason Bernard
5.0 out of 5 stars Great book
Reviewed in Canada on July 4, 2019
Verified Purchase
I enjoyed this book immensely. One of the better books for having interesting space naval combat. Excellent world building as well, with aliens that seem alien.
Read more
Report abuse
See all reviews