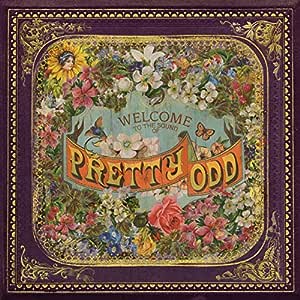 The title gives it away instantly- Pretty.Odd. (don't forget the periods) is not exactly the album that affirmed admirers of Panic At The Disco will have expected. The quartet, then teenagers, hit big in 2005 when A Fever You Can't Sweat Out rode its hit single "I Write Sins Not Tragedies" and its striking video to huge sales, defining their niche bridging emo and theatrical art-rock. Three years later Panic (they've ditched the exclamation mark) return with an expansive album that shamelessly, and very skilfully, takes inspiration directly from the Beatles' bigger budget productions and the baroque classic rock that came in their wake. They must use every instrument in the orchestral palette. But this is hardly a trip to "guilty pleasures" territory, four minute pop tunes polished almost to sterility. Even the catchy, imposing opener "We're So Starving", where they protest "we're still the same band", is playful rather than predictable. "That Green Gentleman (Things Have Changed)" offers so many styles it defies categorisation, the darkly comic sixties pastiche "When the Day Met the Night" could wear the vague "sunshine pop" label comfortably and the likes of "Pas De Cheval" and nicely wistful first single "Nine in the Afternoon" stick in the head after a single hearing. Also the token acoustic strumalong is called "Folkin' Around". Whether their fanbase actively craved such a diverse display of ambition is moot, but Pretty.Odd. is an impressive and deservedly popular collection. For once it seems that the public agree with those critics who so often describe lovingly crafted, low-selling tributes to genres past as perfect pop. --Steve Jelbert

Amazon's Panic! at the Disco Store