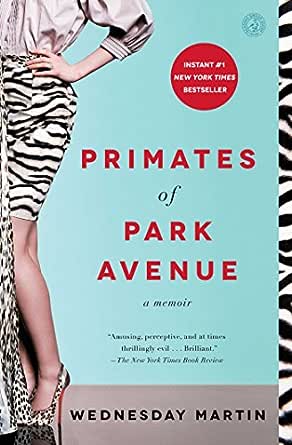 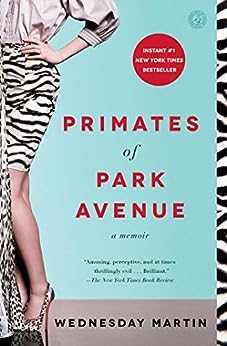 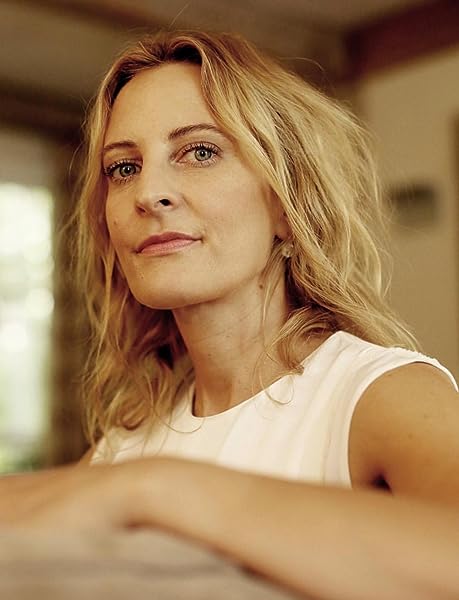 "Think privileged NYC wives are another species? Martin goes undercover in this dishy memoir and reminds us that we all have something in common." (Glamour)

"Amusing...incisive...a wryly entertaining guide to this rarefied subculture." (The Economist)

"Any population is fair game for anthropological research, so why not the super-rich, super-thin, and oh-so-well-dressed mothers of New York's Upper East Side?... Illuminating and fun." (BookPage)

"I absolutely loved this memoir and could not put it down! It's incredibly clever; Martin uses anthropology to analyze Upper East mothers, and it's astonishingly illuminating. Somehow, Martin manages to be caustically perceptive but also generous, funny, moving, and erudite all at the same time. This is one of the most fascinating books I've read in a long time." (Amy Chua, Yale Law Professor and author of Battle Hymn of the Tiger Mother and The Triple Package )

Wednesday Martin, PhD, has worked as writer and social researcher in New York City for more than two decades. The author of Stepmonster and Primates of Park Avenue, she has appeared on Today, CNN, NPR, NBC News, the BBC Newshour, and Fox News as an expert on step-parenting and parenting issues. She writes for the online edition of Psychology Today and her work has appeared in The New York Times. She was a regular contributor to New York Post’s parenting and lifestyle pages for several years and has written for The Daily Telegraph. Wednesday received her PhD from Yale University and lives in New York City with her husband and their two sons. --This text refers to an out of print or unavailable edition of this title.


The island is a geographically, culturally, and politically isolated landmass roughly seven times longer than it is wide. The climate is temperate, with relatively harsh winters and extremely hot and humid summers that, in recent years, approximate tropical conditions due in part to two centuries of intensive land clearing and industrial practices. The island’s longitude is 40°43'42" N, and its latitude is 73°59'39" W.

Island dwellers live in a state of ecological release—resources such as food and water are abundant and easily procured; disease is minimal; there is no predation. Living in a niche characterized by literally unprecedented abundance, untethered from hardship, the wealthiest islanders are able to invest heavily in each and every offspring and to invent elaborate and complex social codes and rites, the observance of which are time-, labor-, and resource-intensive.

In spite of the extraordinary abundance of food, water, and other resources island-wide, there is persistent and marked poverty in some areas. The isolation, extreme population density, and vast discrepancies in wealth, as well as traditionally gender-scripted roles and behaviors around child rearing and work, may inform and in part account for many of the strange-seeming behaviors of the wealthiest island dwellers, discussed in the following pages.


The island’s inhabitants are primarily vertical dwellers, making their homes directly on top of one another in structures of finely ground stone. Living in these “vertical villages” allows inhabitants to maximize physical space, a precious commodity in short supply on their tiny and remarkably densely populated island. In some locations, particularly where the wealthiest islanders reside, these vertical villages are notably restrictive, with a secretive “council of elders” presiding over who will and will not be allowed to live there. Scouting out a dwelling is one of the most labor-intensive practices of the female members of the tribe I studied—most often the task is undertaken by primaparas. Almost without exception, “dwelling shamans” guide these women in their quests for homes—which are also quests for identity. The shamans offer specialized knowledge, counsel, and emotional support throughout this costly, protracted, and painstaking initiation process.


Island dwellers have heterogeneous geographical origins. Many dispersed at sexual maturity from their natal groups in distant, smaller, and even rural villages, immigrating to the island for enhanced professional, sexual, and marital prospects. Other island dwellers are indigenous; their status is higher than that of the nonautochthonous residents, particularly if they were raised in certain corners of the island or attended particular “learning huts” while growing up there.


Beliefs of and about islanders


Whether they are autochthonous or émigrés, island dwellers are believed by outsiders, many visitors, and their countrymen to harbor haughty attitudes about themselves and their island. They are known throughout the land for their brusqueness; intellectual gifts; dazzling adornment practices; and acumen in barter, trade, and negotiation. Increasingly, their trade is in invisible ideas and abstractions, enhancing the sense that they have privileged knowledge and even “magical” powers. The journeys and tribulations of those who move to the island and struggle to succeed there are the stuff of legend, literally—there exists a long oral and written tradition about the supposedly indomitable and unique spirit of people who are able to “make it there.” Once they have established themselves on the island, it is said, they can “make it anywhere.”


On the whole, the island dwellers are the richest in the entire nation, living untethered from the environmental constraints that have such a profound impact on life-history courses in other habitats worldwide. Obtaining adequate calories for themselves and their children, the main ecological challenge to parents worldwide and throughout our evolutionary prehistory, is a simple given for wealthy island dwellers. However, as in many industrial and postindustrial societies, fathers of the very traditionally gender-scripted tribe I studied tend to focus on the job of provisioning their wives and families with less-tangible resources, including financial, social, and cultural capital. While many island-dwelling females work outside the home, during the childbearing and child-rearing years, many wealthy female islanders believe it is their “role” to remain home with their children, where they are often assisted by alloparents—individuals other than parents who take on parental roles. They call these alloparents “housekeepers,” “nannies,” and “caregivers.”


The island is organized, in the minds of island dwellers, into four quadrants: Up, Down, Right, and Left. The “Up” and “Down” areas are believed to be markedly distinct—with Up being preferable for raising children and Down being considered primarily a place for pre-reproductives, cultural “outsiders,” feasting, and ecstatic nighttime rites. Islanders further divide their island into left and right hemispheres. “Left” and “Right,” like “Up” and “Down,” are believed to have different—even polar opposite—characteristics. Left is believed to be more casual and progressive, in contrast to Right’s perceived formality and conservatism. --This text refers to the paperback edition.
Read more