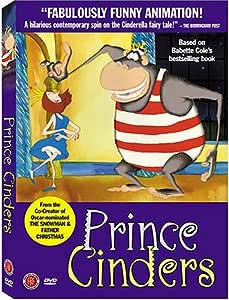 PRINCE CINDERS IS STUCK AT HOME DOING LAUNDRY AND HOUSEWORK WHILE HIS THREE MEAN, MACHO BROTHERS LIVE IT UP. BUT WHEN HIS MAGICAL GODMOTHER OFFERS TO TURN HIM INTO THE HE-MAN OF HIS DREAMS BUT ACCIDENTALLY TURNS HIM INTO A HUGE HAIRY APE.

4.2 out of 5 stars
4.2 out of 5
5 customer ratings
How does Amazon calculate star ratings?
Amazon calculates a product’s star ratings based on a machine learned model instead of a raw data average. The model takes into account factors including the age of a rating, whether the ratings are from verified purchasers, and factors that establish reviewer trustworthiness.
Top reviews

DJ Joe Sixpack
HALL OF FAME
4.0 out of 5 stars The humor is rather quite English
Reviewed in the United States on June 15, 2008
This is an entertaining and often funny gender-flipped parody of the old Cinderella story, and an interesting commentary on masculine gender roles. The production and the humor is very, very English, though, with concerns about "posh" society and an unexplained difference in accents between Prince Cinder's loutish brothers (working-class accents) and Cinder himself, who has a more generic, middle-class accent -- not quite an upper-crust toff, but certainly not a Cockney fishmonger, either. The British-isms may be lost on some non-UK viewers, but the main message comes through clear as a bell. (The loud sound design and clubby music are another matter altogether, but probably less of a problem for kids than for parents...) All in all, a nice, PC-ish reading of an old, old story. (ReadThatAgain kids' reviews)
Read more
Helpful
Comment Report abuse
See all reviews from the United States