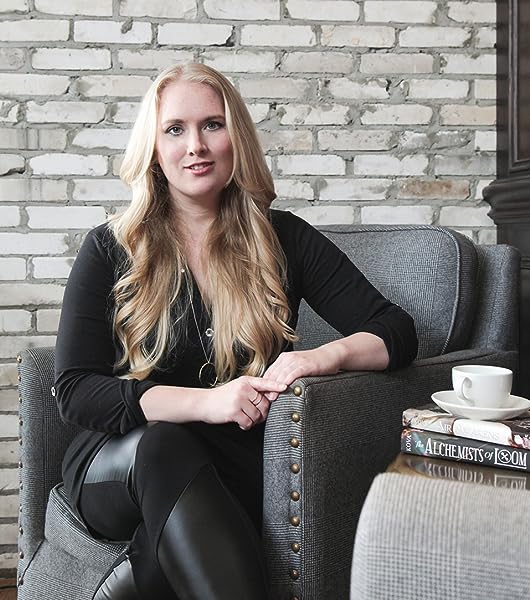 MAP
5.0 out of 5 stars Wonderful insight into the history of Wish Society and Snow/Jo
Reviewed in the United States on March 3, 2019
Verified Purchase
Elise Kova and Lynn Larsh delve into the origins of Snow, Jo, and the Society of Wishes in the short novella Prince of Gods. Although set before the first book in the Wish Quartet series and technically a prequel, I would recommend reading it after Birth of Chaos (Book 3) so the revelations in that book aren't spoiled (you can obviously read it any way you'd like though, I think the series would be great either way!) Without giving too much away, this book is a great introduction to Snow and the Age of Gods. You see Snow develop as an entity, with his personality taking shape in front of your eyes. He is far different than the cold and calculated leader of the Society of Wishes, but the underlying vulnerability is definitely there.

I read the novella to gear up for Age of Magic (Book 4), which will be released on September 20th. The Wish Quartet is a world rich in magic and history. It is like no other series I've ever read. I would highly recommend it.
Read more
Helpful
Comment Report abuse

L. R. W. Lee, Author (LRWLee dot com)
5.0 out of 5 stars 4.5 Stars!
Reviewed in the United States on September 12, 2018
Verified Purchase
I enjoyed getting this background of Creation, Destruction and Chaos and their relationship that was reveals in book 3. That said, I was a bit disappointed that Creation originally had no narrative about why his creators made him with no free will to not love Destruction. It went against the convention of every other character. Because that was the case, I really wanted to see more to
***SPOILER*** Creation coming to love Destruction on his own terms with a coherent story that included his free will. I know it is a novella, but it felt rushed as it is so critical to Creation's and Destruction's future relationship.
***END SPOILER***
All in all, a well done intro into the world of the Society and its origins. So on to book 4!
Read more
Helpful
Comment Report abuse

Misha
5.0 out of 5 stars A novella that solves a mystery...
Reviewed in the United States on September 18, 2018
Verified Purchase
From "Society of Wishes" onward the most puzzling plot line was the connection between Jo & Snow. It always seemed apparent that they had a prior relationship but it was never fully explained in the "Society". At least not in the beginning. But in the Prince of Gods we finally get to see their story. Of who Jo really is & the sacrifice she made, & the burden Snow carried for all these centuries.

And while I have come to expect a 5* read out of everything Elise writes, I am still taken aback every time I read a new book she puts out. It's always more gripping than the last, and depth of the story and the characters is just mind-blowing. If you're not familiar with Elise's work, I'd encourage you to pick a book, any of her books and dive on in
Read more
Helpful
Comment Report abuse

Utopia State of Mind
4.0 out of 5 stars O M G
Reviewed in the United States on October 12, 2018
Verified Purchase
Wow this messed with my mind so much! It's a great companion novella, but to get maximum, OMG moment, read in publication order. After you've invested so much time in the series, your jaw will drop.

If you read it before that, it'll make the entire series, just one more OMG moment after another, which is totally fine too, you'll just wait for that other shoe to drop.
Read more
Helpful
Comment Report abuse

Nhite
5.0 out of 5 stars Perfect addition to the series!
Reviewed in the United States on September 17, 2018
Verified Purchase
I wasn’t sure what to expect from this prequel but I saw the note from the authors in book 4 recommending reading this beforehand and I’m so glad I did! It cleared up a lot of answers I had and really helped you see a better picture of the series as a whole. I think reading it after book 3 is the absolute perfect time to read it.
Read more
Helpful
Comment Report abuse

M. Fritz
5.0 out of 5 stars Intriguing
Reviewed in the United States on November 7, 2018
Verified Purchase
This was very interesting. Seeing how the plot played out was extremely entertaining! I had no idea how this would end. With surprising twists and turns this will keep you turning those pages. It's the first that I've ever read from either of these authors. I'm curious about their individual writing styles!
Read more
Helpful
Comment Report abuse

Emmie
4.0 out of 5 stars Great addition to the series
Reviewed in the United States on April 1, 2019
Verified Purchase
This novella is a prequel to the Wish Quartet. It explains a lot.
Read more
Helpful
Comment Report abuse

Stephane Taylor
5.0 out of 5 stars Intriguing start!
Reviewed in the United States on September 12, 2018
Verified Purchase
This was a really interesting start to what I hope will be a great series! I've already bought the rest in paperback after reading this.
Read more
Helpful
Comment Report abuse
See all reviews from the United States

Kindle Customer
4.0 out of 5 stars Prequel or companion story? It's up to you...
Reviewed in the United Kingdom on August 22, 2019
Verified Purchase
Gods and Goddesses of ancient mythology, but not as you know them. This prequel to the Wish Quartet served as an interesting lure into a world where power is always balanced precariously. It's very much a YA fantasy with a bit of semi-steamy romance added to the mix, and you don't need to have read any of the main series to understand the plot (the last chapter being the only exception).

The pacing is really set in such a way that it draws you along. Creation may be a silly love-struck boy, but his naivety is part of what makes him a relatable character. It's a sort-of coming of age tale, where an innocent must learn the darker ways of the world. The twist on the mythology is well done, the settings and side characters interesting enough without being overpowering or underwhelming.

The not so good would be that central "romance". I understood why Creation felt that way, but what of Destruction? How she just insta-loves him is a bit iffy when she's set up to be this strong, independent character. There's not a great deal of chemistry. There's also the ending that just felt like it was written to squish in to what had (presumably) already been set up in the main series.

The last chapter is where it falls down as a new reader's prequel: it's obsessed with mentioning each and every character and their interactions even though a new reader has no idea who they are or their significance. I was a bit disturbed how the main characters suddenly sounded like petulant American teens rather than ancient beings in charge of a big supernatural organisation, so maybe that's a change in tone that reflects the main series.

Either way, it's an assured piece of writing and certainly intriguing enough to make me curious about how Creation, Destruction and Chaos' story plays out across the ages.
Read more
Helpful
Sending feedback...
Thank you for your feedback.
Sorry, we failed to record your vote. Please try again
Report abuse