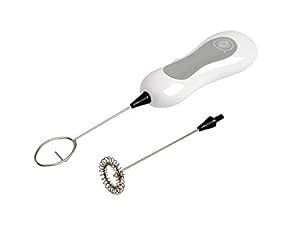 Visit the Prince Lionheart Store
4.1 out of 5 stars 1,120 ratings
| 5 answered questions
Currently unavailable.
We don't know when or if this item will be back in stock.
› See more product details

The Versa Formula Mixer is a dual purpose tool perfect for a family. Two interchangeable attachments in one: the first blends formula or other powdered drinks inside a bottle, while the other is perfect for frothing milk in coffee drinks. Easy to use and clean, this convenient gadget is a great addition to any kitchen or on the go lifestyle. Two AA batteries required.

4.1 out of 5 stars
4.1 out of 5
1,120 global ratings
How are ratings calculated?
To calculate the overall star rating and percentage breakdown by star, we don’t use a simple average. Instead, our system considers things like how recent a review is and if the reviewer bought the item on Amazon. It also analyzes reviews to verify trustworthiness.
Top reviews

Christopher D. Hardtke
5.0 out of 5 stars Worked flawlessly so far
Reviewed in the United States on May 29, 2013
Verified Purchase
Tired of the lumps and clumps in my drinks, I wanted a simple mixer for powdered beverages such as instant cocoa and instant chai. I decided on a battery powered one because of their small size and not a lot of power was needed. Fortunately, all these mixers are pretty affordable, usually under $10, so I was only faced with which one out of a half-dozen or so to buy. Based on reviews I chose the Prince Lionheart Versa mixer and have been extremely satisfied with my decision.

Powdered beverages are mixed quickly and thoroughly. The spinning action is very efficient and creates quite the vortex, you actually feel the unit getting drawn down into the spinning whirlpool. The mixing is nearly instantaneous, 3-5 seconds is generally all I've needed. You can operate the device in a pulse mode, or press the button a little firmer and it will stay in the on position. The difference between these two button positions is very slight, and lots of times I find myself locking it into the on position as opposed to the pulse, but I see no reason why this will be problematic, just make sure to push the button again before taking it out of the liquid!

Prior to using the device, I'd found that most powdered beverages were harder to dissolve in cold liquids as opposed to hot liquids, but this mixer powers through regardless of the temperature of the beverage. Just to experiment I tried it on liquid chocolate syrup in a glass of milk, and the mixer handles syrups just as well as it does powders.

I had never used a frother before, so I wasn't sure of what to do with this attachment as no instructions for using the attachments come with the unit. As an experiment, I poured about a half inch of milk into a glass, inserted the frother, moved the unit up and down and in 15 or 20 seconds had created my first froth! It worked very well, and is pretty fool-proof, even if you don't know what you're doing.

So far after more than two dozen uses I've had no problems with it, the battery compartment lid seems secure, and the wand has never shown a sign of coming loose or off altogether while mixing. I paid about $7 for this via Amazon, and now knowing how well this functions, I would easily pay twice the amount for this handy little gadget.

Nom De Plume
4.0 out of 5 stars Much Better Than The Other One
Reviewed in the United States on April 28, 2013
Verified Purchase
This is built a lot more with quality than the cheap Chinese quick mixers. The motor seems to be much more powerful. The only thing is the mixer vibrates because the attachment is off balance that sometimes can be fixed by tapping it or holding the attachment by the stem between two fingers as it spins and then it spins perfectly with no vibration till you stop it and it must be redone again. Works most of the time.

I do not know if it is designed to spin out of balance for a vibrating effect to further enhance the mixing process with the attachment design. This happens on both attachments. One is a mixer the other is a milk frother. It does not come with an assortment of attachments like the cheap knock-offs. Some have up to 4 different types of mixers. This one only has two.

The milk frother seems to work but I don't really use it. I have had it for a couple of months and will see how it hold up. The cheap Chinese knock-off began to work erratically after 10 months then the switch came off and have been using it bare till it finally wouldn't work anymore after 18 months.

The switch on this machine has two modes, pushing gently activates the temporary on and pressing it down harder locks the on switch for hands free use. I find the first mode way too sensitive and it locks the on switch too easily complicating things and sometimes making a mess. I think it is a manufacturing error. Because it is made as a convenient quick mixer it really does not need a locking on/off switch. It would IMO work better if it did not have this feature. I often need to turn it on only for a few seconds with some mixes in a small glass.

The other thing is with water mixes the motor really churns easily and one has to be careful. But on thicker drinks like milk protein mixes I was surprised the motor gets bogged down easily but it will still mix it. So these things have high RPM but little or no torque.

It comes in a quality clamshell packaging instead of those paper thin card box typical of the cheap Chinese knock-offs.

60 DAY UPDATE: IT IS A BATTERY EATER! After about 7-8 weeks the battery needs replacing. I use alkaline batteries. The mixer is used maybe 25 out of 30 days for a couple of seconds of daily quick mixes.
Read more
One person found this helpful
Helpful
Comment Report abuse
See all reviews

Mrs B
2.0 out of 5 stars Not he greatest!
Reviewed in the United Kingdom on October 12, 2017
Verified Purchase
This lasted us for all of about two weeks before it lost all its power, even changing battery didn’t work. The accessories are hard to take off also. The concept I.S great just a shame ours didn’t last long.
Read more
One person found this helpful
Report abuse

g f
1.0 out of 5 stars Don’t bother
Reviewed in the United Kingdom on February 20, 2020
Verified Purchase
The formula mixer just creates air bubbles in the bottle. I had to stop using it after 2 days as it was giving my new born bad wind. I used the froth fitting twice and all it did was put cappuccino all over my walls. Worst of all I had to buy these in a 2 pack.
Read more
Report abuse

Anna
4.0 out of 5 stars Godsend!
Reviewed in the United Kingdom on November 1, 2014
Verified Purchase
I needed something to mix prescription formula milk powder, as the instructed way of making a bottle produced a bottle full of bubbles, with clumps of undissolved powder! This has made things so much easier, it mixes the milk powder very quickly, only needs a few bursts with none or only a few undissolved bits remaining. Also very easy to clean & the whisk attachment is very handy for hot chocolates, milkshakes or cappuccinos. Really happy with it.
Read more
One person found this helpful
Report abuse