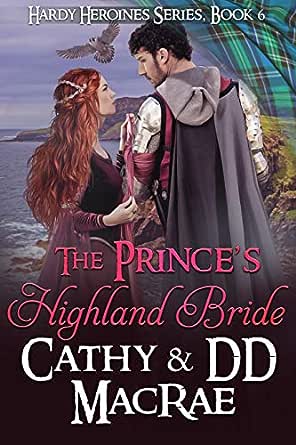 You've subscribed to Hardy Heroines! We will preorder your items within 24 hours of when they become available. When new books are released, we'll charge your default payment method for the lowest price available during the pre-order period.
Update your device or payment method, cancel individual pre-orders or your subscription at
Your Memberships & Subscriptions
There was an error. We were unable to process your subscription due to an error. Please refresh and try again. 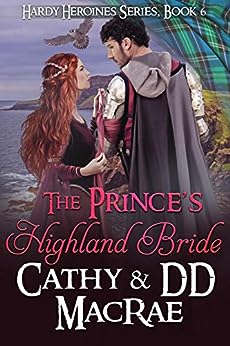 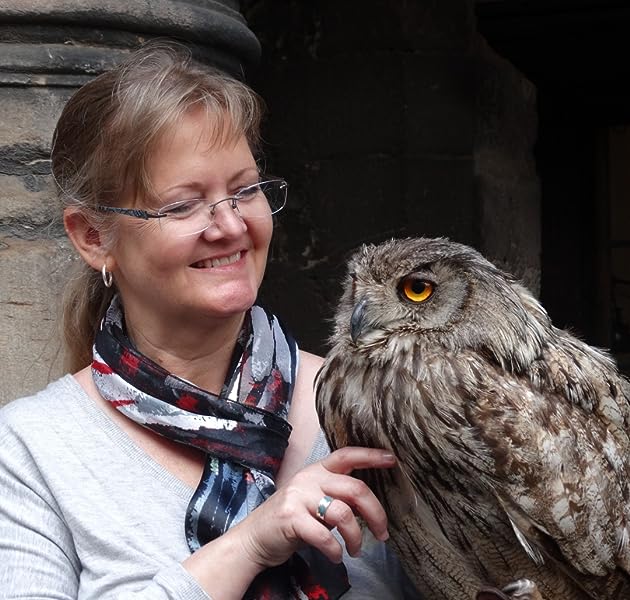 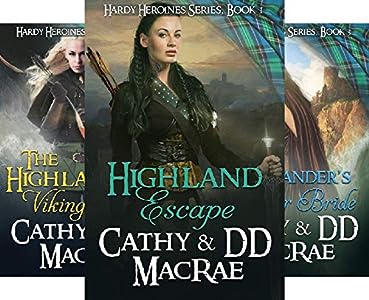 Phillipe of Antioch, the son of Bohemond IV, was a real person. Chosen to play a role in The Highlander's Crusader Bride, he became more to us than an unfortunate victim of politics and court intrigue. At first glance, research told us he was destined to meet his fate in the dungeons of Cis Castle. As we dug deeper, we wanted to know, What if . . .?

Cate Parke
5.0 out of 5 stars Excitement, Intrigue, Heartbreak, and Joy--All Between the Covers of One Book
Reviewed in the United States on June 1, 2020
Verified Purchase
If you read just one book this summer, it must be The Prince's Highland Bride. The book is well researched and offers a substantial taste of the early 13th century.

Phillipe, the son of the King of Antioch, arranged for Phillipe to marry the Queen of Cilesia. He became a popular king nearly immediately, but political animals sought to end his reign. Near tragedy followed, and he realized he'd been tossed into a pit with very hungry snakes. After managing to escape the vast dungeons of Sis Castle, having lost everything he'd once valued, Phillipe departs the Holy Lands and makes his way to Scotland, meeting a man known as Balgair, and who became a close and trusted ally and friend.

Maggie MacLaren survived what became a loveless marriage that eventually threatened both her freedom and a near loss of life--all because she'd been pronounced infertile. In addition to the disgrace her abusive husband left her with, he declined to return her dowry in return for the title of a tiny, likely worthless isle in the Hebrides. How does a strong, independent woman deal with the accusations made by the Earl of Mar? She returns to her beloved Highlands of Scotland and her family. Trouble arises and Maggie determines to travel to her isle to make a life for herself. Hold onto your hats. What ensues will take your breath away.

This isn't my first look at the book--nor even the second. I am one of the critique partners mentioned in the book's acknowledgements. In addition to all my suggestions and corrections, I offered praise to Cathy for the excellent writing and storytelling. I have quite a few favorites among her books, but this is the best one yet. I repeat--don't miss this book.

Lorrie
4.0 out of 5 stars Two people scarred by betrayal find a way to trust one another and heal.
Reviewed in the United States on June 6, 2020
Verified Purchase
I love these authors' writing, this one was bit slow-moving for me. I loved the fact that both of them had a past where family had betrayed them and by coming together and learning to trust one another gave them the healing they so desperately needed.

A former Prince, giving up his past and a woman shunned, embark on an adventure that would change their lives forever. He was wrongfully imprisoned and barely escapes with his life. Once free he must sell his sword to survive and vows to never look back.

Maggie was tossed aside, returned to her family because the man she was forced to marry blamed her for not giving him an heir. But once she arrives home, she feels unwanted there as well so she's determined to take the one thing she had left in life and make her own future. With the separation from her husband, he gifts her with an island and she is determined to go to that island and build a small cottage where she could live the rest of her life alone. Thankfully, fate brought her and the Prince together and the friendship blended into something much more. I think this was a story of bonding, healing, and a HEA kind of love.
Read more
Helpful
Comment Report abuse

Sherry Tritt Holton
5.0 out of 5 stars Strong women
Reviewed in the United States on May 25, 2020
Verified Purchase
It still amazed me that women were treated like cattle and I guess it makes me feel bad that they had to go through all they did.
The original storyline and the in depth characters are what makes this story great.
Read more
One person found this helpful
Helpful
Comment Report abuse

Dianne
5.0 out of 5 stars Can a woman beat all odds?
Reviewed in the United States on May 17, 2020
Verified Purchase
A wonderful story about a warrior woman who was divorced because she supposedly could not have children. How she took the land she was given and protected it.
Read more
One person found this helpful
Helpful
Comment Report abuse

Celtic Barb’s Kilted Review Blog
5.0 out of 5 stars Another Breath taking Hardy Heroine breathtaking adventure that readers will love!
Reviewed in the United States on May 9, 2020
Book:The Prince’s Highland Bride
By Cathy and DD MacRae

Prince Phillipe de Poitiers is the Prince of Antioch. He is forced by his father, into a political marriage to a foreign nine year old Queen of Cilicia, in the Mediterranean (Turkey). Due to others not accepting their union, including the new foreign King not accepting all their ways especially he not converting to their religion some evil characters him replaced. He finds himself in a dreadful circumstance, as he was framed for a serious crime that he never committed! The punishment for this false crime is death. He is about to be wrongfully executed, being a member of the monarchy will not save him. As this nightmare is one horrific mistake! Now he must escape from everything he cares about his family, country, and title. Due to his families political allies, his child wife’s safety and other dangerous reasons he must appear dead to them forever. Though he is relieved to be away from all the dangerous shenanigans and intrigue of Mediterranean court life. He keeps thinking of a more content and joyful time in his past. This includes a one sided lost love in Scotland who once owned his heart. To be able to get to his destination having no coin he must sell his sword. Now his new journey to Scotland begins.

Maggie has been married to the Earl of Mar, a brutal, unfaithful, uncaring, selfish, man. He just throws her away like a piece of garbage! All because she didn’t have a baby in their first year of marriage. Accusing her of being barren never blaming himself of course as it is always the woman’s fault according to the Earl of Mar and his nasty mother! He steals her dowry and gives her land on the remote Hola isle. It is near the western coast off the Ardnamurchan, but is probably worthless.

Then after this mistreatment and her own mother is not even very welcoming which was very extremely hurtful. Maggie feels coming home has no direction. Men make sexual offers, thinking she is an unwanted used wife, can be a mistress or worse and open for the taking. Plus these men don’t have to worry about unwanted pregnancy since she is supposedly barren. Now the women whisper about their bairns behind her back. This is another subject that makes Maggie uncomfortable, inadequate and heartbroken. She feels like a total failure as a woman for both her family and clan. On top of that one is obsessesed with her, which brings war to her clans door. It targets her clan, harming both her brother and father so she must leave home Narnian Castle, in Loch Lomond for their safety and go to this isle.

Maggie feels this is the right to do, her family worries that dark seeded characters like pirates and Vikings might occupy this isle. So they feel she needs a guard since their is no husband or male family member to protect her.

Now Phillipe de Poitiers is granted a job to make some coin from Laird MacLaren of Loch Lomond hired to check out the isle his daughter wants to live on. He also by becoming a guard to Laird MacLaren’s daughter Maggie, the former Lady of Mar. The attraction is immediate but many dangers occur too with this couple on this couple. Island raids, and pirates that could could put their very lives in danger.

Will Maggie open her heart and trust this man plus will they even survive as danger is on their tail. Can Phillipe open his heart again when he had nearly been killed by previous decisions and manipulations??Read and find out what the conclusion will be.

This is the sixth book A fast paced, page turning, riveting, romantic, adventure, filled with murder, raiding, mystery, treachery, attempted abduction, deception suspense, betrayal, faith, joy and love. all the elements Scottish historical readers enjoy. Another breathtaking setting with a captivating dialogue and multi dimensional characters. Yet the plotting just blew me away! Fans of the Hardy Heroine series will recognize appearances from favorite characters from this series too. A bit of a character reunion which is always heartwarming to see!

This book is definitely a must read that you can read as a stand alone book. I absolutely highly recommend this phenomenon book,

Disclaimer: I received a gift copy from the author for a fair and honest review. I voluntarily agreed to read, review and blog All words, ideas and thoughts are my own.
Read more
One person found this helpful
Helpful
Comment Report abuse
See all reviews

Kindle Customer
5.0 out of 5 stars Enjoyable
Reviewed in Canada on May 15, 2020
Verified Purchase
I would have to say that I enjoyed this story very much indeed
It was certainly very exciting and kept me interested from the beginning until the end
Read more
Report abuse
See all reviews