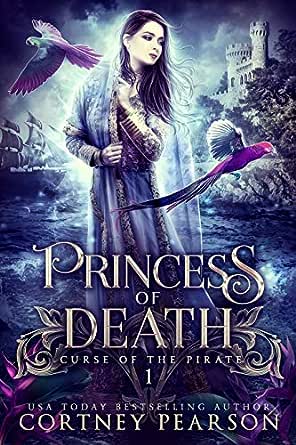 You've subscribed to Curse of the Pirate! We will preorder your items within 24 hours of when they become available. When new books are released, we'll charge your default payment method for the lowest price available during the pre-order period.
Update your device or payment method, cancel individual pre-orders or your subscription at
Your Memberships & Subscriptions
There was an error. We were unable to process your subscription due to an error. Please refresh and try again. 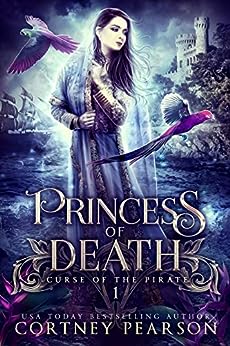 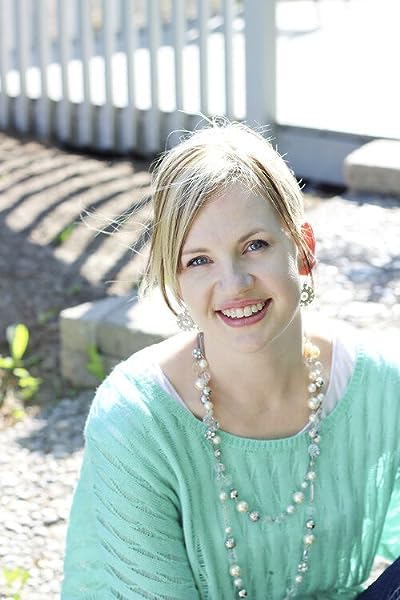 Princess of Death (Curse of the Pirate Book 1) Kindle Edition 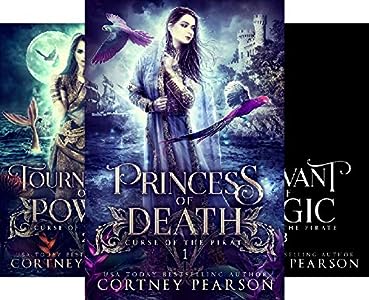 "I highly recommend if you like fantasy, adventure, andalso magic, all rolled into one." - Lynnzie6268, a Kindle reviewer★ ★ ★ ★ ★

"There's deception, intrigue, a hint of romance, and alot of betrayal with a feisty main character and a devilishly suave pirate thatmay capture your heart, but could also throw it right back at you."-GeorgiaP, a Kindle reviewer ★ ★ ★ ★

This was so opposite from the side of him he'd shown her. He'd been kindness and civility while indulging in her games, escorting her to magical, midnight gardens.
This was another part of him.
This was the pirate, not the gentleman.
--This text refers to the paperback edition.

GeorgiaP
4.0 out of 5 stars A feisty princess and a suave pirate. What's not to like?
Reviewed in the United States on December 14, 2018
I received a free arc for an honest review. The blurb struck my fancy as soon as I read it and I couldn't help but ask for a copy. I debated so hard on how many stars to give it. So hard. I wanted to give it five stars but the beginning was a little slow. At least it was to me. It picks up more around 30-40% of the book when Cali embarks on her quest. I will say this, this book both did and didn't end up what I thought it would be and if you know me, you know I can easily predict where things are going to end up. That whole thing with Bae reminded me of the first season of OUAT when Captain Hook was introduced. Like do you love him or hate him? Both? He's suave in that way that pirates are often portrayed as but like a lot of pretty boys, there's just that nugget of doubt saying that he's only going to hurt you. I'm not even sure where my feelings stand regarding Bae. I'm not even sure where they stand for Cali. I definitely do know that I kind of don't like Soraya. Maybe not even a little bit. I don't know. I'm still processing it. I'm going off on all kinds of tangents. Sorry. The point is, read the book. There's deception, intrigue, a hint of romance, and a lot of betrayal with a feisty main character who can stand on her own two feet with the slight but subtle air of pompousness that goes with being groomed as a princess and a devilishly suave pirate that may capture your heart but could also throw it right back at you.
Read more
2 people found this helpful
Helpful
Report abuse

Ashlee L.
3.0 out of 5 stars Was really torn between 3 and 4 starts
Reviewed in the United States on September 22, 2019
Going in to this book, I was really interested by the concept of the book. I like to discover new, original plot lines and this is definitely that. You follow Princess Caliana "Cali" Brahmvir across the boundary with the help of some magic (which is frowned on in her kingdom) to get plants needed to brew a cure for a plague that is overtaking her land. When she's whisked away, she gets caught in the dangers facing another kingdom and the antics of a devilishly handsome pirate prince.

My biggest critiques with the book included how slow it was to get started. There were a lot of unique names for people and kingdoms so it's a lot to take in when you first get started. I will say that it really did pick up when Cali went to Lunae Lumen, the other kingdom and especially when she met Bae, the pirate prince. I don't think this was a terrible book overall, but there were times where I felt disconnected from the plot. Like I wasn't sure where things were going. This is book one in a series, so there wasn't much of a resolution so I may continue reading on to see more of how the story progresses. Again, I was torn between 3 and 4 stars. 3 felt too little but 4 felt too much. Let's say 3.5. I voluntarily reviewed this after receiving a free copy.
Read more
One person found this helpful
Helpful
Report abuse

Jo
5.0 out of 5 stars A simple, but beautifully told fantasy romance - 4.75 stars
Reviewed in the United States on September 22, 2019
Preface: I received a free copy of this book in exchange for an honest review.

This book was genuinely enjoyable, which isn't something I get to say very often. The prose was gorgeous. The characters were fleshed-out and likable. The set-up for the plot is a little hackneyed (and it sounds like the same is true for the sequel), but I didn't mind. The world is unique and interesting, from the divided sea, to the little touches here and there (magic, the rove, finfolk, etc.). There is a hateable villain (who will hopefully get more motivation in later books), but the other characters are understandable, even if they're antagonists. And, best of all, while this is obviously a set-up to a trilogy, it tells a coherent story all on its own. We see Cali take responsibility for her actions and her people, and do her best to fix it - and even if the end result isn't quite what we'd hoped for, it still feels as though the journey we've gone on has been worthwhile, and not just empty lead-up to something more fulfilling.

(Also, I really love the names throughout the whole story. They have a really pleasant blend of that elegant fantasy feel without ever quite being overdone.)

I do have a few quibbles here and there - just little things that don't quite make sense, like the ecology between the two lands being so different even though they're apparently only a few days apart (although the timeline might have gotten fudged because magic). There's a love triangle, which I'm not generally a fan of, but it's passable here because both love interests are genuine and likable people, not just cardboard cut-outs or obviously evil. Again, there are a lot of dangling threads, but I'm curious to see if these actually end up being wound together somehow. I would have liked a little more fleshing-out of some of the background characters - Vera is the biggest example, but also Roland and maybe Ayat - but we might get that in the future. Ultimately, it's a little hard to judge the flaws of this novel without knowing what will come next. But I will definitely read the next book, and (hopefully) the third.
Read more
Helpful
Report abuse

Lynnzie6268
5.0 out of 5 stars A great adventure book and quite enjoyable to read
Reviewed in the United States on February 24, 2019
This is one book that you want to read and though it started off a bit slow at first, you'll soon get the hang of it and it actually captivates you as you go deeper into the story. I liked the main characters too, particularly Princess Cali. She was a good hearted princess, who takes her responsibilities seriously and who stands with her people, when all of a sudden her kingdom was hit and devastated by a plague especially with her childhood friend Darren whom she truly love since they were kids. The only cure is via magic so she had to embark on a journey to discover where this magic healing is and along the way, she met the handsome and swash buckling hero, the pirate Bae who also have some dark secrets on his own and thus the adventures begin. I really enjoyed this 1st book so far, a lot of interesting twists and turns and also a bit of mystery, romance and also dark evil magic as well. I'm quite excited for the next phase of this great quest that they'll be doing and I'm looking forward to the 2nd book of the series, coming very shortly. Over all, I highly recommend this book especially if you like fantasy, adventure and also magic, all rolled into one. ---This is an ARC copy with my honest review.--
Read more
One person found this helpful
Helpful
Report abuse
See all reviews