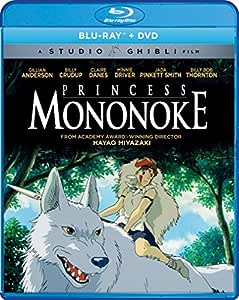 From the legendary Studio Ghibli, creators of Spirited Away, and Academy Award-winning director Hayao Miyazaki, comes an epic masterpiece that has dazzled audiences worldwide with its breathtaking imagination, exhilarating battles, and deep humanity.


Inflicted with a deadly curse, the young warrior Ashitaka heads west in search of a cure. There, he stumbles into a bitter conflict between Lady Eboshi and the proud people of Iron Town, and the enigmatic Princess Mononoke, a young girl raised by wolves, who will stop at nothing to prevent the humans from destroying her home, and the forest spirits and animal gods who live there. Featuring the voices of Gillian Anderson, Billy Crudup, Claire Danes, Minnie Driver, Jada Pinkett Smith, and Billy Bob Thornton.

4.9 out of 5 stars
4.9 out of 5
3,685 global ratings
How are ratings calculated?
To calculate the overall star rating and percentage breakdown by star, we don’t use a simple average. Instead, our system considers things like how recent a review is and if the reviewer bought the item on Amazon. It also analyzes reviews to verify trustworthiness.

Jar
1.0 out of 5 stars English version and original are sold Separately
Reviewed in the United States on December 19, 2019
Verified Purchase
Didnt think to check audio as most digital releases are multiple languages but in a new scummy marketing tactic gkids has separated them for a $20 price tag on each.
Read more
33 people found this helpful
Helpful
Comment Report abuse

MrTwoNine
5.0 out of 5 stars A collaboration that resulted in a marvelous Blu ray package!
Reviewed in the United States on May 31, 2019
Verified Purchase
Distributor Shout! Factory and GKIDS have partnered together to release a very special limited collector's edition of "Princess Mononoke" on Blu-ray.

Summary: "Princess Mononoke" focuses on Ashitaka, a young warrior who is exiled from his village because of a deadly curse. In search for a cure, Ashitaka sets out on a journey, hoping to find any answers he can. During his travels, however, he stumbles upon a long standing fued between Lady Eboshi of Iron Town and Princess Mononoke of The Forest. Two different ideologies clashing for control. One fights for her people, while the other fights for the forest and it's inhabitants. Yet, both seeking to kill one another. Not wanting blood to be shed, Ashitaka takes it upon himself to search for a path in where both leaders can coexist. All the while still battling the curse within himself.

• The collector's edition is a dream!

• Includes a 40 page art book with behind the scenes/extras and special features for fans.

• As someone who prefers watching anime in Japanese rather than the dub. I can gladly say that the dub version is up to standards. You will not be disappointed, the dub is great!

• The picture quality of the Blu-ray looks phenomenal! Even though "Princess Mononoke" came out almost 20 years ago, it's still a marvel to gaze upon. Makes you miss the classic cel animation art style.

• The slipcase is bigger than most Blu-rays. Meaning that it will not align properly to the rest of your collection. This will annoy those who enjoy a more uniform appearance.

• The film can be a bit violent for children. There isn't nudity or any vulgar language but there is blood. So if you wish to show your kids maybe wait until they're a little older. Eight maybe nine years of age, but it's really up to you.

• The soundtrack doesn't play on the PlayStation 4. So if that's your main media source then you're out of luck. This isn't a problem with the collector's edition but more so the PlayStation 4. Just something I felt needed to be said.

Bottom line "Princess Mononoke" is a gorgeous, depth filled, spectacle. The characters are interesting and driven which makes for an exciting story. A must watch for both anime fans and the average movie audience. Hands down one of the best anime films created by Hayao Miyazaki. I highly recommend owning this film. (A personal favorite :D)

Eric Von Zipper
4.0 out of 5 stars Butchered Credits. Otherwise OK.
Reviewed in the United States on January 18, 2020
Verified Purchase
No, folks. Gillian Anderson and Billy Bob Thornton were not voice actors in the original release. Truth be told they were not really voice actors in the US release either. They just sat in a booth, emotionless, and read some lines off a script. Luckily, the Japanese soundtrack is included so you can hear it as it was originally presented with real voice actors.

The Blu-ray looks and sounds good. Good but not great. Not bad. G Kids did a decent job. But they replaced the Japanese credits with English. I hate it when they do that. Why do they have to do that? Oftentimes these days, the original credits are left intact and the English credits are presented afterwards. It's a much more respectful presentation and G Kids should have done it with all of their Ghibli releases. It's a nitpick but it really takes the wind out of the sails at the end of the film for me.

Overall, it's an OK release and it serves it's purpose in my collection. If a release more faithful to the original is released stateside, I'll probably get it to replace this copy.
Read more
13 people found this helpful
Helpful
Comment Report abuse

Aleister Browney
5.0 out of 5 stars A Groundbreaking Masterpiece
Reviewed in the United States on July 13, 2020
Verified Purchase
I came late to the party for appreciating Miyazaki's brilliant films, and this was the one that got me hooked. Princess Mononoke is one of those rare films that allows the audience room to decide for themselves. In this review I could extol the amazing animation, fantastic voice acting from both the American and Japanese casts, or the captivating original story, but I'd like to keep things short and simple and praise the masterful handling of the themes.

Princess Mononoke tells the story of a man who ventures from a distant land to two warring nations in search of a cure for his demonic ailment. He admonished by the village elder before going forth with this message "You must see with eyes unclouded by hate. See the good in that which is evil, and the evil in that which is good. Pledge yourself to neither side, but vow instead to preserve the balance that exists between the two." The idea here is that a third party is going to offer an impartial perspective on a conflict between two others. What we discover from this perspective is a lot of grey. One of the conflicting parties is run by a matriarchy who runs a society that on the surface appears to be inclusive and progressive. Women are highly regarded for their ability to contribute to the stability and efficiency of the village while the men help in hunting and gathering resources. Even the disabled and social outcasts have a place of respect in this society as weapon makers. The issue lies in their disrespect and exploitation of nature and those who dwell in the forest. Miyazaki's deft ability as a storyteller though doesn't pigeonhole this movie in the long line of environmental preservation films. He puts forth the other sides valid points of how using nature has created jobs, societal progress, security and stability for the workers and their families. It is the great quandry that we still struggle with today. We need nature but we need progress. How do we balance our needs with the preservation of nature?

The brilliance here is Miyazaki doesn't force a viewpoint down the viewers throat. He understands that this is a complicated subject and that both sides have valid points for their ideas. Therefore the question is passed off to the viewer on how to establish harmony between the two sides without simply pushing for one over the other. The singular feature of Miyazaki's storytelling is that it respects the intelligence of the audience and doesn't take the position of preaching for any agenda. Ideas are seamlessly crafted into the narrative in such a way that it doesn't seem ham fisted or painfully obvious. Mixing social issues with a story without coming off as preachy or transparent is no easy task for even the greatest of filmmakers, but Miyazaki is an expert in a league of his own. You cant go wrong with Mononoke or any of his wonderful films. Pick it up.
Read more
5 people found this helpful
Helpful
Comment Report abuse

Amazon Customer
5.0 out of 5 stars Love the Movie
Reviewed in the United States on December 20, 2018
Verified Purchase
I have no complaints about this product. If you're a Princess Mononoke fan, this product won't disappoint. I bought it as a birthday or Christmas present for my boyfriend. We both love Studio Ghibli and are building a personal collection. It's been a long time since I bought this one specifically, but I like having both the DVD and Blu-Ray option. The Blu-Ray beautifully brings out a more detailed picture. The same is true for the Howl's Moving Castle Blu-Ray which I also purchased.
Read more
10 people found this helpful
Helpful
Comment Report abuse
See all reviews

Lepus Aquaticus
4.0 out of 5 stars Girl Who Rides With Wolves
Reviewed in Canada on August 15, 2018
Verified Purchase
This movie is iconic--an award-winner & for a lot of good reasons. Billy-Bob Thornton, who did the English-language voice-over, commented that one gets so absorbed in the story-line ( & so invested in the several characters) that "...you forget it's animated...".
Read more
One person found this helpful
Report abuse

K. K Slider
5.0 out of 5 stars Beautifully transferred from masters to blu-ray; great audios and extras
Reviewed in Canada on March 5, 2018
Verified Purchase
Excellent video transfer. Even the included 1999 interview with Miyazaki and his little Film tour around North America is in crystal clear HD!

A classic film that represents Japanese Film (Miyazaki doesn't like the word anime or TV Anime...so don't use those words!)

F
5.0 out of 5 stars Amazing movie & soundtrack!!
Reviewed in Canada on January 28, 2020
Verified Purchase
Mother Nature is important! Princess Mononoke box is one of the most beautiful movie and music that we have added to our collection! Movie is intense but with such powerful message to our generations!
Read more
Report abuse

Makoto Nagano
5.0 out of 5 stars A unique story filled with imagination and action
Reviewed in Canada on January 8, 2020
Verified Purchase
Beautifully crafted animation. Unique plots and storyline. Filled with imagination as usual but also with actions. It instantly became a favorite of a 6-year-old boy.
Read more
Report abuse
See all reviews