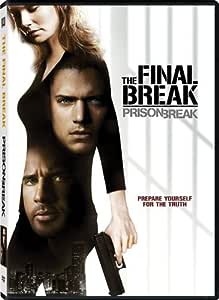 The federal government cant touch Michael Scofield, so theyre going after the woman he loves. When Sara is arrested for murder, only Michael can rescue her and their unborn child from an impenetrable womens prison. With a price on Saras head and time running out, Michael must rely on his deadliest enemies to help attempt the most daring breakout ever. Combining white-knuckle intensity with jaw-dropping action and suspense, this is Prison Break like its never been seen before.

4.7 out of 5 stars
4.7 out of 5
1,055 global ratings
How are ratings calculated?
To calculate the overall star rating and percentage breakdown by star, we don’t use a simple average. Instead, our system considers things like how recent a review is and if the reviewer bought the item on Amazon. It also analyzes reviews to verify trustworthiness.

Mike S.Top Contributor: Star Wars
TOP 1000 REVIEWER
4.0 out of 5 stars An alternate end to the original series (Season 4 and minor event series spoilers)
Reviewed in the United States on April 9, 2020
Verified Purchase
+++Warning, this will contain spoilers from the fourth season of the show as well as a minor spoiler for the fifth season/event series that aired in 2017. ++++

This is an hour and a half long TV movie that aired a few weeks after the series finale, showing the events that occurred between during the time that passed in the time jump where it was revealed the Michael was dead. The basic story is that Sara is arrested for the murder of Michael's mother and thrown into a women's prison in Miami. The general sets up a hit on Sara, Michael finds out and springs a plan to break her out. Most of the major characters that appeared in the fourth season (Sucre, Malone, Lincoln, and T-bag) also appear in this. Jodi Lynn O'Keef also reprises her role as Gretchen and gets a better sendoff than she got during the "main" episodes of the fourth season. Lori Petty plays the main antagonist for Sara in the women's prison. There is not really any setup for the storyline that would play out in the event series where it is revealed that Michael faked his death, aside from the fact that his death is never shown on screen.

The Blu-Ray is fairly bare-bones. The A/V quality is akin to the series releases, and the only extra is about four minutes of deleted scenes. There is no making-of feature, no commentary track, etc. That knocks it down a star for me, but overall, it gives a decent, but a somewhat unnecessary alternate ending to the original series run. Personally, I think the ending to the fourth season was a fine ending without any further explanation, regardless of whether the event series was ever made.

jporterk
3.0 out of 5 stars We were avid watchers of the Prison Break series and ...
Reviewed in the United States on April 29, 2017
Verified Purchase
We were avid watchers of the Prison Break series and we're still not sure how we missed this movie. It's a critical part of the collection and if you haven't seen it and you're watching the new season, then this might help clear up some confusion. There isn't much to the movie, though. Not a lot of twists, not even much of the typical mystery surrounding Michael that keeps the audience guessing about how many "chess moves" he is ahead of his adversary. It's more just a gap filler between the two seasons. I doubt it would have even provided a tremendous sense of closure had we watched it when it originally aired.
Read more
5 people found this helpful
Helpful
Comment Report abuse

safer
5.0 out of 5 stars The best of the best
Reviewed in the United States on November 2, 2019
Verified Purchase
What can I say, this show is beyond perfect. It’s excellent, I love it, I don’t think there is a show better than prison break. Prison break was perfect from season one to season four and to the final movie of the final break. Took me eight years to keep believing that the show has ended but guess what it didn’t end. season five came out in 2017 and the show is still alive. I’m glad the show is still alive.
Read more
One person found this helpful
Helpful
Comment Report abuse

Marine_Wifey
5.0 out of 5 stars Glad they decided to bring this show back!!!
Reviewed in the United States on April 1, 2017
Verified Purchase
I loved this show, and this week the new season is about to begin... I'm so excited if your a prison break fan like I am and watched all the previous seasons, then I know you will be just as excited as I am... I love me some prison break!!!
Read more
3 people found this helpful
Helpful
Comment Report abuse

Cindy N.
5.0 out of 5 stars Love Prison Break!
Reviewed in the United States on May 23, 2018
Verified Purchase
I love the Prison Break series. These 2 episodes/movie are a good representation of what happened before the season 4 series finale. (Before they came back with a season 5 in 2017) It answers a lot of questions. Spoiler alert: It's really sad.
Read more
2 people found this helpful
Helpful
Comment Report abuse

Dylan Fulk
5.0 out of 5 stars One of the best TV shows of all-time!
Reviewed in the United States on August 1, 2020
Verified Purchase
Chalk full of incredible characters, Prison Break has been on the top of my list of all-time greatest shows. In fact, Michael Scofield is my favorite television character of all-time, himself. Love Wentworth Miller in that role. The rest of the characters are likable in their own ways, writing is great, acting is tremendous. This TV movie is just as great too. If you're a big PB fan like myself, you'll love it!
Read more
Helpful
Comment Report abuse

Carol
5.0 out of 5 stars Great!
Reviewed in the United States on June 13, 2019
Verified Purchase
Perfect for the Prison break fans that want a closure to the series. If you've watched the 5th season already it will answer question. I suggest watching before you watch the 5th season
Read more
One person found this helpful
Helpful
Comment Report abuse

SIM456c
2.0 out of 5 stars Read before Buying
Reviewed in the United Kingdom on November 29, 2017
Verified Purchase
Didn't realise about the language on purchase but nothing that couldn't be fixed without a few button presses. However this feature is listed as 2017. This is NOT the case. The film was produced in 2009 as a continuation/reproduction of the end of season 4. Check your boxsets carefully before purchasing.
Read more
3 people found this helpful
Report abuse

Anthony Rowley
1.0 out of 5 stars Don't buy
Reviewed in the United Kingdom on April 6, 2017
Verified Purchase
It's the last few episodes of the series
What a waste of time and money
I wish companies would stop cheating people
Read more
5 people found this helpful
Report abuse