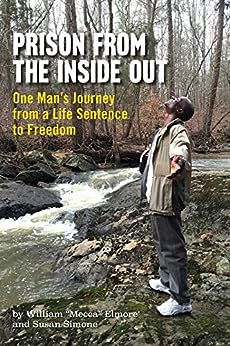 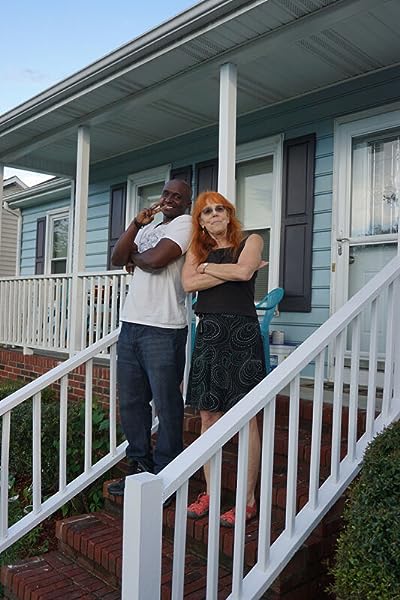 Prison From The Inside Out: One Man's Journey From A Life Sentence to Freedom Kindle Edition

"Prison from the Inside Out by William "Mecca" Elmore and Susan Simone is a powerful storydepicting the struggles in the life of William and his family, his lifeat the prison, and their indomitable spirit that lifted them from darker days. The story also sheds light on a number of critical issues,questioning the nature of justice in the societal system that we livein, hinting towards the need for reform.
Williamwas convicted for shooting a person, although he had not intended tohurt anyone. His aim was to save his friend from an embroilment, butthat very same friend testified against him at the court. This book, atany point, doesn't try to conceal the crime. It speaks about things asit happened and forces the readers to analyze deeply why we are carrying forward a system that is essentially flawed.
Thenarrative takes us through the journey from his teenage to hisintroduction into the world of crime and drugs. The story is woven withutter truthfulness, bringing out the harsh realities that often eludeus. The book provides a fresh perspective regarding the ones who spendtheir lives behind bars, falling prey to an inefficient system.
The book's subtitle 'One Man's Journey From a Life Sentence to Freedom' aptlyreflects the crux of the matter. It's in not giving up that Williamfinds his freedom, and Susan Simone records his words with greatarticulation, grasping its essence aptly. The image of the prison daysbecomes gloomy, scary, and brutally real, but the hope at the end of the tunnel keeps the reader hooked throughout. With the help andunconditional support of his mother and sister, William learns to seethat ray of hope. And to know how he goes about it, you have to givethis book a read.
Thanks tothe oral history method the author has used, each and every incidenttaking place in the lives of William and his loved ones come alive inthe readers mind. It sends a strong message of hope and relentless will, that steers away from the gloomy sadness of a life sentence. This bookis an exemplary read for anyone who wishes to look at the larger picture of the justice system." - Literary Titan

In 1993 Mecca was convicted of first degree murder and sentenced at the age of 23 to spend his natural life in prison. He had been dealing drugs, shot a gun and a man had died. Mecca fired in self-defense, but the jury disagreed. Before trial, Mecca was offered a plea that required he plead guilty to murder with intent. Mecca refused to sign. For the next 24 years he lived as a lifer in eleven North Carolina prisons. In 2011, Mecca learned about the MAPP, a program that offers offenders who committed crimes before October 1, 1994, the opportunity to be granted a parole. In 2012, Mecca was granted a MAPP, awarded honor grade and moved to the Orange Correctional Center, a minimum security prison. On Dec. 15, 2015 he was released. Since regaining his freedom, Mecca has committed himself to outreach. He works with youth through RSN, a support network for young people with problems related to addiction. He is involved in prison ministry, mediation, arbitration support, and teaches job-readiness workshops at Step Up Ministries in Durham. Mecca is a founder and lead facilitator for Wounded Healers, a program that brings together people who have been released with the incarcerated., and a member of the board of The Human Kindness Foundation. Outside of work, Will is an avid athlete and a certified personal trainer.

Simone is a documentary photographer and oral historian. Her documentary projects include: We Are All Housekeepers (an exhibition about labor history on the UNC campus), Fotos del Pueblo (an early look at the emerging Latinx community in North Carolina), Habitat For Humanity: Celebration 2000, and Nepal and Tibet: The People Who Live in Shangri-La (a collaboration with renowned Nepali poet Manjul). In the 1990's and early 2000's Simone served as the coordinator of the Prison Pen Pal Project for the North Carolina Writer's Network, pairing professional writers with aspiring incarcerated writers. She also taught creative nonfiction in the North Carolina Correctional Center for Women. In 2009, Simone began offering a workshop at the Orange Correctional Center in Hillsborough, NC, incorporating writing, film, art, and spoken word in an eclectic weekly learning circle. When she is not doing her part to stop mass incarceration, Simone works as a technical writer, editor, and yoga instructor. Her previous written work includes numerous short form fiction and technical publications and the books --This text refers to the paperback edition.

Steve B
3.0 out of 5 stars Real Insight Into How Prison Affects The Family
Reviewed in the United States on April 12, 2021
The concept of this story fascinated me. I really wanted to understand the events and situations that led someone to commit a crime that got them locked up for life. Then, I wanted to understand how he and his friends and family dealt with the trial and imprisonment, and finally life after prison. I thought this book did a good job with this, but could have benefited from some tighter editing as too many of the stories felt like we heard more details than we needed. Like when his dad calls and he mentions the part about his dad catching a crappy fish. It's certainly the kind of thing one shares on a call, but it didn't help move the story along..

The dedication of his mother and sister is incredible and even after he gets out their work is inspiring. Frankly, I wished the author delved a bit more into some of that work and the work to rectify the school to prison pipeline.

That said, there really is a lot to like about this book and understanding one man's growth in and out of prison. A few favorite quotes, points, and paraphrases follow.

Interesting that he felt the prison administration never wanted you to get to comfortable with staff or other inmates. If you did, that's when they'd transfer you.

He points out one big difference between being on the street and in prison is you can't just check out and take a day off. There is no off switch.

After being moved to a new prison, he writes in his journal, "It smells like apathy here…."

His advise to other inmates, "You've got to get ready for freedom, because it is so different from prison."

He's pretty philosophical about a lot of things, like forgiving his father. Mecca figures, he got a second chance by getting out of prison, so why shouldn't he give that same chance to others?
Read more
2 people found this helpful
Helpful
Report abuse

Book Reviews By Tara
3.0 out of 5 stars A Honest and Authentic Look At Prison Life
Reviewed in the United States on February 25, 2021
𝐏𝐫𝐢𝐬𝐨𝐧 𝐅𝐫𝐨𝐦 𝐓𝐡𝐞 𝐈𝐧𝐬𝐢𝐝𝐞 𝐎𝐮𝐭 is the story of how William "Mecca" Elmore served his time in prison after being sentenced to mandatory life for committing murder while attempting to save his friend from a drug deal gone bad.
⠀
Written by Mecca and Susan Simone, this interview style memoir provides a very detailed account of Mecca’s journey both in and out of prison. The book not only chronologicals Mecca’s journey, it also details the journey of Mecca’s mother and his sister, as they provided Mecca unwavering support from outside the prison walls.
⠀
This memoir reads like a case study, an intensive look into how to survive the prison system. What I like most is that Mecca uses his story to inspire other inmates. Imprisonment can take a huge toll on an individual’s mental health. Prisoners often experience a loss of purpose while serving time. Add to that the loneliness of being separated from their loved ones, as well as the stressors of prison life, and the psychological affects can cause a mental breakdown. By sharing his story and providing a blueprint of what he did to survive his time in prison, Mecca delivers inspiration for those that need it most...prisoners.
⠀
My biggest challenge with this book was it’s length. Simply put, it was way too long for me. Susan interviews many different people including Mecca’s family, prison mates, bosses, friends and public defender. Although I understand the importance of knowing each person’s perspective, I think the book would have been more impactful if it were shorter. I found reading a 390 page interview a little daunting at times.
⠀
Although, I was able to appreciate Mecca’s journey, the book itself didn’t resonate with me. However, I do believe there are a lot of people that will both enjoy and benefit from reading Mecca’s story. This book just may be a light in someone’s dark tunnel.
⠀
𝘕𝘰𝘵𝘦: 𝘛𝘩𝘪𝘴 𝘦𝘣𝘰𝘰𝘬 𝘸𝘢𝘴 𝘱𝘳𝘰𝘷𝘪𝘥𝘦𝘥 𝘣𝘺 𝘏𝘶𝘮𝘢𝘯 𝘒𝘪𝘯𝘥𝘯𝘦𝘴𝘴 𝘍𝘰𝘶𝘯𝘥𝘢𝘵𝘪𝘰𝘯 𝘷𝘪𝘢 @𝘯𝘦𝘵𝘨𝘢𝘭𝘭𝘦𝘺 𝘪𝘯 𝘦𝘹𝘤𝘩𝘢𝘯𝘨𝘦 𝘧𝘰𝘳 𝘮𝘺 𝘩𝘰𝘯𝘦𝘴𝘵 𝘳𝘦𝘷𝘪𝘦𝘸.
Read more
Helpful
Report abuse

Shannan Harper
4.0 out of 5 stars Life in prison to release
Reviewed in the United States on May 1, 2021
This was an honest and interesting read about one man's journey after being convicted and sentenced to life in prison. No only did he serve the sentence, but his family also served alongside with him and was finally able to get him released. The good, the bad and the ugly are all through this real life story. This was a hard, but pretty good read.

I received a copy of the book via NetGalley and am voluntarily leaving an honest review.
Read more
One person found this helpful
Helpful
Report abuse

Leo Tolstoy, Avid Reader
5.0 out of 5 stars Honest and gritty
Reviewed in the United States on February 7, 2021
Interesting narrative containing a wealth of raw emotional history of the lives of the main people in Mecca's life. Honest and gritty details capture the experiences of family members on this journey. Well worth the time to read.

Thank you to netgalley and the publisher for providing a copy of this book to read and review. The opinions expressed here are my own.
Read more
One person found this helpful
Helpful
Report abuse

Anne E. Tazewell
5.0 out of 5 stars A Unique Combo of Oral History & Story Telling
Reviewed in the United States on April 24, 2021
I really like the way Susan Simone wove the words of Mecca Elmore , his family and friends into a 360% view of life in prison , circumstance and personal growth. His is a compelling story and with Simone's oral history skills it makes for a satisfying combo. I recommend this book to those unfamiliar with what life is like behind bars and the power of family and friends to make a difference in the lives of the incarcerated.
Read more
One person found this helpful
Helpful
Report abuse
See all reviews
Back to top
Get to Know Us
Make Money with Us
Amazon Payment Products
Let Us Help You
EnglishChoose a language for shopping. United StatesChoose a country/region for shopping.
© 1996-2021, Amazon.com, Inc. or its affiliates