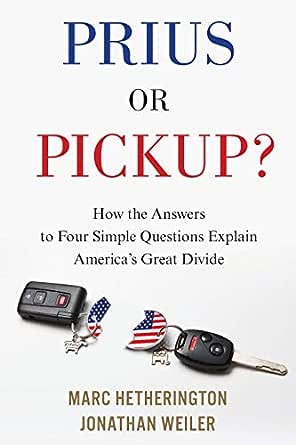 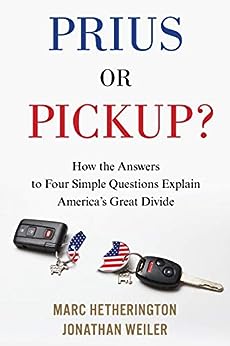 “A fascinating way to look at the fracturing of a nation presumed to be united… [Prius or Pickup?] speaks volumes about how we divide along many fronts, not least of them political.”
—Kirkus

“An exceptionally insightful and entertaining exploration of the roots of tribalism in American (and European) society and politics, and its ominous consequences for democracy. Prius or Pickup? deserves a wide readership.”
—Thomas E. Mann, Senior Fellow, Brookings Institution

“Hetherington and Weiler's use of four simple questions to explain Americans' relationship to politics and each other triggered a fundamental shift in my understanding of U.S. politics. Now they have transformed those ideas into an interesting, readable book. I highly recommend it to anyone trying to figure out what's really behind these turbulent political times.”
—Amanda Taub, Columnist, New York Times

“Hetherington and Weiler’s terrific book reveals how our political thinking is based on worldviews—outlooks which can be quickly and easily ascertained by responses to a few non-political questions. By understanding this phenomenon, hopefully we can someday alleviate the polarization that currently plagues our politics.  The fate of our democracy probably depends on our doing so!”
—John W. Dean, former Nixon White House counsel and New York Times best-selling author of Conservatives Without Conscience

“Today’s Republican voters are very afraid of what they see as a dangerous world, reveals Prius or Pickup? But who, exactly, has sought to intensify their anxiety—and to achieve what? This is the troubling question that will stay with readers of Marc Hetherington and Jonathan Weiler’s book, whose sequel could be titled, Cui Bono? For as the authors point out, scared people are more willing to approve violations of democratic ideals. Who, then, does such fear help?”
—Nancy MacLean, author of Democracy in Chains: The Deep History of the Radical Right's Stealth Plan for America​
--This text refers to the hardcover edition.

Marc Hetherington is the Raymond Dawson Professor of Political Science at the University of North Carolina at Chapel Hill and the author of three previous books, including Authoritarianism and Polarization in American Politics (co-authored with Jonathan Weiler) and Why Washington Won’t Work: Polarization, Political Trust, and the Governing Crisis (with Thomas J. Rudolph), which won the Alexander George Award from the International Society of Political Psychology. Also winner of the Emerging Scholar Award from the Elections, Public Opinion, and Voting Behavior section of the American Political Science Association, he and his work have been widely cited in mainstream media, including the New York Times, the Washington Post, and elsewhere. He lives in Chapel Hill, North Carolina.

Jonathan Weiler is Director of Undergraduate Studies and a professor in Global Studies at the University of North Carolina at Chapel Hill, where he received his Ph.D. in political science. In addition to Authoritarianism and Polarization in American Politics (co-authored with Marc Hetherington), he is the author of Human Rights in Russia: A Darker Side of Reform and, with Anne Menkens, Divorce: A Love Story. He lives in Chapel Hill, North Carolina.

E. M. Griffith
2.0 out of 5 stars I Thought Profiling Was a Bad Thing
Reviewed in the United States on September 6, 2018
Vine Customer Review of Free Product( What's this? )
This will be a long review, folks, because as someone who has owned a Chevy truck and a Ford C-Max hybrid, who doesn’t drink either Starbucks or Dunkin Donuts coffee, has enjoyed dogs and cats as pets, as well as fish, a turtle and a parakeet, it was difficult to read their advance copy book. Like most people, my needs, tastes and financial resources fluctuate. All of which impact where I live, what I drive, the things I buy, etc. Is anyone cookie cutter? Do we all fit into neat little boxes?
That’s the sort of thing Marc Hetherington and Jonathan Weiler overlook. It’s a fundamental misconception of who we are. If you begin with a flawed thesis, the result is a well-researched, erroneous conclusion. From the birth of our nation, worldview has played a significant role in politics and there’ve been political divisions, but the authors explain how various polls, studies and other statistics indicate: “the worldview divide has the potential to imperil American democracy… Many commentators, particularly on the left but more than a few on the right as well, have expressed this fear about Donald Trump.” Please note there’s a clear favoring of one president over another from the introduction on.
Throughout the pages of this book, I wondered who took part in questionnaires, polls and studies conducted by these and other political scientists or think tanks? People stopped on the street? Solicited online? The four questions that explain America’s “great divide” ask parents what qualities they believe are more desirable in their children: independence vs. respect for elders, obedience vs. self-reliance, curiosity vs. good manners, and being considerate vs. being well behaved. Were there any parents who would not choose one trait over another, considering all of them important? Did their studies include people who aren’t parents? It doesn’t matter, because those questions aren’t the crux of their message.
The entire book is dedicated to unapologetic “profiling”. People on the right (fixed) tend towards the familiar and predictable, safety and order, are warier of change, more suspicious of outsiders, and are more likely to drive a pickup truck and eat classic, American foods. Note: they say most ethnic folks are fixed, because [they claim] ethnic groups self-segregate. People on the left (fluid) find social and cultural changes appealing, feel excited by things that are new and novel, “are open to, and welcoming of, people who look and sound different”, and are more likely to drive a Prius and eat exotic meals. Moderates (mixers) aren’t really in the middle, the authors say, but instead tend toward one direction or another. Fluid folks live in urban areas. Fixed folks live in suburbs and rural areas. Presumably mixers live everywhere; it isn’t made clear.
None of which begins to recognize the complexity of human beings… in the U.S. or anywhere else on earth. On my street, in a small town tucked into a rural county, with many cultures, ethnicities, ages and socio-economic ranges, neighbors chat, kids skateboard and ride bikes, and radios play everything from rap to country, mariachi to vintage rock. There are trucks and hybrids, but mostly sedans and SUVs. Therefore, to me, this book is an epic fail with a clear agenda. It’s part of the problem. NOT a solution. I’m giving the authors credit for mountains of “research”, but wish they’d have spent some time with people, getting to know them outside of a laboratory or computer screen, as they would friends or neighbors.
Read more
189 people found this helpful
Helpful
Report abuse

Atlas
1.0 out of 5 stars Mostly recycled information short on objectivity: shrill, churlish, and pedestrian.
Reviewed in the United States on December 15, 2018
Verified Purchase
Several thoughts. First, the theory of the book is overly simplistic and minimizes the importance and significance of party I.D. Party I.D. is stressed insofar that it is associated with worldview, and since it is mentioned only in conjunction with worldview and used only to strengthen the already weak and tenuous theory pushed by the authors, the paramount power of party I.D. is minimized. Also, the book's empirics are jejune. It is short on original survey data, although it cites a multitude of existing studies and polls from ANES and Pew, among others. Absent is any meaty discussion on the role of polarization via party sorting, the increased importance and role of primary voters, or why group identity --- not because of worldview, but because of fewer cross-cutting cleavages and more overlapping cleavages --- has become more relevant and affective and social polarization has intensified. This stab at a novel argument is a failure. Second, the book engages in what it arguably criticizes: biased reasoning and antipathy toward the other side. Sentences suggesting that conservatives are less evolved (p.41) --- because of there greater propensity to fear --- than liberals is counterproductive. Further, the authors seem unaware of, and conveniently refuse to acknowledge, that extreme ideologues on both sides would seemingly favor a stronger leader (p.30-31). If we truly conceptualize the ideological spectrum, totalitarianism appears at both extremes (communism and fascism, e.g. Stalin and Hitler). One side doesn't have a monopoly on favoring these types of leaders. The book is a hodgepodge of surveys, woven together to poorly create a badly biased book that sacrifices/undermines scientific objectivity with its editorialization. The drawn link between hate speech and hate crimes demonstrates a weak understanding of the first amendment (p.188). Finally, Chapter 6 is dedicated to Trump bashing. And this is fine, and warranted, but not under the auspice of an academic book. And, here, the book is also heavy on the hyperbole with parallels continually drawn between Hitler and Nazi Germany, to Trump and contemporary America. The mere fact that our democracy has remained strong during the Trump administration is a testament to the durability of our institutions. I know this hyperbole plays well with the academic crowd at UNC, and the academic crowd in general, but this is the kind of extremist rhetoric which disgusts and repels so many Americans. So, again, the authors propagate the same tactics/behavior/language they rebuke. It is also obscene to equate, in any way, Nazi Germany, and the attendant horrors, with current American society/politics. In sum, this book adds little to our discussion of political polarization in the academy, and could have been written by any competent graduate student.
Read more
43 people found this helpful
Helpful
Report abuse
See all reviews
Back to top
Get to Know Us
Make Money with Us
Amazon Payment Products
Let Us Help You
EnglishChoose a language for shopping. United StatesChoose a country/region for shopping.
© 1996-2021, Amazon.com, Inc. or its affiliates