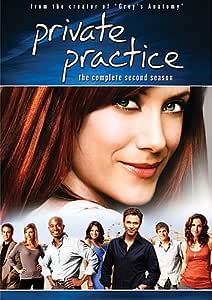 Save with Used - Good
$10.79
FREE Shipping on orders over $25.00 shipped by Amazon.
Arrives: Friday, Jan 22
Ships from: Amazon
Sold by: Integrity Commerce

Experience all the challenges, changes and second chances found in the sizzling hit drama, PRIVATE PRACTICE: THE COMPLETE SECOND SEASON -- from ABC's Golden Globe-winning creator of GREY'S ANATOMY. Check in on the health and welfare of Oceanside Wellness Group's neo-natal surgeon Dr. Addison Montgomery (Kate Walsh) and her perpetually single colleagues as they learn what the phrase "physician, heal thyself" really means. It's time to make the rounds with an all-star cast including Taye Diggs, Amy Brenneman, Audra McDonald, Tim Daly, Paul Adelstein, KaDee Strickland and Chris Lowell. Own every Season Two episode now on 6-disc DVD, and probe deeper into the doctors' ultimate Southern California lifestyle with bonus features. The prognosis is for a unique blend of everything you love most: wit, passion and lots of complications as PRIVATE PRACTICE goes public.

It's easy to see why Kate Walsh's character, neonatal surgeon Addison Montgomery, was spun off from the hugely popular Grey's Anatomy to her own series, Private Practice. It's not just her looks--beautiful but accessible, silent movie eyes, and a forthright jaw--or her obvious intelligence. Her acting has flashes of an uncommon freshness, a sense of unbridled spontaneity. This quality isn't always there, though her performances are never less than capable. But when you catch that moment, that sly twinkle or a flicker of sadness, Walsh is remarkably charismatic. Standing out like that is no small feat when surrounded by such sterling TV and film veterans as Tim Daly, Amy Brenneman, Taye Diggs, Paul Adelstein, and Audra McDonald.

Montgomery works at Oceanside Wellness Centre, a cooperative medical clinic in Los Angeles, where private lives and medical cases collide on a regular basis. In the second season of Private Practice, financial ruin looms over the team as they grapple with such hot-button cultural issues as abortion, teen pregnancy, vaccination, and the right to die, as well as more esoteric issues like accidental incest and a hermaphroditic baby. The doctors engage in vigorous ethical debate and even more vigorous sex as they bounce off each other romantically and professionally. After an uneven first season, the show's skilled writers, producers, and directors have found a tone that smoothly balances moral debate, personal drama, and light comedy. Maybe it's a little too smooth; sometimes the characters' quirks seem overly packaged, their private needs too easily gotten around when the plot demands it. But the show's writers have a gift for swift acceleration. Each episode leaps forward, scenes building on each other until every issue--and every personal complication--has been squeezed for maximum effect. Though moments may push credulity--the season cliffhanger is a jaw-dropper--Walsh and the rest of the charming cast will keep you engaged. --Bret Fetzer

4.7 out of 5 stars
4.7 out of 5
417 global ratings
How are ratings calculated?
To calculate the overall star rating and percentage breakdown by star, we don’t use a simple average. Instead, our system considers things like how recent a review is and if the reviewer bought the item on Amazon. It also analyzes reviews to verify trustworthiness.

Carlie Sheehan
4.0 out of 5 stars Back with a vengance
Reviewed in the United States on January 30, 2011
Verified Purchase
I loved Private Practice right off the bat in the first season. After having the first season cut short by the writer's strike, the show came back strong, and the characters became more evolved.
I LOVE this show to death, even more than Grey's Antomy now, and the 2nd season saw some of the saddest cases ever, and made you love the characters even more. Season 2 also saw the introduction of Brian Benben as Sheldon Wallace, who became a very entertaining character. There was also the multiple episode crossover with Grey's Anatomy, which saw Sam, Addison and Naomi heading to Seattle.

I was a little disapointed that there were no commentaries for season 2, as the season 1 cast commentaries were excellent! But the extended episodes, interviews and featurette on Chris Lowell's photography was pretty cool.

christian graves
2.0 out of 5 stars Have all DVDs in the set.
Reviewed in the United States on December 28, 2019
Verified Purchase
. Would help if all the DVDs for the series was in the case, when I opened it. If I am buying a set, I want all the DVDs, not missing one . Disappointed. This was a gift for Christmas, and was still sealed but not all the DVDs were there.
Read more

Patricia Yue
5.0 out of 5 stars Binge watch them all.
Reviewed in the United States on December 16, 2017
Verified Purchase
Really enjoyed Private Practice, we binge watched them.
Read more
One person found this helpful
Helpful
Report abuse

Phillip Logan
5.0 out of 5 stars Five Stars
Reviewed in the United States on August 4, 2018
Verified Purchase
If you like Grey's Anatomy you'll like Private Practice.
Read more
Helpful
Report abuse

Didi Pratt
5.0 out of 5 stars I Love the Series
Reviewed in the United States on May 25, 2012
Verified Purchase
The product arrived safely and in relatively good shape. The content was what I had anticapated and the very reason it was ordered. I believe it can be assumed that I enjoy the DVD/CD(s). You probably have figured out that I strongly dislike being made to write these reviews. I can see reviewing a book or a product that is being tried for the first time.
Read more
Helpful
Report abuse

Barbie Markley
5.0 out of 5 stars Loved Addison's character in Grey's Anatomy
Reviewed in the United States on March 21, 2016
Verified Purchase
Loved Addison's character in Grey's Anatomy. It's awesome that they have given her her own series. Lots of twists and turns.
Read more
One person found this helpful
Helpful
Report abuse

Bailey Grant
5.0 out of 5 stars Best Show Ever
Reviewed in the United States on March 30, 2018
Verified Purchase
You can’t call yourself a true Grey’s Anatomy fan if you don’t watch ALL of Private Practice. This series is maybe even better than GA. I love it so much!
Read more
Helpful
Report abuse
See all reviews

justantony
4.0 out of 5 stars Practice makes perfect - Season 2 DVD review.
Reviewed in the United Kingdom on August 26, 2017
Verified Purchase
Private Practice season 2 struggles to find its feet and a balance between its stories and characters during the start of season 2. The season finds itself becoming much darker in tone than it needed to be, especially considering the lighter tones of the first season. However, the season does manage to find its feet around the midway point and then becomes a much better show.

The DVD box set clearly defines how many episoes are in the season and the titles of these episodes. The set also contains multiple languages and subtitles and a very welcome assortment of special features.

Amanda
5.0 out of 5 stars Excellent series!
Reviewed in the United Kingdom on August 5, 2010
Verified Purchase
Season 2 of this series is even better than the first! I absolutely loved this and watched the episodes in quick succession. Now desperate for season 3 to arrive! The season ends on a real cliff hanger and very moving episode - I won't give it away. However, I was so desperate to find out what happened I had to Google season 3 to check the outcome! My only moan about the DVD is that on the first DVD it has an overview of the entire season. Don't watch this as it basically tells you what happens throughout the series. I didn't realise this until I started watching and stopped it halfway through - but I'd still seen a preview which basically gave some of the storylines away, which was a bit annoying. Other than that small complaint though, the actual series is excellent.
Read more
Report abuse

Birgitte Maarup
5.0 out of 5 stars Love it!
Reviewed in the United Kingdom on April 6, 2010
Verified Purchase
I love Private Practice! It's fun, it's sunny and it's intriguing.

I really like this season, but oh I thought I was gonna die when I saw the last ep! The cliffhanger is seriously devastating and I just wanted to watch more!

Be aware of the teaser/trailer-ish thing before ep. 1 which you easily can enter without knowing it when pressing play. I was wondering through a couple of episodes if it was a recap of what had happened since we saw season 1 as I'd seen in the bonus material from season 1 that it wouldn't begin right where we left off, so I was really confused. Big bommer that you know how a lot of the episodes will end out. So skip it! Apart from that it's just great, and I can't wait for season 3!!
Read more
Report abuse

Robert J
2.0 out of 5 stars Gabble
Reviewed in the United Kingdom on July 28, 2013
Verified Purchase
The sound quality of this product is abysmal. I have bought, and collected, umpteen American TV series from Mash to Blue Bloods 2 in both Video and DVD formats and have very seldom had trouble understanding the dialog. Not so this series. The conversations during the operations are incomprehensible. This would not be so bad if they had condescended to use sub-titles but they didn't provide them. A complete waste of money.
Read more
Report abuse

Andre86
5.0 out of 5 stars Audio and subtitles
Reviewed in the United Kingdom on September 20, 2012
Verified Purchase
I am an Italian boy fan of private practice I bought the DVD of the second series here because in Italy has not yet been released. Confirm to all the list of audio and subtitles as cover: