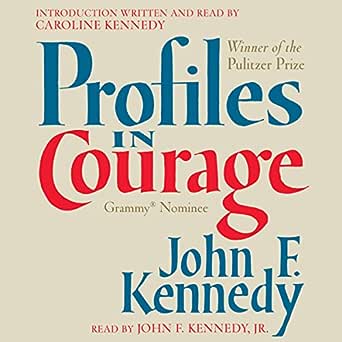 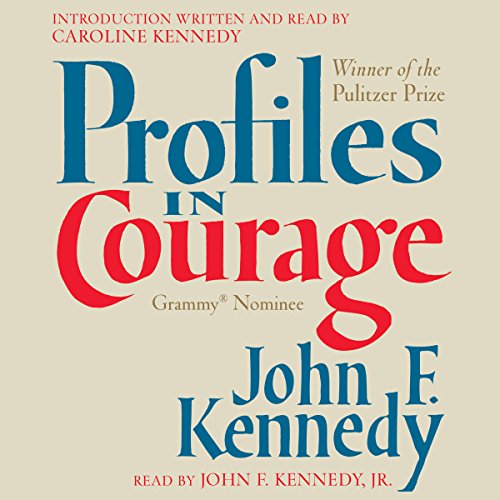 List Price: $18.24
You Save: $2.28 (13%)
By completing your purchase, you agree to Audible’s Conditions Of Use
Sold and delivered by Audible, an Amazon company
Share

4.7 out of 5 stars
4.7 out of 5
974 global ratings
How are ratings calculated?
To calculate the overall star rating and percentage breakdown by star, we don’t use a simple average. Instead, our system considers things like how recent a review is and if the reviewer bought the item on Amazon. It also analyzes reviews to verify trustworthiness.
Top reviews

Jan. Peregrine
5.0 out of 5 stars Nobel Prize Well-Deserved....
Reviewed in the United States on February 26, 2018
Verified Purchase
Published in 1956 while John F. Kennedy was a Senator from Massachusetts, Profiles in Courage received a Pulitzer Prize. Kennedy wrote it while recuperating from back surgery, probably his second one,, and I took my time savoring the bold examples of courageous Senators throughout the nation's history. In his next to last chapter he mentions unpopular political courage by a U.S. President (our first), members of the House, governors, and private citizens, but the eight with their own chapter are independent-minded Senators with consciences that informed their decisions rather than party loyalty and popular opinion.

A few of these Senators have recognizable names, but most do not. They are; John Quincy Adams, Daniel Webster, Sam Houston, John C. Calhoun, Thomas Hart Benton, Edmund Ross, Lucius Lamar, George Norris, and Robert Taft. Only the last man did Kennedy ever meet and the rest were well-researched through biographies, autobiographies, archives, and newspapers.

Kennedy chose these men (no women Senators mentioned)) because they exhibited the integrity and boldness of politicians who were not always right in judgment, but withstood tremendous pressure by their party to fall into line and also terrible abuse by their friends as well as their constituents who felt betrayed. One nearly was thrown in a river. Another nearly hanged. They almost all lost reelection and ruined their political careers because a clear conscience and their constitutional duty meant far more to them. They hoped that in time their decisions would be recognized for their wisdom.

I certainly wish we had more of these kind of Senators today! Kennedy admitted that he couldn't think of a current Senator in 1956 who he could include in his book, besides Taft who retired very soon after Kennedy became a Senator. Would he be able to today? Perhaps.

Profiles in Courage was not simply inspirational for a person interested in the great burden and risk of being a conscientious Senator, but it helped me to understand a little better how rare such a Senator has always been and that voting for them is a privilege we didn't always have as private citizens. I learned a lot about the country's history, particularly how divisive slavery was, and about these fascinating, well-spoken men.

As a Nebraskan I'm thrilled to have learned that my conservative once had a “fighting liberal” Republican Senator in George Norris. Though he wasn't a snazzy dresser or smooth talker, he's responsible for limiting the power of the Speaker of the House and so much more. Nebraskans loved his integrity if not all of his actions. I'm going to read his autobiography.

John Quincy Adams, a young Federalist Senator, really delighted me. His vote allowed President Jefferson, an enemy, to cheaply purchase the Louisiana Purchase that so expanded the United States.

I highly recommend this book to all voting Americans in the hope that more of you will take the time to become interested in our government and vote with your conscience. It's one of the most important things you can do to improve your country and life. Thanks!
Read more
52 people found this helpful
Helpful
Report abuse

Frank DonnellyTop Contributor: Poetry Books
TOP 1000 REVIEWERVINE VOICE
5.0 out of 5 stars I Loved Both The Kindle And ABRIDGED Audiobook, But For DIFFERENT Reasons
Reviewed in the United States on December 28, 2019
Verified Purchase
"Profiles In Courage" is an excellent work of historical non fiction, authored by a then Senator Kennedy in the 1950s before being elected president. It is primarily about eight United States Senators who made courageous choices in the face of controversy. There is a lot of background and other persons ncluded in these stories. As an amateur history student I completely loved this opportunity for reading and study.

I purchased both the Kindle and the audiobook. I loved both of them but for distinctly different reasons. Within the audiobook there is a forward narrated by Caroline Kennedy, the president's daughter. The rest of the narration is done by the president's son. I would not have missed this chance to listen to these narrations and was quite moved by the experience. HOWEVER the AUDIOBOOK is ABRIDGED. Perhaps I should have known that. I will assume that it was my fault that I did not. There is so much more information in the Kindle that I would not have wanted to miss out on.

As is normal for me I did parallel reading as I worked my way through this book. I was happy to discover a biography authored by a then young Theodore Roosevelt about Senator Benton. I am ambivalent about Senator Benton, but that is not the point. I learned so much background information that I felt I had conducted a virtual 100 into level course on American History. It was a completely fulfilling reading, listening, and study experience. Thank You...
Read more
13 people found this helpful
Helpful
Report abuse

Amazon Customer
5.0 out of 5 stars Every American should read this book.
Reviewed in the United States on July 13, 2019
Verified Purchase
If you have not already read this book, you should. It is well written, interesting and informative. President Kennedy wrote this book when he was a United States senator. A large portion of the book is Kennedy's musings on being a United States senator. He discusses the challenges of balancing lawmaking and representing his constituents. The rest of the book highlights several United States senators, and how they made unpopular decisions because they felt that they were the morally correct decisions to make.
Read more
14 people found this helpful
Helpful
Report abuse

AvdRedr
5.0 out of 5 stars Historically important reminder of our form of goverment and those we choose to represent us.
Reviewed in the United States on January 20, 2020
Verified Purchase
Having grown up during the Kennedy Era I was always a fan of his speeches for there insights and frequently delivered humor. In spite of the many references to Profiles in Courage, I had never read it. Although purchased months ago, I am completing it just as the impeachment trial of Donal J. Trump begins in the Senate. What appropriate timing! The book focuses primarily on the Senate and those in congress who have to make the decisions that the rest of us live by. Considerable time is spent in the Forward to the book on the multiple considerations our representatives have to take into account in deciding their vote. As well as the pressures brought to bear by their party, their State, and their constituents on them, both to vote a certain way, or because they voted a certain way. His book emphasizes that courage takes many forms and it generally boils down to the character and integrity of the individual, whether right or wrong in the view of history. Ironically one of the major profiles involved the Impeachment trial of President Andrew Johnson, the first test of this feature of our Constitution. It reads like it is taken from today’s papers. Spoiler alert, he was acquitted. It would do well for all Senator’s to review this book before the trial begins (tomorrow, as of this writing). Will they be a profile in courage? History will judge.
Read more
7 people found this helpful
Helpful
Report abuse
See all reviews

Hr.Leslie J.Maidment
5.0 out of 5 stars Courage and probity
Reviewed in the United Kingdom on March 7, 2020
Verified Purchase
A magnificent book. The men described here helped to forge the future course of the nascent republic. They were not afraid to follow their innermost convictions unlike the current crop of republican politicians - profiles of cowardice - unable to confront and stand up to the flawed policies of the current incumbent in the Oval Office.
Read more
Report abuse

S. Jahromy
4.0 out of 5 stars I am quite happy with the book
Reviewed in the United Kingdom on February 17, 2018
Verified Purchase
I am quite happy with the book. The cover page is shiny white with black and gold writing on it which gives a rather nice appearance. The pages inside on top and bottom are smooth but on the side it is fairly rough an unevenly guillotined which gives the impression that the book has been made professionally up to the point of cutting the pages and then it had been let down.
Read more
Report abuse

Paladin
5.0 out of 5 stars Long lost friend
Reviewed in the United Kingdom on April 10, 2017
Verified Purchase
Had this book as a kid. Lost it. Got it again. Now applying on a mortgage for my house so I can afford to buy his earlier book "Why England Slept" !
Read more
One person found this helpful
Report abuse

Colin D
1.0 out of 5 stars very poorly printed
Reviewed in the United Kingdom on January 14, 2021
Verified Purchase
This is not a comment on the words of JFK, only the quality of the printing of this book. Considering it cost over £13.

It looks like someone printed out the pages on blotting paper, tore the paper roughly the right size and glue them in a cover.

it looks like something someone made at home. It's so appalling it is funny.
Read more
Report abuse