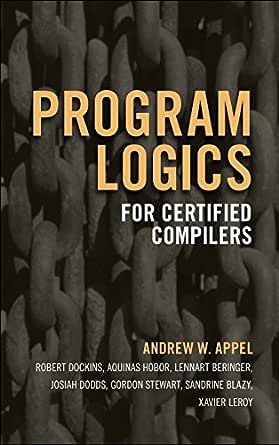 Scan an ISBN with your phone
Use the Amazon App to scan ISBNs and compare prices.
Share <Embed>

This book covers practical and theoretical Separation Logic suitable for graduate students. On the practical side, it covers verification in Hoare and Separation logics, simple case studies, and the Verifiable C program logic. On the theoretical side, it covers separation algebras, step-indexed models, indirection theory, tree-shares, and the semantic construction of Verifiable C. All constructions and proofs are given in the Coq developments of the Verified Software Toolchain.

Andrew W. Appel is the Eugene Higgins Professor and Chairman of the Department of Computer Science at Princeton University, New Jersey, where he has been on the faculty since 1986. His research is in software verification, computer security, programming languages and compilers, automated theorem proving, and technology policy. He is known for his work on Standard ML of New Jersey and on Foundational Proof-Carrying Code. He is a Fellow of the Association for Computing Machinery, recipient of the ACM SIGPLAN Distinguished Service Award, and has served as Editor in Chief of ACM Transactions on Programming Languages and Systems. His previous books include Compiling with Continuations (1992), the Modern Compiler Implementation series (1998 and 2002) and Alan Turing's Systems of Logic (2012).

Peter J Goodall
2.0 out of 5 stars Table of Contents not hyperlinked. Hold off buying until this is fixed.
June 29, 2018
Format: Hardcover
I am looking forward to reading this, but I won’t until the table of contents and index are hyperlinked.
It is poor practice on the part of the editors to allow this through without these links implemented. Highly likely that the appropriate metadata is already in the source documents.